Direct Traffic Control (DTC) is a system for authorizing track occupancy used on some railroads instead of or in addition to signals. It is known as "direct" traffic control because the train dispatcher gives track authority directly to the train crew via radio, as opposed to through wayside personnel via telephone or telegraph, as in train orders. 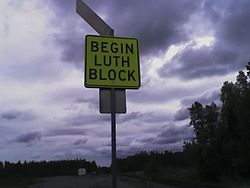 A DTC block sign for the Luthman block on the Alaska Railroad.

In DTC, controlled tracks and sidings (those requiring authority from the train dispatcher to occupy) are divided into pre-specified blocks. In addition to being listed by milepost in the railroad's timetable, block limits are delineated by conspicuous signs along the tracks. Every portion of controlled track belongs to a block, as blocks are laid out back-to-back along the entire length of the rail line.

For example, a 30-mile (48 km) length of main line track may be divided into three blocks, Anna, Bess, and Cloy, each 10 miles (16 km) long. At milepost 10, there will be a sign displaying the end of Anna block and the beginning of Bess block, and a similar sign between Bess and Cloy. A train authorized in Anna through Bess blocks must stop before Bess block ends and Cloy block begins.

For example, a length of track may consist of three blocks. Anna, Bess, and Cloy. There is a siding at Bess, and this siding is specified as Bess Siding. Both Bess and Bess Siding blocks extend to the switches at either end of the siding. Anna and Cloy blocks begin on the other side of their respective switches. Neither Bess nor Bess Siding blocks may be occupied without authority from the train dispatcher.

In this example, a train may have authority straight through from Anna through Cloy. Or, it could have authority in Anna through Bess Siding, in which case it must throw the switch between Anna and Bess and enter the siding--this will usually be done to clear up the main track in preparation for an opposing train to pass. Then, it might get authority from Bess Siding through Cloy, in which case it will throw the switch between Bess and Cloy and reenter the main track.

While most DTC blocks are laid out back-to-back, the blocks actually do not touch at sidings. Instead, there is a "gray area" over the siding's switches, and the main track's and siding's DTC blocks begins at approximately the clearance point of the switch. The area over the switch must not be occupied unless authority is granted in blocks on both sides of the switch. For example, a train authorized only in Anna block must stop at the End Anna Block sign, which is a short distance from the switch points. A train authorized in Anna through Bess or in Anna through Bess Siding may proceed past the End Anna Block sign, over the switch, and then past the Begin Bess (or Bess Siding, if appropriate) Block sign.

Blocks are typically named after a distinguishing feature within the block, such as a station, town, or river.

Normally, only one train or piece of equipment may occupy a given block at a time, and a train must release their authority in a block in order for the train dispatcher to authorize another train into that block. Barring human error, this ensures that no two trains are ever authorized on any given piece of track at the same time, thereby preventing collisions. (In certain circumstances, dispatchers will authorize more than one piece of equipment--as in the case of track maintenance vehicles--into the same block. When this occurs, the authority is marked as "joint," and all movements must be made at restricted speed, which allows stopping within half the range of vision.) Another key feature of DTC is that only one authority is in effect for any given train at any given time. When a dispatcher issues a new authority to a train, the previous authority becomes invalid and must not be used.

In modern implementations, dispatchers rely on computerized systems to keep track of trains that have received authority. Typically, the computer will prevent the dispatcher from giving two trains authority over the same track. The computer system generally displays a highly simplified mock-up of the track, displaying the block limits and sidings. Track occupancy is displayed via bold or colored lines overlaying the track display, along with tags to identify the train (usually the number of the lead locomotive).

Numbers are always repeated in an alternate format to ensure clarity and prevent misunderstandings. Numbers from zero to nine are spelled out, while numbers greater than ten are given by their individual numerals. For example, the number six would be given as, "Six, s-i-x," while the number 14 would be given as "fourteen, one-four." Engine numbers such as 2001 are usually read first as "two thousand one," while numbers such as 4321 are usually read as "forty-three twenty-one," although this is mostly a personal preference about what is easiest to say. Regardless, the repeat will give the individual numerals, as in, "Engine twenty-eight oh eight, two, eight, zero, eight."

A sample issue format would be as follows:

When trains must meet en route, one train must be authorized into the siding. For example, train 5432 may be authorized from Anna into Bess Siding:

An opposing train will be authorized in two blocks, Cloy through Bess, using a similar format:

Once train 5432 has fully entered the siding and restored the switch for movement along the main track, they will call the dispatcher and release Anna block, using the following format:

After the 5432 has released its authority in Anna, the dispatcher may issue a new authority to the 4321 authorizing them through Anna block. Since only one authority is valid at any given time, if the 4321 is still in Cloy block, the dispatcher will give the new authority containing Cloy through Anna. Once the 4321 is fully within the Bess block and has cleared Cloy block, the conductor or other crew member will call the dispatcher and release Cloy. The dispatcher will then issue a new authority to the 5432, giving them authority from Bess Siding block through Cloy block. This generates additional radio traffic but ensures that there is no confusion as to which train is allowed to enter a given block at any given time. Some railroads have instituted a practice which allows a train to enter a block contingent upon the passing of the opposing train, although the National Transportation Safety Board has recommended against this practice. A DTC authority given under this practice will include a phrase such as "This line is not in effect until after the arrival of train 7940."

Entering a block in which the train is not authorized or releasing a block which the train still occupies is considered a main-line violation by the Federal Railroad Administration and carries stiff penalties for all crew members, which may include time off from work and the suspension or revocation of the engineer's license.

The Southern Pacific Railroad, now the Union Pacific, implemented DTC on several of its lines formerly controlled by train orders (most of the rest of UP's lines use Centralized Traffic Control). The BNSF Railway does not use DTC; it uses mostly CTC with track warrants in its non-signalled territory. The Alaska Railroad changed its Track Warrant Control territory to DTC and is also implementing CTC in high-traffic areas. Queensland Rail in Australia uses the DTC system in some of the lower traffic areas in the western area of the state. CSX uses DTC on their former Georgia railroad mainline from Scottdale, just east of Atlanta, to Augusta.