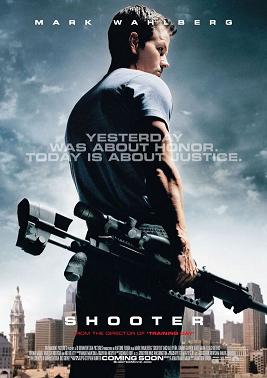 
"Shooter" is a 2007 action/ thriller directed by based on the novel "" by . The film is about a former , () who is framed for murder by a rogue CIA unit.The film was shot mainly in , . It was released on , . The film's DVD was released on , , reaching the top of the sales charts. [ [http://www.cinemablend.com/dvdnews/DVD-Sales-Shooter-Knocks-Out-Competition-5070.html DVD Sales: Shooter Knocks Out Competition ] ]

Bob Lee Swagger (Wahlberg), retired Marine , is one of the few s in the world whose sharpshooting abilities allow him to "take out a target from a mile away." He reluctantly leaves a self-imposed exile from his isolated mountain home at the request of Colonel Isaac Johnson (Glover) and a team of agents. Johnson appeals to his expertise and patriotism to help track down a purported presidential assassin who plans on shooting the president from a great distance with a high powered rifle. Johnson gives him a list of 3 sites where the President is scheduled to visit so Swagger could determine if an attempt could be made at any of them.

Swagger assesses each of the locations given to him by Johnson and determines that a site in would be most conducive to a long range assassination attempt. He passes this information to Johnson, who purportedly arranges for a response. This turns out to be a set-up: while Swagger is working with Johnson's agents—including a local police officer—to find the rumored assassin, the n archbishop is instead assassinated while standing next to the president. Swagger is shot by the officer, but manages to escape. The agents tell the police and public that Swagger is the shooter, and stage a massive manhunt for the injured sniper. However, Swagger has a stroke of luck—he meets rookie FBI agent Nick Memphis (Peña), disables him and steals his car.

He is thus able to use the first aid supplies in the car to staunch his wounds and escape by driving into the river after an extended chase. He then takes refuge with Sarah Fenn (Mara), widow of Swagger's late spotter and close friend Donnie Fenn, killed years before in a mission in that saw Swagger himself barely surviving. She saves his life by cleaning and stitching Swagger's gunshot wounds, and Swagger later convinces her to help him contact Memphis with information on the conspiracy. Memphis is blamed for allowing Swagger's escape, and is disciplined for negligence. However, he has independently learned that Swagger may have been framed for the assassination by noticing several inconsistencies with the data and witness accounts given to the FBI by an unnamed federal agency.

Once the rogue agents realize their secret has been compromised, they kidnap Memphis and attempt to stage his suicide. Swagger tails the agents and kills Memphis' captors with a scoped .22 rifle equipped with a homemade silencer. Swagger and Memphis then join forces against the rogue agents and visit a firearms expert () living in . Together they plot to capture who they think is the real assassin, an ex-sniper allied with Colonel Johnson. Once they find him in , he commits suicide after revealing that the archbishop was actually the real target of the assassins, and he was murdered in order to prevent him from speaking out against U.S. involvement in the genocide of an Ethiopian village. The genocide occurred in order to advance the aims of a consortium of American corporate oil interests headed by corrupt U.S. Senator Charles Meachum (Beatty); Swagger learns that the mission where Fenn was killed was also a part of the genocide as they were tasked to cover the withdrawal of the contractors assigned to the job. Swagger records the ex-sniper's confession as proof of the involvement in the African genocide, then with Memphis's assistance is able to escape from the trap set to ensnare them by killing all 24 mercenaries.

Meanwhile, other rogue mercenaries have kidnapped Sarah Fenn in order to entrap Swagger. With his new evidence and cat-and-mouse strategy, Swagger and Memphis are able to rescue her when Colonel Johnson and Senator Meachum arrange a meeting to exchange their hostage for Swagger's evidence of their wrongdoing. After killing several enemy snipers in an isolated mountain range and rescuing Sarah, Swagger and Memphis finally surrender to the FBI.

Later appearing in a closed meeting with the head of the FBI and the present, he clears his name by loading a rifle round (supplied by Memphis) into his rifle (which is present as evidence as it was supposedly used in the killing), aiming it at the Colonel and pulling the trigger—which fails to fire the round. Swagger explains that every time he leaves his house, he replaces the firing pins from all his rifles with slightly shorter pins, rendering them unable to fire until he replaces them again. Unfortunately, although Swagger is exonerated, Colonel Johnson takes advantage of a legal loophole—the Ethiopian genocide is outside American legal jurisdiction—and walks free. The attorney general approaches Swagger and states that as a law enforcement official, he must abide by the law(he insinuates that if it was the wild west of before it would be appropriate to clean the system with a gun)—and Swagger is seen considering that statement. Afterwards, the Colonel and the Senator plan their next power play in the Senator's vacation house—only to be interrupted by Swagger attacking the house. He kills both conspirators, one of the Colonel's aides and two bodyguards, then breaks open a gas valve before leaving. The fire in the fireplace ignites the gas, blowing up the house. The final scene shows Swagger getting into a car with Fenn and driving away.

Differences between the novel and the screenplay

The greatest difference between "Point of Impact" and "Shooter" is that Swagger in the novel is in his 40s, a veteran of the war in , while in the film Swagger was a younger veteran of 1990s combat in . Sarah is likewise much younger. Otherwise, the film largely follows the novel, though several subplots are eliminated or modified for the sake of brevity. The character of Nick Memphis is reduced from a major, well-developed character (also a trained sniper) to a sidekick, and his relationships with supervisor Howard D. Utey and a female coworker are barely addressed.

Utey's last name is even changed, eliminating the "Howdy Duty" plot line. In the novel, Utey was connected to the conspiracy, and attempts to influence Memphis' testimony in the climactic trial. In the film, Howard is little more than a bit part. Dobbins (Dobbler in the novel), the psychologist, loses all depth of character—he is killed in the "final comeuppance" scene. In the novel, the Colonel is killed during the fight on the mountaintop, as is the wheelchair-bound sniper. The climax in the novel is Swagger's public trial, in which Swagger's innocence is proven the same way, but in front of a media-packed courtroom (with Howard D. Utey being the big loser). The film features a secret hearing, with the climax taking place in the Senator's cabin.

"Shooter" depicts a number of sniper tactics, thanks to the guidance of former U.S. Marine scout sniper Patrick Garrity, who trained Mark Wahlberg in sniper tactics. Garrity taught Wahlberg to learn shooting both left and right-handed (the actor is left-handed), as he had to switch shooting posture throughout the movie, due to Swagger's sustained injuries. He was also trained to adjust a weapon's scope, judge effects of wind to a shot, do rapid bolt manipulation and develop special breathing skills. His training included extreme distance shooting (up to 1,100 yards), and the use of camouflague s. Fuqua appointed Garrity as the film's military technical advisor. [ [http://www.visualhollywood.com/movies/shooter/about4.php Shooter (2007) - WAHLBERG GOES TO SNIPER SCHOOL: ABOUT TRAINING AS A SHOOTER ] ]

Throughout the film Swagger uses an array of sniper weapons, among which are the M40A3 rifle [ [http://www.ugo.com/ugo/html/article/?id=16981 UGO.COM - Patrick Garrity, Shooter Interview ] ] and Barrett M107 [ [http://www.dvdtown.com/reviews/shooter/4973 Blu-ray review of Shooter - DVDTOWN.com ] ] sniper rifles and Donnie Fenn used an with a M203 grenade launcher and M68 Close Combat Optic in the African opening sequences, Cheyenne Tactical M-200 Intervention in .408 CheyTac [ [http://www.markwahlberg.com/viewtopic.php?t=12954&sid=6c164440efda8b36fffb1fde5cff2a3c MarkWahlberg.com :: View topic - CheyTac M200 - Bob Lee's weapon of choice ] ] [ [http://the-download-munkey.blogspot.com/2007/03/cheytac-m-200-in-shooter.html The Download Munkey (Archive): CheyTac M-200 in Shooter ] ] used to shoot the Dinty Moore stew can, and in .300 Winchester Magnum. [ [http://www.beyondhollywood.com/shooter-2007-movie-review/ Shooter (2007) Movie Review | BeyondHollywood.com | Asian, Foreign, Horror, and Genre Movie Reviews and News ] ] Weapons used by Swagger include a and a commandeered M4 Carbine with reflex sight, in the fight against the 24 mercenaries and a Colt M1911-A1 in the final shootout scene.

The score to the film was composed by , who recorded the music at the Scoring Stage in , using a 77-piece orchestra conducted by .