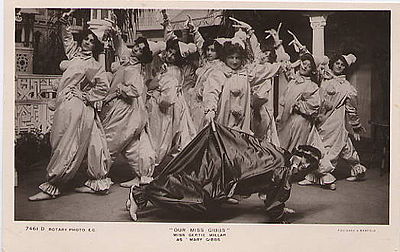 The cast of Our Miss Gibbs 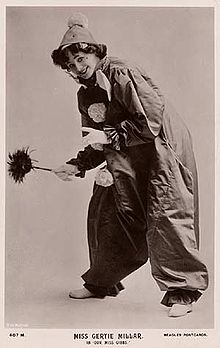 Our Miss Gibbs is an Edwardian musical comedy in two acts by 'Cryptos' and James T. Tanner, with lyrics by Adrian Ross and Percy Greenbank, music by Ivan Caryll and Lionel Monckton. Produced by George Edwardes, it opened at the Gaiety Theatre in London on 23 January 1909 and ran for an extremely successful 636 performances. It starred Gertie Millar, Edmund Payne and George Grossmith, Jr. The young Gladys Cooper played the small role of Lady Connie.

The show also had a short Broadway run in 1910.[1] It was revived at the Finborough Theatre, London, in May 2006. This was the first professional London production since 1910. The piece was regularly revived by amateur theatre groups, particularly in Britain, from the 1920s into the 1950s but it has been produced only rarely since then.[2] Our Miss Gibbs was revived by Lyric Theatre in July and August 2011 at the Mountain View Center for the Performing Arts and the Lesher Center for the Arts in Walnut Creek, California. The revival featured a cast of 22 and a 9-piece orchestra. [1]

Mary Gibbs is a Yorkshire lass who, in 1908, has found work at Garrods in London as a shop girl, selling candy. The young men are making themselves ill eating the sweets they buy to gain the attention of the beautiful, but no-nonsense Mary, who disapproves of their attempts at familiarity. Miss Gibbs has fallen in love with a young bank clerk who is actually the son of an Earl, Lord Eynsford, in disguise. His father would not consent to his marrying a shop girl. When she discovers that young Eynsford has lied to her, she breaks up with him.

Mary's cousin Timothy travels from Yorkshire to play in the town band for a contest at the Crystal Palace. He is a very unsophisticated country boy, and he has a variety of humorous big city adventures. Timothy gets entangled in a crime by mistakenly picking up a bag. Inside the bag is the Ascot Gold Cup (the trophy for Britain’s most prestigious long-distance horse race). The cup has just been stolen by the Hon. Hughie Pierrepoint.

At the Franco-British Exhibition in White City, Timothy worries that the police will find him and accuse him of the crime. He disguises himself as a contestant in the Olympic marathon race. When he staggers into the stadium, he is mistakenly declared to be the winner. The Gold Cup is eventually recovered and returned to its owner, who is coincidentally Lord Eynsford. He is now so enchanted with Mary that he is eager for her to become his daughter-in-law, and all ends happily.