Mooroolbark is a suburb of Melbourne, Victoria, Australia, 31 km east from Melbourne's central business district. Its Local Government Area is the Shire of Yarra Ranges. At the 2006 Census, Mooroolbark had a population of 19,335. Mooroolbark is at an altitude of approximately 93m.

“Mooroolbeek” is popularly thought to be the name given by the local Wurundjeri Aboriginal people ("moorool" meaning red and "beek" the earth). An alternative meaning of Mooroolbark being "the place where the wide waters meet" is recorded by Museum Victoria.[2] Another meaning recorded is "red bark".[3]

The Parish of Mooroolbark was surveyed in 1855, with a township originally called Brushy Creek standing where North Croydon is today. The name "Mooroolbark" was to be popularised with eventual European settlement in the late 19th century. A rural hub developed around the train station, which opened in 1887 and offered rail access to Melbourne. The Post Office opened shortly after on 15 March 1888.[4]

Wonga Park used to be a part of Mooroolbark until the early 20th century when it became a separate suburb. Another locality called Mooroolbark Park was later renamed as Chirnside Park. 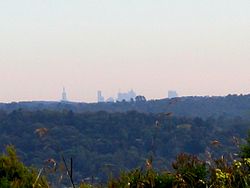 View of Melbourne skyline from Mooroolbark

Mooroolbark has a train station which is on the Lilydale railway line. It has 595 car parking spaces.[5]

A number of bus routes serve the Mooroolbark area.

In addition, Telebus services, where passengers can request to be picked up or dropped off from home, also operate in the area.

Located in Mooroolbark is one of Melbourne's most unusual intersections between Hull Road, Lincoln Road, Manchester Road and Cambridge Road: three consecutive roundabouts (pictured). Initially, the three latter streets simply connected to Hull Road at close, but slightly different, locations. In order to eliminate the troubles caused by vehicles failing to give way to those coming from other adjoining streets, it was decided to build individual roundabouts at each intersection, and employ the standard 'give way' road rules. This has cleared up most of the troubles on Hull Road (southwest to northeast), but the prospect of passing through the intersection for those who don't know it may be a little daunting. This intersection is usually referred to as "Five Ways" or "The Mooroolbark roundabouts" and can be a waiting game in peak hour traffic.

Brice Avenue, the main shopping strip has a strict alcohol-free policy in place. The Alcohol Free Zone, if breached, may result in a fine of up to $2000. Under this law, anyone carrying an uncorked or unsealed alcoholic beverage, within the Mooroolbark township, can be fined at the discretion of the police. However, this doesn't apply to restaurants with an appropriate licence. Alcohol must be consumed within the licensed premises only, if the beverage is taken outside the premises in the public domain, police can issue a fine.

Mooroolbark has a 24-hour police station. It is located at the corner of Hull and Cambridge Roads ("Five Ways"), 700 metres from the Mooroolbark train station and town centre.

There are a number of Primary and Secondary Schools within Mooroolbark offering a choice between Government and Private education.

Another point of interest within Mooroolbark is the Mooroolbark Community Centre, which has undergone radical changes since 2004 as part of a civil beautification and anti-graffiti project. The community centre is now surrounded by colourful mosaics and street art, including a stencil art representation of Mooroolbark's most famous citizen, the early 20th Century landscape designer Edna Walling.

The first Blue Light Disco in Australia[6] was held in Mooroolbark in 1976.[6] The 'Blue Light Disco', specifically a local Victoria Police initiative,[6] is now a well-known attraction for teenagers Australia-wide.

Most of Mooroolbark is in the catchment of Brushy Creek, a tributary of the Yarra River. A number of environmental concerns exist because of its location almost entirely within an urban environment.[13]

From 1980 to 2001, Mooroolbark had the 'Red Earth Festival', usually on the third or fourth weekend of March every year beginning on Friday evening and running all day Saturday and Sunday. The 'Red Earth Festival' had many stores and carnival rides. The highlights of that festival included a parade on the Saturday, which began in the grounds of the former Mooroolbark Primary School (which closed at the end of 2004) and went down Brice Avenue towards the fairground. On the Sunday, the festival hosted an open air market followed by a fireworks display at night. Due to a number of problems including falling attendances and a significant increase in insurance premiums, the Red Earth Festival ran for the last time in March 2001.

Since 2002, there has been a smaller festival known as 'Celebrate Mooroolbark', running on a Saturday at around the same time of the year. The 2011 Celebrate Mooroolbark Festival will be held on Saturday 26 March, with the Festival's Talent Quest on the preceding evening.

Mooroolbark Soccer Club "The Barkers" - originally founded as a Dutch team with the name Mooroolbark United Soccer Club in 1962, Mooroolbark's backing changed to a British influenced club in its formative years. In 1978 the United tagline was dropped from the name. The club's claim to fame is as Victoria's (and Australia's) first national sporting club side. Mooroolbark enabled the National Soccer League to proceed, breaking the deadlock which was then in force between the budding national league and clubs from Victoria whom the Victorian Soccer Federation had forbidden to join the competition.

In 1836 John Gardiner, one of the first to bring cattle down from the Murrumbidgee in New South Wales to the Port Phillip District, was looking for some stray cattle east of Melbourne. His search took him via the Eltham and Yarra Glen areas to where Mooroolbark now is, and he found his cattle near the Olinda Creek. News of this new grazing land travelled back to Melbourne, and graziers soon brought their stock up the Yarra Valley. The first farmers in Mooroolbark were John Lithgow in 1845 and Robert Blair in 1847.

The early 20th Century landscape designer Edna Walling purchased 3 acres (12,000 m2) of land at Mooroolbark and built her first home from local and second hand materials. This home was named Sonning, after Gertrude Jekyll's Deanery Garden, Sonning, an English garden she had visited. Her property is now the Bickleigh Vale Estate in the eastern part of Mooroolbark, which is a private residential area but in the past has been open for public display as part of Australia's Open Garden Scheme. A stencil art representation of her is located at the Mooroolbark Community Centre.

Sam Mitchell, is an Australian Rules Football premiership captain and was born and raised in Mooroolbark. Prior to playing in the Australian Football League he played for the local club in Mooroolbark before moving to the Box Hill Hawks.