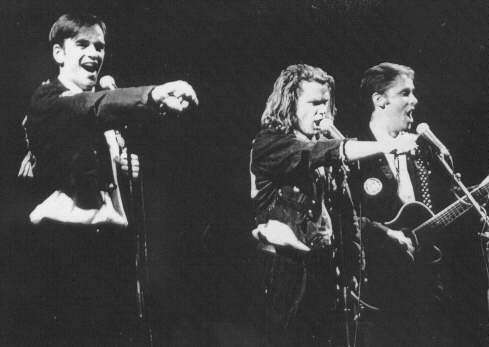 Paul McDermott (born May 13, 1962) is an n , , and television host. He currently hosts the satirical news-based quiz show "" which airs in Australia on . As a comedian, he is best known both for "Good News Week" and for his role as a member of the musical comedy group the , which disbanded in 1994; he has also performed individually and as a part of GUD. He has frequently appeared at the and taken part in its two major televised productions, the Comedy Festival Gala and the Great Debate. He has also hosted two other ABC programs and briefly featured on as a morning radio presenter between 1996 and 1997.

McDermott is a published author, having released several books both in collaboration with the Doug Anthony All Stars and individually. He has written as a columnist for a number of Australian newspapers and a selection of his columns have been compiled into a book, "The Forgetting of Wisdom". He has also written and illustrated two storybooks, both of which have been adapted into short films with McDermott scripting, directing, performing and painting all of the animations.

McDermott was born in , a fraternal twin and one of six children in a family. His father, John, was a senior public servant and his mother, Betty, a home manager. The family moved to when McDermott was three. [cite web |author=Trenoweth, Samantha | url=http://www.geocities.com/tangawarra/paulart5.html | title=News Boy |work=Juice |date=August 1998 | accessdate=2008-07-19]

McDermott is a self-described who says that his political leanings lie somewhere between ultra- and the "depending on the time of day". [cite web |author=McDermott, Paul | url=http://www.geocities.com/tangawarra/paulart6.html | title=Interview: Paul McDermott: "May Your News Be Good News" |work=Morph |date=1998 | accessdate=2008-07-19] [cite web |author=Fidgeon, Robert | url=http://www.geocities.com/tangawarra/paulart13.html | title=Good To Be Back |work=Herald Sun |date=2000-02-23 | accessdate=2008-07-19] He has criticised the and society's tendency to ignore the large that involves people of all ages. "It's out there and it happens, but there's still a fear of talking about it," he says. "In cities like Manchester, with unemployment problems, there are no-alcohol venues where five thousand people under the age of sixteen are eccy'd off their heads every Saturday night." He has one child, Xavier, with his partner Melissa Lyne. [Citation | author=Staff writer | title=Smiles all round for McDermott and happy family |newspaper=The Daily Telegraph |date=2008-07-01 | accessdate=2008-08-16]

McDermott began in 1985, which he says equipped him with useful experience and the ability to cope with most situations when he later started performing in clubs.

In 1994, Britain's offered the Doug Anthony All Stars their own television series, but Ferguson wanted to return to Australia for family reasons. However, McDermott and Fidler did not want to go back to Australia to appear on a commercial station as they believed this would be a compromise of what they did, and the group split up. In the two years following the break-up of the Doug Anthony All Stars, McDermott wrote two film scripts and the stage show "MOSH!". He says that he was not particularly interested in returning to comedy, which he came to regard as an "aberration, something that had been good to do for eight years but now it was over," until in 1996 he was recruited as host of the satirical news-based quiz show "Good News Week".

McDermott hosted "Good News Week" from 1996 until its cancellation in 2000, as well as its two spinoffs, "Good News Weekend" (1998) and "GNW Night Lite" (1999), and reprised this role when the series returned in 2008. A comedic quiz show with a similar format to that of the British program "", it features two teams comprised of two permanent captains and four guests, competing to answer questions based on recent news events. [cite web |author=Staff Writer | url=http://www.geocities.com/tangawarra/gnwart8.html | title=Yes, Prime Minister |work=Sunday Telegraph |date=2000-03-12 | accessdate=2008-07-25] McDermott opens each show with a humorous based on the news on the week and is responsible for posing questions and awarding points to teams. "I'm sort of judge, jury and executioner," he says of his role. [cite web |author=Staff writer | url=http://www.geocities.com/tangawarra/gnwart1.html | title=Review |work=Herald Sun |date=1996-04-10 | accessdate=2008-07-19] The show premiered on the ABC, but moved to Network Ten in 1999. [cite web |author=Fidgeon, Robert | url=http://www.geocities.com/tangawarra/gnwart9.html | title=Ten's Good News |work=Herald Sun |date=1999-01-27 | accessdate=2008-07-25]

The ABC was initially apprehensive about Robinson's choice of McDermott as host. He had at the time, and was best known for the crude, aggressive "bad boy" character he had played in the Doug Anthony All Stars, which many tended to confuse with his actual personality. In addition, it was doubted that he was capable of bing and speaking well, as in past interviews he had usually allowed his fellow band members to do most of the talking. McDermott cut off his dreadlocks for the show and succeeded in broadening his appeal by showing a gentler, more charming side as host. He has said that although he feels there are still elements of his more aggressive character in "Good News Week", they are "toned down... I've got to be the generous host now, spin-the-wheel sort of thing. I'm basing myself on Mike Brady now. I'm the disciplinarian." [cite web |author=Schembri, Jim | url=http://www.geocities.com/tangawarra/paulart12.html | title=Now For The News |work=The Age |date=1998-03-26 | accessdate=2008-07-19]

He would regularly sing on the program, particularly on "Good News Weekend" and "GNW Night Lite", including some of his own original songs. In one episode, McDermott performed the self-penned "Shut Up/Kiss Me" as a duet with . It was met with such a warm reception from viewers that it was eventually released as a single. [cite web |author=Scatena, Dino | url=http://www.geocities.com/tangawarra/paulart6.html | title=This Is Serious, Mac! |work=Daily Telegraph |date=1998-11-26 | accessdate=2008-07-19] Some of his other musical performances from the series are featured on the CD "Good News Week Tapes Volume 2", and many of his monologues from the start of the show appear on "Good News Week Tapes Volume 1". [cite web |author=Neilson, Mark | url=http://www.geocities.com/tangawarra/paulart8.html | title=Good News Good Music |work=Drum Media |date=2000-03-07 | accessdate=2008-07-19]

McDermott expressed his relief when the show was cancelled in 2000, saying that he could not have maintained the relentless production schedule for much longer. "I'm just so tired, I don't feel I have been human for five years," he said. [cite web |author=Staff writer | url=http://www.geocities.com/tangawarra/paulart14.html | title=The Fears, Dislikes and Dark Side Of A Funny Man |work=The Daily Telegraph |date=2000-10-22 | accessdate=2008-07-19] Network Ten had initially intended only to bring back "Good News Week" as a one-off special, but decided to expand it after the short supply of US shows resulting from the caused the network to take an interest in developing more local programs. The revived series premiered on February 11, 2008 with McDermott reprising his role as host. [cite web |author=Duck, Siobhan | url=http://www.news.com.au/perthnow/story/0,21598,23169714-5005382,00.html | title=TV Guide: Here's good news for Aussie production |work=News.com.au |date=2008-02-06 | accessdate=2008-07-19]

McDermott describes his performance style as "in your face and unapologetic, grotesque, offensive, loud. But it's all essentially me with the amp turned up—I don't own that many great acting skills."

He reappeared in the Melbourne International Comedy Festival from 2002 with Cameron Bruce and in a music-based comedy trio called GUD. [cite web | url=http://www.comedyfestival.com.au/cgi-bin/2002/programme/index.cgi?action=details&id=137 | title=accesscomedy.com.au presents, Paul McDermott 'GUD - Hard Core Cabaret' | archiveurl=http://web.archive.org/web/20020619084245/www.comedyfestival.com.au/cgi-bin/2002/programme/index.cgi?action=details&id=137 | archivedate=2002-06-19] The group uses topical humour in its music; their act includes songs about , the transportation of live animal stock and what they describe as contemporary Australian "folk heroes" such as , and convicted . [cite web |author=Scott-Norman, Fiona | url=http://www.theage.com.au/articles/2002/04/02/1017206201595.html | title=The quick and the dead |work=The Age |date=2002-04-03 | accessdate=2008-08-15] McDermott says that GUD is in a similar vein to the Doug Anthony All Stars in that it revolves around music, comedy and the inter-relationships between the band members onstage. [cite web |author=Leys, Nick | url=http://www.smh.com.au/articles/2004/04/22/1082530289812.html?from=storyrhs&oneclick=true | title=Gud on you, Paul |work=Sydney Morning Herald |date=2004-04-23 | accessdate=2008-08-15] According to McDermott, the group is named GUD in mockery of the way American people pronounce the word "god", "because that's who Americans thank at awards ceremonies, and I thought someone should be taking the credit." Their 2003 show, "GUD Ugh", won "" Critic's Choice Award for best show of the festival. [cite web | url=http://www.comedyfestival.com.au/awards2003.htm | title=Melbourne Comedy Festival: 2003 Barry Awards | archiveurl=http://web.archive.org/web/20031018052232/www.comedyfestival.com.au/awards2003.htm | archivedate=2003-10-18]

Between 1994 and 1996, McDermott wrote two film scripts and wrote, directed and performed in a stage show entitled "MOSH!". He describes the latter as being based on "my drug-addled observations when I've been abusing substances". "MOSH!" received a range of responses; it won the award for best fringe show at the Adelaide festival and was described by one reviewer as "often hilarious", but was savaged by other critics as being "gratuitously offensive".

In 2002, he appeared in the Australian theatre production of "The Witches of Eastwick" in the role of Darryl Van Horne. Despite having sworn he would never do a musical, McDermott says he was interested in the show because "it was still forming, still shaping. It's more challenging than doing a musical that's already in place." [cite web |author=Staff writer | url=http://mir.spaceports.com/~spoofy/articles17.htm#reluct | title=Reluctant frontman sells out for a song |work=The Australian |date=2002-05-14 | accessdate=2008-09-16] He has also had small acting roles in several Australian films, including that of the band manager in "The Night We Called It a Day" and Trevor in the TV miniseries "Through My Eyes: The Lindy Chamberlain Story". [cite web |author= | url=http://www.imdb.com/name/nm0567565/ | title=Paul McDermott (I) |work=IMDb |date= | accessdate=2008-09-16]