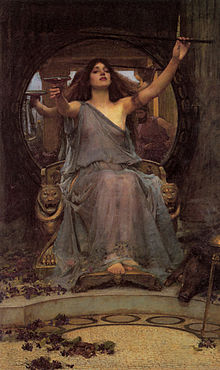 Circe Offering the Cup to Odysseus, by John William Waterhouse.

/ˈsɜrsiː/; Greek Κίρκη Kírkē "falcon") is a minor goddess of magic (or sometimes a nymph, witch, enchantress or sorceress), described in Homer's Odyssey as "The loveliest of all immortals", living on the island of Aeaea, famous for her part in the adventures of Odysseus.

By most accounts, Circe was the daughter of Helios, the god of the sun, and Perse, an Oceanid, and the sister of Aeetes, the keeper of the Golden Fleece, Perses, and Pasiphaë, the Wife of King Minos and mother of the Minotaur.[1] Other accounts make her the daughter of Hecate.[2]

Circe transformed her enemies, or those who offended her, into animals through the use of magical potions. She was known for her knowledge of drugs and herbs.

That Circe also purified the Argonauts for the death of Apsyrtus, as related in Argonautica,[3] may reflect early tradition.[4]

In Homer's Odyssey, Circe is described as living in a mansion that stands in the middle of a clearing in a dense wood. Around the house prowled strangely docile lions and wolves, the drugged victims of her magic;[5] they were not dangerous, and fawned on all newcomers. Circe worked at a huge loom.[6] She invited Odysseus' crew to a feast of familiar food, a pottage of cheese and meal, sweetened with honey and laced with wine, but also laced with one of her magical potions, and she turned them all into pigs with a wand after they gorged themselves on it. Only Eurylochus, suspecting treachery from the outset, escaped to warn Odysseus and the others who had stayed behind at the ships. Odysseus set out to rescue his men, but was intercepted by his great grandfather, Hermes,[7] who had been sent by Athena. Hermes told Odysseus to use the holy herb moly to protect himself from Circe's potion and, having resisted it, to draw his sword and act as if he were to attack Circe. From there, Circe would ask him to bed, but Hermes advised caution, for even there the goddess would be treacherous. She would take his manhood unless he had her swear by the names of the gods that she would not.

Odysseus followed Hermes's advice, freeing his men. Odysseus and his men remained on the island for one year feasting and drinking wine. According to Homer, Circe suggested to Odysseus two alternative routes to return to Ithaca: toward the "Wandering Rocks" where King Aeolus reigned or passing between the dangerous Scylla and the whirlpool Charybdis, conventionally identified with the Strait of Messina. She also advised Odysseus to go to the Underworld and gave him directions.[8]

This adventure, like the story of the Cyclops, is a fairy tale of wide dispersion. In 1869 G.K.C. Gerland[9] showed that the story makes part of the collection of Somadeva, Kathāsaritsāgara, a store of Indian tales, of which 1200 AD is the approximate date. Circe appears as a Yackshini, and is conquered when an adventurer seizes her flute whose magic music turns men into beasts. The Indian Circe had the habit of eating the animals into which she transformed men.[10]

Towards the end of Hesiod's Theogony (1011f) we find that Circe bore of Odysseus three sons: Ardeas or Agrius (otherwise unknown), Latinus, and Telegonus who ruled over the Tyrsenoi, that is the Etruscans.

Later poets generally only speak of Telegonus as Odysseus' son by Circe. When grown to manhood, later poets reported, she sent him to find Odysseus, who had long since returned to his home on Ithaca, but on arrival Telegonus accidentally killed his father. He brought the body back to Aeaea and took Odysseus' widow Penelope and son Telemachus with him. Circe made them immortal and married Telemachus, while Telegonus made Penelope his wife.

According to Lycophron's Alexandra (808) and John Tzetzes' scholia on the poem (795 - 808), Circe used magical herbs to bring Odysseus back to life after he had been killed by Telegonus. Odysseus then married Telemachus to Circe's daughter Cassiphone. Some time later, Telemachus had a quarrel with his mother-in-law and killed her; Cassiphone then killed Telemachus to avenge her mother's death. On hearing of this, Odysseus died of grief.

Dionysius of Halicarnassus (1.72.5) cites Xenagoras the historian as claiming that Odysseus and Circe had three sons: Romus, Anteias, and Ardeias who respectively founded three cities called by their names: Rome, Antium, and Ardea.

In later tales Circe turned Picus into a woodpecker for refusing her love, and Scylla into a monstrous creature with six dogs' heads when Glaucus (another object of Circe's affection) declared his undying love for her. She had one daughter: Aega, who was born from the ocean in a shield of ice.

Circe is referred to in Dante's Divine Comedy: "Virtue is like an enemy avoided by all, as is a serpent, through misfortune of place, or through bad habit that impels them, on which account they have so transformed their nature, the dwellers in the miserable valley, that it seems that Circe had them in her pasture."[11]

Shakespeare makes a reference to Circe in The Comedy of Errors. When the Duke is listening to seemingly contradictory tales that arose due to confusion between identical twins, he says:

"Why what an intricate impeach is this!
I think you all have drunk of Circe's cup.
If here you housed him, here he would have been;"[12]

Calderon de la Barca composed a mythological spectacle play based on Ulysses entrapment in Circe's island. Love, the Greatest Enchantment was performed at Philip IV's palace of the Buen Retiro in 1635.

In Ernest Hemingway's The Sun Also Rises, Lady Brett Ashley is compared to Circe by one of the men she seduces. "He calls her Circe," Mike said. "He claims she turns men into swine."

Although some scenes from the Odyssey remained favorites of the vase-painters, notably the visually dramatic episode of Polyphemus, the Circe episode was rarely depicted. In describing an unusual miniature fifth-century Greek bronze in the Walters Art Museum, Baltimore,[13] that takes the form of a man on all fours with the foreparts of a pig, Dorothy Kent Hill expressed the artist's dilemma: how could an artist depict a man bewitched into a pig other than as a man with a pig's head? "An author can discuss the mind and the voice, but an artist cannot show them."[14] In an Etruscan bronze mirror relief, a common barnyard pig is depicted at the feet of Circe: Odysseus and Elpenor approach her, swords drawn. The subject would be obscure, save that the names of the characters are inscribed in the bronze.[15] Some Boeotian vase-paintings show a caricature version of the episode, acted out by dwarf pygmies with negroid attributes, and an aged and lame Odysseus leaning on a staff; they are the mute survivors of some rustic comedy tradition that is impenetrable to us. The vase collection of the National Archaeological Museum in Athens, Greece holds a 5th century BC lekythos with a depiction of this episode described as "Odysseus' companions turned into swine"[16] 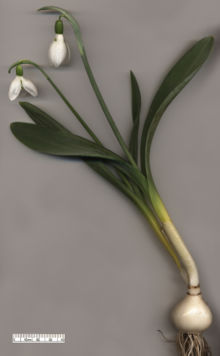 Medical historians have speculated that the transformation to pigs was not intended literally but refers to anticholinergic intoxication.[17] Symptoms include amnesia, hallucinations, and delusions. The description of "moly" fits the snowdrop, a flower of the region that contains galantamine, which is an anticholinesterase and can therefore counteract anticholinergics.

The phrase "Circean poison" has been used to refer to intoxicating things, such as applause.[18]

The "Circe effect", coined by the enzymologist William P. Jencks, refers to a scenario where an enzyme lures its substrate towards it through electrostatic forces exhibited by the enzyme molecule before transforming it into product. Where this takes place, the catalytic velocity (rate of reaction) of the enzyme may be significantly faster than that of others.[19]

In the 1960s television series Thriller, the episode titled "The Remarkable Mrs. Hawk" concerns a woman named "Cissy Hawk" who keeps blue ribbon hogs, while at the same time men around her magically disappear. A local sheriff by the name of "Ulysses" begins to suspect that Cissy may be far older than she appears.[20]

This article incorporates text from the public domain 1907 edition of The Nuttall Encyclopædia.