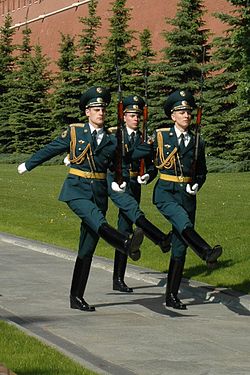 Changing the Guard at the Tomb of the Unknown Soldier in Alexander Garden, Moscow

Guard Mounting, or Changing the Guard (often incorrectly referred to as the Changing of the Guard), refers to a formal ceremony in which sentries providing ceremonial guard duties at important institutions are relieved by a new batch of sentries. The ceremonies are often elaborate and precisely choreographed. 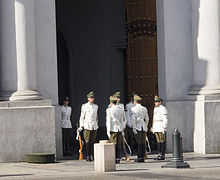 Changing the Guard at La Moneda.

The changing the guard ceremony is conducted every odd-numbered day, including Sundays, at La Moneda Palace in Santiago, Chile. A pair of mounted units lead a military band and the replacement unit to the plaza in front of La Moneda where the departing unit meets them. Between a number of patriotic and popular hymns, a color guard emerges as well as salutes between the honor guard at the main gate and the officers of each unit. 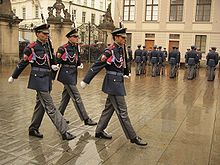 Changing the Guard at Prague Castle

Every day at noon the guard at Prague Castle (seat of the President of the Czech Republic) is changed.

Changing the Guard ceremony in Copenhagen

At Amalienborg Palace, the royal residence in Copenhagen, the Royal Guard, mounted by the Kongelige Livgarde is on duty for 24 hours, and the relief takes place every day at 12 o'clock noon. The parade starts off from the barracks by Rosenborg Castle.

There are three types of guard changes:

Changing the Guard in front of the Tomb of the Unknown Soldier, in Athens

In the state capital, Athens, members of the elite Evzones light infantry unit, provide a 24-hour honor guard, with an hourly guard change, at the Presidential Mansion and at the Tomb of the Unknown Soldier, off Syntagma Square at the foot of the Hellenic Parliament. The Changing the Guard at the Tomb of the Unknown Soldier in particular has become a tourist attraction, with many people marvelling at the guards, who stand motionless for two 20-minute intervals, during their 1 hour shifts.

A ceremonial change of guard is held at the President of India's official place of residence The Rashtrapati Bhavan. The Changing the Guard is generally held every Saturday at 08.00 am (Summer), 10.00am (Winter). The old and new guard consists of a troop from the President's Body Guard (PBG) and another platoon from one of the numerous regiments of the Indian Army. A military band also would be present as an accompaniment.

When the New Guard is formed up between the Dominion columns of North Block sentries are nominated and the respective guards are inspected by their officers as the band plays 'Sammaan Guard' (The Honour Guard). Men of the President's Bodyguard consists of the old warrior classes of the Rajputs, Sikhs and the Jats. Recruitment standards are strict and the minimum height is six feet.

After the inspection is over, a formal march commences with the band playing "Sher-E-Jawan" (Tiger of a soldier), into the Forecourt of the Rashtrapati Bhavan. The New Guard forms up along with the Old Guard and awaits the formal salutation of "Salami Shastra" (Present Arms) by the latter to the former to formally salute it and signify readiness for change over. Accompanied by the tune "Robinson" handing over of key takes place the Junior Commissioned Officer of the Old and New Guard patrol, symbolizing responsibility of commanders during changeover.

The Changing the Guard takes place in front of the Istana Negara, Kuala Lumpur daily at 12 o'clock. 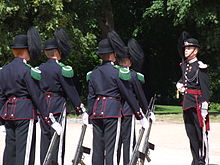 Changing the Guard, at The Royal Palace, Oslo

In the state capitol, Oslo, His Majesty the King's Guard keeps The Royal Palace and the Royal Family guarded for 24 hours a day. Every day at 1330 hrs, there is a Change of Guards outside the Palace, and the ceremony itself, which consists of two parts, lasts for approximately 40 minutes. Otherwise, the guards work in shift of two hours. The Guards are also stationed at Akershus Fortress, where the Change of Guards also happens at 1330 hrs. They are also guarding the residence of the Crown Prince and Crown Princess, and their own camp, Gardeleiren, outside Oslo. The two latter duties are considered "green watches", where the guards wear battle uniform, an olive and green uniform featuring a short jacket, shirt and tie and the guard's unique forage cap. The famous parade uniform dating from 1860, which consists of a wide brimmed hat with black plume, dark blue tunic and trousers with white stripes, is worn on the more prestigious palace and fortress watches. Usually, during the summertime, there are Guard Parades, where the New Guard marches from Akershus Fortress accompanied by a band, through Oslo's parade street, Karl Johan’s Gate.

His Majesty the King's Guard is organized as a battalion, with a Lieutenant Colonel as chief. The battalion has 6 companies. Each company consists of approximately 200 guards, and has its own field of specialization.

His Majesty the King's Guard consists of people who are serving their compulsory military service, but also women who volunteer to join the Guards. The Guards are one of the Norwegian Army's best trained units; this means they operate with the normal "green" service, where they train for worst case scenarios.

The National Republican Guard (GNR) carries out a Changing the Guard ceremony at the Belém Palace, official residence of the Portuguese President, on the third Sunday of each month at 11:00 am. The ceremony includes a performance by the cavalry musicians of the GNR's "Charanga a Cavalo", which claims to be the only mounted band in the world which performs at the gallop. 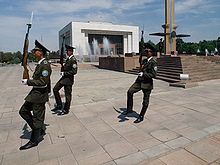 In the Republic of China (Taiwan), the change of guard ceremony is conducted at three locations in Taipei, namely the National Chiang Kai-shek Memorial Hall, the Sun Yat-sen Memorial Hall, and the National Martyrs' Shrine, where the ceremonial guards are rotated by the hour during the opening hours of the three memorials.

The Guardia di Rocca conduct a Changing the Guard ceremony at the Palazzo Pubblico (San Marino) from April to September every half hour from 8:30am to 6:30pm.[2] 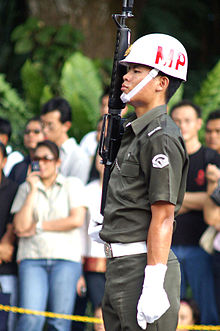 A member of the Singapore Armed Forces Military Police Command executing his precision drill routine at the Changing the Guard parade outside the Istana, Singapore.

In Singapore, the ceremony is performed at the main entrance of the Istana, the official residence of the President of Singapore. Held on the first Sunday of each month, the ceremony begins just behind The Heeren, a shopping mall at Orchard Road, where military policemen from the Silent Precision Drill Squad of the Singapore Armed Forces Military Police Command (SAFMPC) leads the contingent of new guards (also from the SAFMPC) in a march down the road towards the Istana, with the Singapore Armed Forces Bands providing music and beats.

Upon arrival at the gates of the Istana, the actual change of guard ceremony takes place, after which the SPDS performs their precision drill routines with the accompaniment of music provided by the band. The old guard then marches off together with the band to Handy Road, where the entire procedure ends.

The COG was first performed by men from the Singapore Armed Forces Guards Unit before the responsibility was handed over to the SAFMPC on 4 May 1980. The Silent Precision Drill Squad was added to the ceremony in 1987. 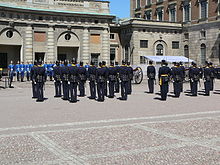 The Changing the Guard at Stockholm Palace (Swedish: Kungliga Slottet), the official residence of the King and Queen of Sweden, occurs daily in its Outer courtyard.

A Changing the Guard takes place at Anıtkabir in Ankara. Anıtkabir contains the tomb of Mustafa Kamal Atatürk, the founder of modern Turkey.

The Changing the Guard at Arlington National Cemetery in Arlington, VA.

A permanent guard is mounted at the Tomb of the Unknown Soldier at Arlington National Cemetery in Arlington, VA, near Washington, DC. This is performed by a single member of the 3rd U.S. Infantry Regiment, who marches along a 63-foot walkway in exactly 21 paces, before turning to face the tomb for exactly 21 seconds, turning to face the opposite direction for another 21 seconds, and then retracing his steps to repeat the process. Each turn the guard makes is precise and is instantly followed by a loud click of the heels as he snaps them together. The guard is changed every half hour during daylight in the summer, and every hour during daylight in the winter and every two hours at night (when the cemetery is closed to the public), regardless of weather conditions.