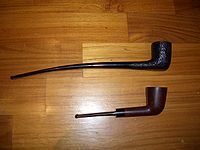 A churchwarden pipe is a tobacco pipe with a long stem. Some churchwarden pipes can be as long as 16 inches (40 cm). Churchwarden pipes are well known for their similar appearance to the pipes used in the The Lord of the Rings books and films. In German the style is referred to as "Lesepfeife" or "reading pipe," presumably because the longer stem allowed an unimpeded view of one's book.

Such pipes were very popular as an Oriental influence from the 17th century onwards in Europe. They remained most popular in Eastern Europe, as an emblem of the "Hussars", cavalry troops with roots in the Austro-Hungarian Empire, who went from Russia to France and England during the Napoleonic Wars and brought the pipes with them. It was even known as the "Hussar pipe" at the time. Historical engravings are full of men who loved having their portraits made while enjoying such a smoking instrument. This long stem pipe type has its origins in the Ottoman Empire, geographically and historically.

Churchwarden pipes generally produce a cooler smoke due to the distance smoke must travel from the bowl to the mouthpiece. They have the added benefit of keeping the users face further away from the heat and smoke produced by combustion in the bowl. They are also more prone to breakage since more pressure is placed on the tenon when the pipe is supported around the mouthpiece. Long ago, churchwarden pipes made of clay and were common in taverns, and sometimes a set of pipes would have been owned by the establishment and used by different clients like other service items (plates, tankards, etc.).