Pixinguinha (1897-1973) is one of the most important choro composers of all time. 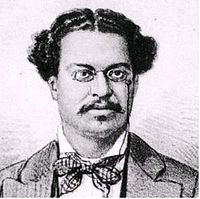 Joaquim Callado (1848-1880) is considered one of the creators of the choro genre of music.

Choro (Portuguese pronunciation: [ˈʃoɾu], "cry" or "lament"), traditionally called chorinho ("little cry" or "little lament"), is a Brazilian popular music instrumental style. Its origins are in 19th century Rio de Janeiro. In spite of the name, the style often has a fast and happy rhythm, characterized by virtuosity, improvisation, subtile modulations and full of syncopation and counterpoint. Choro is considered the first urban popular music typical of Brazil.

Originally choro was played by a trio of flute, guitar and cavaquinho (a small chordophone with four strings). Other instruments commonly played in choro are the mandolin, clarinet, saxophone, trumpet and trombone. These melody instruments are backed by a rhythm section composed of guitar, 7-string guitar (playing bass lines) and light percussion, such as a pandeiro. The cavaquinho appears sometimes as a melody instrument, other times as part of the rhythm.

Structurally, a choro composition usually has three parts, played in a rondo form: AABBACCA, with each section typically in a different key (usually the tonal sequence is: principal key->relative mode->sub-dominant key[1]). There are a variety of choros in both major and minor keys.

In the 19th century, choro resulted from the style of playing several musical genres (polka, schottische, waltz, mazurka and habanera) by carioca musicians, who were already strongly influenced by African rhythms, principally the lundu and the batuque. The term “choro” was used informally at first to refer to the style of playing, or a particular instrumental ensemble, (e.g. in the 1870s flutist Joaquim Antônio da Silva Callado formed an ensemble called "Choro Carioca", with flute, two guitars and cavaquinho),[2][3] and later the term referred to the music genre of these ensembles. The accompanying music of the Maxixe (dance) (also called "tango brasileiro") was played by these choro ensembles. Various genres were incorporated as subgenres of choro such as "choro-polca", "choro-lundu" "choro-xote" (from schottische), "choro-mazurca", "choro-valsa" (waltz), "choro-maxixe", "samba-choro", "choro baião".[4]

Just like ragtime in the United States, tango in Argentina and habanera in Cuba, choro springs up as a result of influences of musical styles and rhythms coming from Europe and Africa.

In the beginning (by the 1880s to 1920s), the success of choro came from informal groups of friends (principally workers of postal/telegraphic service and railway[5]) which played in parties, pubs (botecos), streets, home balls (forrobodós), and also the large success of musical scores of Ernesto Nazareth, Chiquinha Gonzaga and others pianists, published by print houses.[6] By the 1910s, many of the first Brazilian phonograph records are choros.

Much of the mainstream success (by the 1930s to 1940s) of this style of music came from the early days of radio, when bands performed live on the air. By the 1950s and 1960s it was replaced by urban samba in radio, but was still alive in amateur circles called "rodas de choro" (choro gatherings in residences and botecos), the one most famous was the "roda de choro" in the house of Jacob do Bandolim, in Jacarepaguá, and the "roda de choro" in the pub "suvaco de cobra" in the Penha.

In the late 1970s there was a successful effort to revitalize the genre in the mainstream, through TV-sponsored nation-wide festivals in 1977 and 1978, which attracted a new, younger generation of professional musicians. Thanks in great part to these efforts, choro music remains strong in Brazil. More recently, choro has attracted the attention of musicians in the United States, such as Mike Marshall and Maurita Murphy Mead, who have brought this kind of music to a new audience.

Most Brazilian classical composers recognize the sophistication of choro and its major importance in Brazilian instrumental music. Radamés Gnattali said it was the most sophisticated instrumental popular music in the world. Heitor Villa-Lobos defined choro as the true incarnation of Brazilian soul. Notably, both composers had some of their music inspired by choro, bringing it to the classical tradition.[7] The French composer Darius Milhaud was enchanted by choro when he lived in Brazil (in 1917) and he composed the ballet Le Boeuf sur le toit, in which he quotes close to 30 Brazilian tunes.[8]

According to Aquiles Rique Reis (a Brazilian singer), ”Choro is classical music played with bare feet and callus on the hands”[9]