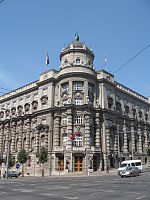 Officially the Government of the Republic of Serbia (Serbian: Влада Републике Србије / Vlada Republike Srbije) is the executive branch of government in Serbia.

The current government was elected on 7 July 2008 by the majority vote in the National Assembly of Serbia and restructured on 14 March 2011.[1] The cabinet, assembled by the prime minister designate Mirko Cvetković, was supported by the coalition For a European Serbia (DS, G17+, SPO, LSV, SDPS), coalition SPS/PUPS/JS and minority parties SVM, BDSS and SLPS. Opposition parties are SRS, DSS, NS, SNS, PzDD and LDP.