The PIT maneuver is a method by which one car pursuing another can force the pursued vehicle to abruptly turn sideways to the direction of travel, causing the driver to lose control and stop. The backronym "PIT" has a number of different meanings, depending on the agency using it or school teaching it. The most common meanings are Precision Immobilization Technique, Pursuit Immobilization Technique, Pursuit Intervention Technique, Push It Tough, Parallel Immobilization Technique, and Precision Intervention Tactic. In each case, the meaning is clear, no matter how the acronym is explained. Other names for the same maneuver are Tactical Vehicle Intervention (TVI), tactical ramming, legal intervention, and fishtailing. This technique is typically used by law enforcement officers as a safer alternative with which to bring car chases to conclusion. Other methods of terminating a pursuit include TPAC and the use of Spikes (also known by various trade names such as Stop Sticks or Stinger). A PIT maneuver is not effective against medium and heavy trucks and will instead cause serious damage to the police car/SUV attempting it.

The PIT was originally popularized in the 1970s by BSR Incorporated, an advanced driver training school in Summit Point, West Virginia.[citation needed] Tom Milner, a BSR co-owner at the time, brought the technique from Germany, where it was in use by the German Police. The technique was translated from a German book titled The Hunter and the Hunted.[citation needed] PIT gained popularity during the 1990s, and the technique was refined so as to reduce the violent ramming called for by earlier variations. A variation was already in use by the U.S. Secret Service since 1965 for VIP protection during motorcades.[citation needed]

The PIT maneuver was adapted from Stock Car racing, where drivers would bump a competitor to take them out, giving rise to the term, "takeout". This maneuver is illegal in Stock Car racing because it is very dangerous. The high speed involved in auto racing makes it much easier for drivers to take out another car with a less substantial bump than at lower speeds. When employing the PIT maneuver, the speed of the two cars involved will determine how far the car will travel once it is bumped. Partially for this reason, the higher the speed, the more unpredictable and dangerous the PIT maneuver becomes. This is just one of the very important factors a Police Officer must consider before implementing the PIT maneuver. A Police Officer is trained to wait until conditions are right before attempting a PIT maneuver to avoid the use of deadly force. Speeds must be lower and the "landing site" for the bumped vehicle must be clear of danger.

The Bump & Run technique used in Auto Racing is strongly related to the Police PIT maneuver and may predate it.[citation needed]

The first US law enforcement agency to teach PIT as a technique to halt fleeing vehicles was the Fairfax County Police Department in Virginia ,[1] which modified the parameters for initiating and executing the technique for police use. Terry Pearson and Joseph McDowell were the first law enforcement officers to incorporate the technique into training. Terry Pearson named it the "Precision Immobilization Technique" or P.I.T. Police departments throughout the United States including the San Bernardino County Sheriffs in California have come to believe that, when executed properly, PIT is an intermediate force option that can safely end a pursuit. Police vehicles often have reinforced bumpers to support this technique.

How to perform the PIT maneuver

The PIT begins when the pursuing vehicle pulls alongside the fleeing vehicle so that the portion of the pursuer's vehicle forward of the front wheels is aligned with the portion of the target vehicle behind the back wheels. The pursuer gently makes contact with the target's side, then steers sharply into the target. As soon as the fleeing vehicle's rear tires lose traction and start to skid, the pursuer brakes quickly while continuing to turn in the same direction until clear of the target. The target will turn in the opposite direction, in front of the pursuer, and will either spin out, or abruptly exit the roadway.

Typically, another police car will tail the PIT unit to proceed with the arrest, while the PIT unit recovers its own control and completely stops the car.

While steering into the skid (away from the pursuing vehicle) will reduce its effect, the fact that the pursuing car is continuing to push the rear of the target sideways virtually ensures loss of control of the targeted vehicle. By moving forward out of position, or by staying squarely in front of the PIT unit the lead vehicle can disallow the PIT unit from gaining proper positioning to conduct the maneuver. Alternatively, rapid deceleration will, of course, force the PIT unit to overshoot the required positionin. Advanced Defensive Driving Courses taught to VIP protection personnel would train drivers other advanced vehicle control techniques, such as using J-turns as a way of controlling the spinout resulting from a successful PIT maneuver being performed.[2] All this assumes that the road surface is in optimal condition; a wet road surface could make all attempts at recovery pointless.

The PIT is not applicable in every situation, and many factors affect the usefulness of the technique. Many of these factors relate to safety concerns: typical police policy recommends that an officer not to attempt the PIT at speeds greater than 35 miles per hour (55 kilometers per hour), and requires careful choice of location, considering all possible effects on other traffic and pedestrians. Because of the police department's potential liability for the injury or death of not only of the occupants of the target vehicle, but also bystanders, most departments limit its use to only the most high-risk scenarios. Most departments specify that the PIT should only be used to stop pursuits that are immediately dangerous and ongoing. When possible, a minimum of three pursuers should be present when a PIT is executed: one as the PIT vehicle and two following at a greater distance to react to the results.[citation needed]

The PIT is especially hazardous when the vehicles' bumpers are of significantly different heights, or against target vehicles with a high center of gravity such as vans or SUVs.

Some suggest that due to the utilization of electronic control systems on modern vehicles, the policies of using PIT maneuvers might need some more consideration. [3]

The PIT maneuver is not permitted during police pursuits in the United Kingdom. 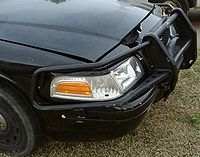 Damage from a PIT maneuver on a Crown Victoria

Tactical Pursuit And Containment (TPAC) is a term used by police in the United Kingdom, and describes training for managing and terminating police pursuits. TPAC embodies several methods of stopping fleeing vehicles, including rolling roadblocks, use of Stinger spike strips, and the "box and stop" containment method. TPAC is most effective on separated carriageways (such as motorways) where the path of the suspect is limited. It is not suited to roads with frequent intersections, those with two-way traffic on a single carriageway, or highways where the suspect may escape by means of a U-turn across the median strip.

Once a fleeing driver is contained on a motorway, a rolling block is initiated ahead of the pursuit. When the pursuit reaches the slowed traffic, the suspect can either attempt to pass the traffic or stay behind it. If the suspect chooses to stay behind the traffic, communication between the pursuing vehicles and the blocking vehicle(s) will lead to the block coming to a standstill, and the vehicle is surrounded and occupants detained. If the fleeing driver chooses to pass the traffic, usually on the hard shoulder, the pursuing vehicles follow it. Once past the traffic, the police vehicles can box in the suspect's vehicle and bring it to a controlled stop through coordinated braking, utilizing the sterile area in front of the blocking vehicle(s) to do so without endangering other road users.

In the UK, TPAC is specialist training given to advanced police drivers. As with the PIT technique, consideration has to be given to the size, weight and center of gravity of the fleeing vehicle. The most commonly used UK police vehicle for TPAC (as of 2007) seems to be the Volvo T-5 V70 Estate, which has found widespread acceptance throughout UK Police forces as a traffic policing vehicle.