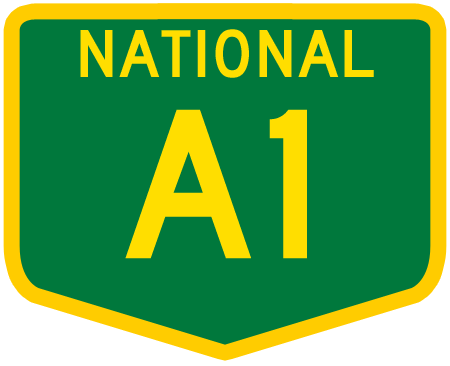 photo =
caption = Formerly
length = 1652
direction = North - South
start =
finish =
est =
through = Townsville, Mackay, Rockhampton, Maryborough
route = "Cairns - Cooroy:"
exits = "'The Bruce Highway is the major coastal highway of , . Running from the state capital, , to Cairns in , the route is a part of the Australian National Highway. The Bruce Highway is also part of Highway 1. Road length is approximately 1700 kilometres and is entirely sealed with .

The highway is named after the former Queensland and federal politician, Henry Adam Bruce. He was the state Minister for Works when the highway was named after him in the mid 1930s.

The Bruce Highway is the biggest traffic carrier in Queensland. The highway initially joined all the major coastal centres, however a number of bypasses, particularly in the south, have diverted traffic around these cities in order to expedite traffic flow and ease urban congestion. As a result, the highway is constantly being shortened. The road has from Brisbane to with some dual carriageway at .

In the south the Bruce Highway commences at the bridge over the Pine River at the Gateway Motorway interchange, 21 kilometres north of central business district. Recently, the Bruce Highway has changed its route numbering from National Highway 1 to the M1 (motorway road) or A1 (single carriageway generally with overtaking lanes).

Several major cities along the route include Maryborough, Rockhampton, Mackay, Townsville, Thuringowa and Cairns. The highway passes the , s and pastures in the Sunshine Coast; the Gunalda Range (north of ); Mount Larcom (north of Gladstone); the arid countryside north of Rockhampton and after that, passing through land predominantly used to , crop growing and s and the sub-tropics and s.

The Bruce Highway is set to undergo redevelopment, realignment, and extension of dual carriageway sections on numerous stretches of the Highway.Due to the nature of wet weather and tropical cyclone prone areas of North Queensland, The Bruce Highway is set to undergo realignment and floodproofing on a stretch of road between Cardwell and Tully. The current stretch is prone to frequent flooding in the wet season.

A new Bruce Highway route through Townsville is under construction with the first stage of the (now called The Ring Road) already completed. The next two stages are planned for construction by early 2007, and planned to be completed by mid-late 2009.

A stretch of the Highway to the north of Townsville has been given approval, and will see the existing dual carriageway to the north through Thuringowa city extended by another 5-10km. It will also include installation of Traffic lights at Mt Low Parkway, and will also see the final stage of the Ring Road link up to this section by 2015. The Queensland Main Roads Department's ultimate concept map of the development also shows that the highway will also progressively become Motorway standard by 2015, with the implementation of interchanges at various junctions.

The highway south of Cairns will also see sections of the highway to the suburb of Edmonton become six lanes, with progressive dual-carriageway redevlopment of the highway to Gordonvale. Labour candidate Jim Turnour has also put ahead that stage 1 of the Cairns Southern Motorway will begin with overpasses at Ray Jones Drive and Sheehy Road if elected.

Travelling north, the following towns and small cities are found on (or very close to) the Bruce Highway.
*Brisbane to Maryborough
**Nambour
**Gympie

Note: Exit number are based on approximate distance to QLD/NSW border