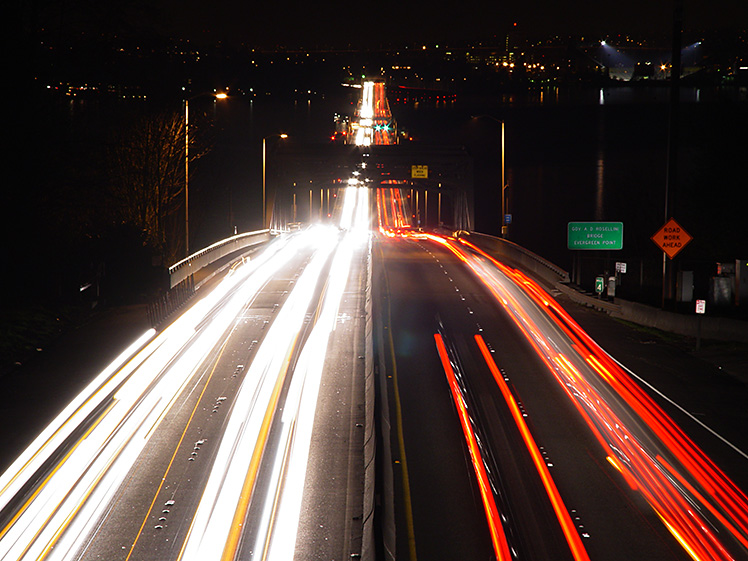 The Evergreen Point Floating Bridge, now officially the Governor Bridge—Evergreen Point, is the longest in the world at 7,578 feet (2,310 meters). It carries State Route 520 across from Seattle to Medina and is often called the "520 bridge" by locals. The of the bridge's original name is the westernmost of the three small peninsulas it crosses. (The other two are Hunts Point and Yarrow Point.) It was renamed for Governor Rosellini, who had advocated its construction, in 1988. [cite web|url=http://www.historylink.org/essays/output.cfm?file_id=690|title=HistoryLink.org - The Online Encyclopedia of Washington State History]

The bridge was built as a four-lane in to provide easy access from Seattle to Eastside communities such as Bellevue, Kirkland, and Redmond. It was the second bridge to cross Lake Washington, the first being the , built in 1940 as part of U.S. Route 10, later part of Interstate 90, which at its construction was the largest floating structure ever built. Tolls were lifted from the Evergreen Point Bridge in , and the wide area where tolls were collected is now used for bus stops.

In 2000, a gravel barge (whose captain was dozing at the wheel) struck the bridge, closing it for eleven days and causing $500,000 worth of damage. In 1989, an electrical fault caused the drawspan to open during rush hour, causing one death and five injuries.

Today the bridge is near the end of its useful life, according to the state Department of Transportation. The bridge must be closed in high winds, and even after a seismic retrofit in , it is at risk of collapse in an earthquake. Due to the weight of various reinforcements over the years, the bridge currently rides about a foot lower in the water than it did originally. The DOT is working on replacing the aging bridge with a new span of six lanes.

The bridge is anchored by a large number of high-strength cables. According to an interview conducted by local newspapers, a severe storm during the bridge's lifespan came within strands of breaking some of these cables, which would have resulted in the catastrophic collapse of the bridge. Since then, additional cables have been added, and much of the bridge has been replaced with lighter materials, but the danger remains. The bridge was originally designed to stand up to a 100-year storm, but the assumptions used actually reflected what is now considered to be a 20-year storm for the Seattle area.

Scenery visible westbound on clear days include the and on the campus, as well as two metal sculptures. Eastbound are expensive waterfront homes in Medina, including the large home of on the southern side, which is extensively lit in the holiday season. On clear days, is visible to the north, the are the backdrop, and is to the southeast. is to the south. On July 4, fireworks are visible from many communities and homes along the lake.

The bridge incorporates an infrequently-used drawspan to allow large vessels to pass. Smaller vessels pass under the "high rises," elevated portions of the bridge on each end. The drawspan is also opened during major storms to relieve water pressure.