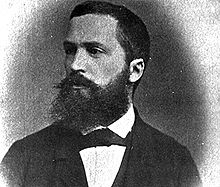 Finsch was born at Warmbrunn in Silesia to Mortiz Finsch and Mathilde née Leder. His father was in the glass trade and he too trained as a glass painter. An interest in birds led him to use his artistic skills for the purpose and an offer from the Austrian Consul led him to visit Bulgaria in 1859. Here he produced a work on the regional birdlife and published his first paper in the Journal fur Ornithologie on the birds of Bulgaria. This experience helped him obtain a curator position at the Reichsmuseum of Natural History in Leiden (1862–1865). In 1864 he became curator of the museum in Bremen and became the director in 1876. He obtained an honorary doctorate from the University of Bonn in 1868 for ornithology but he also took an interest in ethnology. In 1876 he accompanied the zoologist Alfred Brehm on an expedition to Turkestan and northwest China. He also became interested in the creation of German colonies in the Pacific and he became a member of the South Sea Plotters, an influential group led by a banker named von Hansemann.[1] 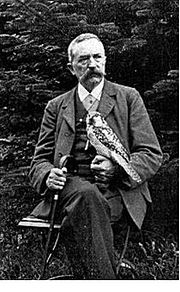 Finsch resigned as curator of the museum in 1878 in order that he could resume his travels. In 1886 he married Elisabeth Hoffman. Between spring 1879 and 1885 he made several visits to Polynesian Islands, New Zealand, Australia and New Guinea.[1] He returned to Germany in 1882.[2] In 1884 he returned to New Guinea as Bismarck's Imperial Commissioner and negotiated for the north-eastern portion of that island, together with New Britain and New Ireland, to become a German protectorate. It was renamed Kaiser Wilhelm's Land and the Bismarck Archipelago. The capital of the colony was named Finschhafen in his honour. In 1885 he was the first European to discover the Sepik river, and he named it after Kaiserin Augusta, the German Empress.

After returning to Berlin Finsch spent two years as advisor to the Neuguinea-Kompagnie. In 1898 he became curator of the bird collections at the Rijksmuseum in Leiden, and then in 1904 head of the ethnographical department of the Municipal Museum in Brunswick, where he died.

One of his major works was on the parrots of the world. This was not without its critics, since he often tried to rename genera and apparently so as to obtain authorship.[3]

Some species of parrot bear his name, including the Lilac-crowned Parrot Amazona finschi and the Grey-headed Parakeet Psittacula finschii. The monitor lizard Varanus finschi is named after him, as he collected what would become the holotype for this species. The crater Finsch on the Moon is also named in his honor.