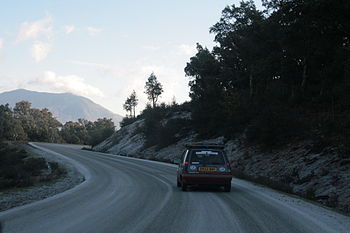 Black ice on a road.

The phenomenon of freezing point depression is used in technical applications to avoid freezing. In the case of water, ethylene glycol or other forms of antifreeze is added to cooling water in internal combustion engines, making the mixture stay a liquid at temperatures below its normal freezing point. This phenomenon is effective in quickly lowering the temperature of a beverage placed in an ice bath containing salt; it is commonly used to make ice cream or cool beers rapidly. Road salting is the most widespread application, helping to melt ice and snow on the highway. It is especially useful in removing black ice, which is a hidden but lethal danger to drivers. The maximum depression of the freezing point is about 0°F (-18°C), so if the ambient temperature is lower, salt or sodium chloride will be ineffective.

The use of freezing-point depression through "freeze avoidance" has also evolved in some animals that live in very cold environments. This happens through permanently high concentration of physiologically rather inert substances such as sorbitol or glycerol to increase the molality of fluids in cells and tissues, and thereby decrease the freezing point. Examples include some species of arctic-living fish, such as rainbow smelt, which need to be able to survive in freezing temperatures for a long time. In other animals, such as the spring peeper frog (Pseudacris crucifer), the molality is increased temporarily as a reaction to cold temperatures. In the case of the peeper frog, this happens by massive breakdown of glycogen in the frog's liver and subsequent release of massive amounts of glucose.[1]

With the formula below, freezing-point depression can be used to measure the degree of dissociation or the molar mass of the solute. This kind of measurement is called cryoscopy (Greek "freeze-viewing") and relies on exact measurement of the freezing point. The degree of dissociation is measured by determining the van 't Hoff factor i by first determining mB and then comparing it to msolute. In this case, the molar mass of the solute must be known. The molar mass of a solute is determined by comparing mB with the amount of solute dissolved. In this case, i must be known, and the procedure is primarily useful for organic compounds using a nonpolar solvent. Cryoscopy is no longer as common a measurement method as it once was. As an example, it was still taught as a useful analytic procedure in Cohen's Practical Organic Chemistry of 1910,[2] in which the molar mass of naphthalene is determined in a so-called Beckmann freezing apparatus.

Freezing-point depression can also be used as a purity analysis tool when analysed by differential scanning calorimetry.[3] The results obtained are in mol%, but the method has its place, where other methods of analysis fail.

This is also the same principle acting in the melting-point depression observed when the melting point of an impure solid mixture is measured with a melting point apparatus, since melting and freezing points both refer to the liquid-solid phase transition (albeit in different directions).

Freezing-point depression of a solute vs a solvent

We consider the problem in which the solvent freezes to a very nearly pure crystal, regardless of the presence of the solute. This typically occurs simply because the solute molecules do not fit well in the crystal, i.e. substituting a solute for a solvent molecule in the crystal has high enthalpy.

The explanation for the freezing point depression is then simply that as solvent molecules leave the liquid and join the solid they leave behind a smaller volume of liquid in which the solute particles can roam. The resulting reduced entropy of the solute particles thus is independent of their properties. This approximation ceases to hold when the concentration becomes large enough for solute-solute interactions to become important. In that regime, the freezing point depression depends on particular properties of the solute other than its concentration.

If the solution is treated as an ideal solution, the extent of freezing point depression depends only on the solute concentration that can be estimated by a simple linear relationship with the cryoscopic constant:

This simple relation doesn't include the nature of the solute, so this is only effective in a diluted solution. For a more accurate calculation at a higher concentration, Ge and Wang (2010)[5] [6] proposed a new equation:

In the above equation, TF is the normal freezing point of the pure solvent (0oC for water for example);aliq is the activity of the solution (water activity for aqueous solution); ΔHfusTF is the enthalpy change of fusion of the pure solvent at TF, which is 333.6 J/g for water at 0oC; ΔCfusp is the differences of heat capacity between the liquid and solid phases at TF, which is 2.11 J/g/K for water.

The solvent activity can be calculated from Pitzer model or modified TCPC model, which typically requires 3 adjustable parameters. For the TCPC model, these parameters are available at reference [7] [8] [9] [10] for many single salts.