The crown-of-thorns starfish (Acanthaster planci) is a large nocturnal sea star that preys upon coral polyps. The crown-of-thorns receives its name from venomous thorn-like spines that cover its body. It is endemic to tropical coral reefs in the Red Sea, the Indian Ocean, and the Pacific Ocean. As solitary animals, they feed alone and maintain constant distance between themselves and other members of their species.

The crown-of-thorns is the second largest sea star in the world. Only the sunflower starfish is larger. 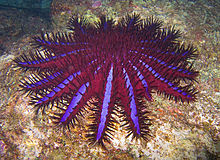 The crown-of-thorns starfish normally range in size from 25 to 35 cm.[1] The sharp spines on the sides of the starfish's limbs resemble thorns and create a crown-like shape, giving the creature its name. The thorns are very sharp and are capable of piercing through standard wetsuits and other clothing.[citation needed] They are also venomous. When the crown-of-thorns feed, they release a chemical which is known to attract more starfish to the area.It is also has very vibrant colours.

The crown-of-thorns produces a neurotoxin which can be released through its spines. Not only are the wounds themselves serious, but the neurotoxin can cause a sharp stinging pain that can last for hours, as well as nausea and vomiting.[citation needed] Frequently, the area around the wound turns a dark blue and begins to swell (edema), which may persist for weeks.[citation needed] The spine(s) themselves may break off and become embedded inside the skin. This can lead to infection, and increased toxicity.[citation needed]

The crown-of-thorns is a corallivore, a carnivorous predator that preys on reef coral polyps. They climb onto reef structures, and then extrude their stomach onto the coral. This releases digestive enzymes that allow the starfish to absorb nutrients from the liquefied coral tissue. The crown-of-thorns also preys on brittle stars in a similar fashion.[citation needed]

They are voracious predators. An individual starfish can consume up to 6 square metres (65 sq ft) of living coral reef per year.[2]

During times of food shortage the crown-of-thorns can survive on energy reserves for over six months.

Venomous, sharp spines cover nearly the entire surface of the crown-of-thorns. These natural defenses make it a very unattractive target for most other reef predators. In spite of this, the Giant Triton (a mollusc) and the harlequin shrimp attack and feed on crown-of-thorns starfish. Some large reef fish, particularly humphead wrasse, may also prey on the starfish.[3]

Sea star larvae are planktonic, so the major population control of the species comes from planktonic predation of junior species members.

In an interesting reversal, a large solitary coral polyp of the genus Pseudocorynactis has been observed attacking, and then wholly ingesting a crown-of-thorns starfish of similar size.[4]

Decline in predator populations (through overharvesting, habitat destruction) has also been offered as an explanation for increasing outbreaks of crown-of-thorns starfish. 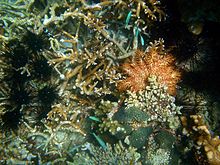 Crown-of-thorns amongst coral reef, off the coast of Madagascar

The crown-of-thorns starfish has gained notoriety as a threat to the coral reef ecosystem, particularly in the Great Barrier Reef off the coast of Australia. Overpopulation of crown-of-thorns has been blamed for widespread reef destruction. Birkeland (1985) describes the starfish as one of the most influential species in the diverse biotic communities that make up tropical coral reefs.

Some ecologists point out that the starfish has an important and active role in maintaining coral reef biodiversity, driving ecological succession. Before overpopulation became a significant issue, crown-of-thorns prevented fast-growing coral from overpowering the slower growing coral varieties.[5]

Other factors negatively affecting the reef ecosystem, such as coral bleaching or Black band disease, mean that outbreaks of the crown-of-thorns can now cause permanent and devastating damage. Increasing outbreaks are also thought to be caused by possible environmental pollution triggers. Algal blooms caused by agricultural run-off may supply predators of crown-of-thorn starfish larvae with plentiful alternative food sources. This seems the most logical explanation for the recent crown-of-thorns outbreak in the Tubbataha Reef, a UNESCO World Heritage Site.[6] These explanations may also explain why massive outbreaks seemingly appearing out of nowhere, with no previous indication of an increasing population at the affected site.[7]

The crown-of-thorns starfish may "promote transmission" of some coral diseases.[8] 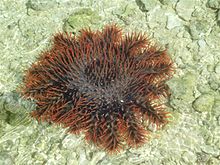 Population numbers for the crown-of-thorns have been increasing since the 1970s.[citation needed] However, historic records distribution patterns and numbers are hard to come by, as SCUBA technology, necessary to conduct population censuses, had only been developed in the previous few decades.

To prevent overpopulation of crown-of-thorns causing widespread destruction to coral reef habitats, humans have implemented a variety of control measures.

Injecting sodium bisulphate into the starfish is the most efficient measure in practice. Sodium bisulphate is deadly to crown-of-thorns, but it does not harm the surrounding reef and oceanic ecosystems.[9] To control areas of high infestations, teams of divers have had kill rates of up to 120 per hour per diver. [10] The practice of dismembering them was shown to have a kill rate of 12 per hour per diver and the diver performing this test was spiked 3 times. Therefore, it is for this reason and not rumors that they might be able to regenerate that dismembering is not recommended.

An even more labor intensive route, but less risky to the diver, is to bury them under rocks or debris. This route is only suitable for areas with low infestation and if materials are available to perform the procedure without damaging corals.

The crown-of-thorns sea star has generally been considered as a single widespread species: A. planci. However, results from DNA analyses published in September 2008 suggest that the crown-of-thorns starfish is actually constituted of four species (or subspecies – given that the genus Acanthaster is otherwise monotypic, treatment as allopatric species is preferrable), with distinct distributions in the Red Sea, Pacific, Northern and Southern Indian Oceans.[11]

Differences between these putative species in behaviour, diet, or habitat may be important for the design of appropriate reef conservation strategies.[12]