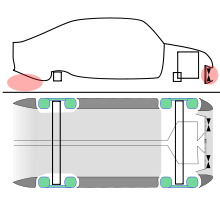 A diffuser, in an automotive context, is a shaped section of the car underbody which improves the car's aerodynamic properties by enhancing the transition between the high-velocity airflow underneath the car and the much slower freestream airflow of the ambient atmosphere. It works by providing a space for the underbody airflow to decelerate and expand (in area, density remains constant at the speeds that cars travel) so that it does not cause excessive flow separation and drag, by providing a degree of "wake infill". The diffuser itself accelerates the flow in front of it, which helps generate downforce.

When a diffuser is used, the air flows into the underbody from the front and sides of the car, accelerates and reduces pressure. There is a suction peak at the transition of the flat bottom and diffuser. The diffuser then eases this high velocity air back to normal velocity and also helps fill in the area behind the car making the whole underbody a more efficient downforce producing device by reducing drag on the car and increasing downforce. The diffuser also imparts upward momentum to the air which further increases downforce.

The aft part of a car underbody is where a diffuser is usually located. It works by accelerating the velocity of the airflow underneath the car. The pressure under the car is affected by the diffuser that it can expand back to ambient in the diffuser, as the car moves through the air. It uses Bernoulli's principle, such that the pressure decreases while the velocity increases. Since the pressure below the car is lower than on the side and above the car, downforce is produced if implemented correctly. The diffuser "drives" the underbody, which produces the downforce. Front diffusers also exist (especially on Le Mans Prototypes or similar cars), however they generate downforce purely from momentum exchange with the air, as there is nothing ahead of them to drive. A poorly designed front diffuser can create a low pressure region toward the front of the car which slows the air behind it down and reduces the effectiveness of the rest of the underbody. Front diffusers usually route air away from the car so that it doesn't effect the rest of the underbody. The air can be vented through a channel or expelled near the front wheels.

Injecting the exhaust into the rear diffuser can also help extract the air from below the car. The exhaust gasses effectively energize the boundary layer, helping to raise the pressure of the low-pressure, fast-moving airstream back to the ambient atmospheric pressure at the exit of the diffuser. This fast-moving air helps evacuate the diffuser more quickly, which helps drop the pressure at the underbody. However, this makes the diffuser rather sensitive to engine speed. When the driver lifts off the throttle, the exhaust flow is greatly reduced, which makes the diffuser less effective, robbing the vehicle of downforce. Thus, handling is negatively affected.

The car's bodywork also interacts with the flow through the diffuser. In addition to creating downforce, the front wing and nose try to keep clean air flowing around, and more importantly under, the car.[1] Clean air under the car prevents flow separation from occurring in the diffuser, which would severely rob its performance. The rear wing also affects the diffuser. When the wing is mounted low and close to the diffuser, the low pressure under the wing helps suck air through the diffuser. Cars, such as the Toyota Eagle MK. III and the Jaguar XJR-14 employed two-tier wings to enhance this effect. One profile was mounted high, in order to hit relatively clean air. The other profile was mounted almost flush with the bodywork behind the chassis. This wing's profile is used to drive the diffuser, creating that low pressure area to help move air from the underbody. According to Hiro Fujimori, aerodynamicist for the Toyota Eagle project, this bi-plane wing produced 18% more downforce for the same drag as a normal wing.[2] Conversely, equal downforce levels could be attained for significantly reduced drag with this "Red Baron" wing.

In 2009, the Formula 1 grid was embroiled in controversy. The culprit was the so-called "Double-Decker Diffuser" introduced at first by Brawn GP, WilliamsF1, and Toyota Racing, but later put into use by every team. These three teams had exploited a loophole in the rules that allowed for more volume in the diffuser. The rules stated that the diffuser must start at a point aligned with the centerline of the rear wheels. The loophole allowed for holes in the underbody, perpendicular to the reference plane (not visible as a hole when viewed from directly above), that fed a diffuser channel that was above the main diffuser. This greatly increased the available downforce, and was worth about half a second per lap, according to Mike Gascoyne.[3] The teams have decided to allow the double-decker diffusers for 2010. However, for 2011, the Formula 1 Technical Working Group has decided to ban multi-deck diffusers[4]

As the front of the car slows down the air without a diffuser, this is the ideal place for an inlet. A splitter is commonly used here, serving to increase the amount of downforce at the front of the car. The airstream is brought to stagnation above the splitter by an air dam, causing an area of high pressure. Below the splitter, the air is redirected away from the stagnation zone and is accelerated, causing the pressure to drop. This, combined with the high pressure over the splitter creates downforce. The larger the area of the splitter, the more downforce is generated. In most closed-wheel race cars, the underside of the splitter smoothly integrates with the undertray, creating one large flat plane that is driven by the rear diffuser. Some race cars, such as the Toyota GT-One actually use an additional diffuser immediately behind the splitter to help create more downforce.[5] The air extracted by this diffuser is exhausted through vents in the sidepods or above the car around the cockpit.

Examples of diffusers and splitters