Hoyt was born in Concord, New Hampshire. He had a difficult childhood, as his mother died when he was nine years old. He graduated at the Boston Latin School and, after being engaged in the cattle business in Colorado for a time, took up newspaper work, first with the St. Albans (Vt.) Advertiser, and later becoming musical and dramatic critic of the Boston Post.

Beginning in 1883, Hoyt turned playwright and wrote a series of twenty farcical comedies (roughly one per year until his death) and a comic opera. Hoyt's plays emphasized individualized characters drawn from the everyday experiences of ordinary people. His 10th play, A Trip to Chinatown (1892), with its hit tune "The Bowery", and his 1883 play, A Milk-White Flag, were the most successful. Hoyt had his own theater, the Madison Square Theater, where A Trip to Chinatown was performed 657 times. He was a highly popular playwright and producer, and was very financially successful, thanks in part to the assistance of his business partners, Charles W. Thomas and Frank McKee.

By a landslide, Hoyt was the 19th-century playwright who did the most to combine baseball with his love for the theater. Besides having covered Boston Beaneater baseball for the Boston Post, he was a member of the Boston Elks lodge, whose members included fellow theatrical-sports buff Nat Goodwin. In early 1888, Hoyt was responsible for the stage debut of Boston Elk-Boston Beaneater Mike "King" Kelly in his A Rag Baby, and for the first-ever star billing given to a ballplayer on the stage. The latter took place in 1895, with longtime Chicago diamond star Cap Anson drawing the distinction through his A Runaway Colt. 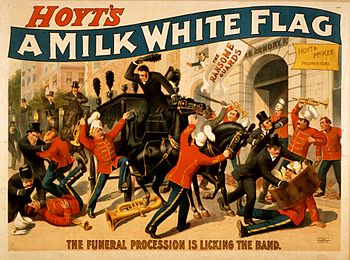 Hoyt was also responsible for two of Kelly and Anson's lesser roles: At the end of the 1888 season, he gave Anson a bit part one day in his A Bunch of Keys; Anson wore "old gray whiskers and an old man’s wig" and stalked forth and shouted, "Good marnin, me min; I want yez to git that hole complaited [completed] to-day." Those were all of his lines, and New York and Chicago players were present. Around Christmas that year, and then New Year’s Day of 1889 in New York, Kelly played a "tough baggage-smasher" in Hoyt’s A Tin Soldier. Kelly was dressed as a tramp, and some of his lines concerned a character named Rats. When someone said to him, "Do have that Rats licked. I’ll give $10 to have that Rats licked," Kelly replied, "Make it $15 and I’ll lick him." Later, when someone said, "Do it well and I’ll make it [$]25," Kelly replied, "Young feller, I’ll blot him off the earth."

Hoyt, once considered one of the most famous citizens of Charlestown, New Hampshire (before Carlton Fisk), was twice a member of the New Hampshire Legislature and was Democratic candidate for Speaker. 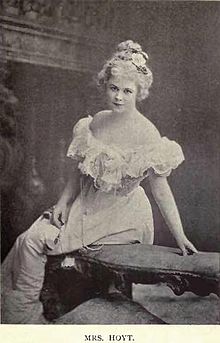 Both his first wife, actress Flora Walsh, and his second wife, actress Caroline Miskel, died after only a few years of marriage. The death of his second wife in 1898 led to Hoyt's being committed to an insane asylum in 1900. Although his stay was brief, he returned to his Charlestown, New Hampshire home and died four months later.