Ott was a six-time NL home run leader, in 1932, 1934, 1936–38, and 1942. From 1928-1945, he led the New York Giants in home runs. This 18-season consecutive dominance is a record; no other player has ever led their team in more consecutive years in a single Triple Crown category. He was both the youngest player to hit 100 home runs and the first National Leaguer to hit 500 home runs. He passed Rogers Hornsby to become the all-time NL home run leader in 1937 and held that title until Willie Mays passed him in 1966.

He used a batting style that was then considered unorthodox, lifting his forward (right) foot prior to impact. This style helped with his power hitting. More recent players who used a similar style include Harold Baines and Kirby Puckett, as well as the Japanese home run king, Sadaharu Oh.

In 1943, all of his 18 home runs came at home; only two others ever had a greater number of all-homefield home runs. Of Ott's 511 career home runs, 323 of them, or 63 percent, came at home. (Home Run Handbook, John Tattersall, 1975). Because of this, his home run record historically has been downplayed, suggesting that a 257-foot (78 m) foul line at the Polo Grounds resulted in higher numbers at home. As a balance, the Polo Grounds had the deepest power alleys in baseball. Also, he hit more career home runs in foreign stadiums than any other National League hitter at the time of his retirement.In some of his better seasons, he hit more homers on the road than in the Polo Grounds.

Though there may be reason to believe that he was a better hitter than his record holds due to differences in National League and American League ball specifications ("All too forgOtten" Steve Treder, October 2, 2007). Those differences are considered the most outstanding in the history of the game and made it considerably harder for National League hitters to achieve home runs.

During the prime of Ott's career, eleven seasons from 1931 through 1941, the American League home runs averaged 21% higher and peaked at 41% higher than the National League for every year of this period. Babe Ruth and Jimmie Foxx, contemporaries, and both American League players, were the only batters to surpass Ott's record during this time.

He hit two home runs during the 1933 series. In game 1, he had four hits, including a two-run home run in the first inning. In game 5, he drove in the series-winning run with two outs in the top of the 10th, driving a pitch into the center-field bleachers.

He managed the Giants for seven years between 1942 and 1948. The Giants best finish during that time was in third place in 1942. It was in reference to Ott's supposedly easy-going managing style that then-Dodgers manager Leo Durocher made the oft-quoted and somewhat out-of-context comment, "Nice guys finish last!"

He was selected to the Baseball Hall of Fame in 1951 with 87% of the vote. His number "4" was also retired by the Giants in 1949, and it is posted on the facade of the upper deck in the left field corner of AT&T Park.

He was a 12-time M.L. All-Star, from 1934 to 1945. He was also named four times to the Major League All-Star Teams of The Sporting News, in 1934-36 and in 1938. He is one of only six NL players to spend a 20+ year career with one team (Cap Anson, Stan Musial, Willie Stargell, Tony Gwynn, and Craig Biggio being the others). In 1999, he ranked number 42 on The Sporting News' list of the 100 Greatest Baseball Players, and he was a nominee for the Major League Baseball All-Century Team. 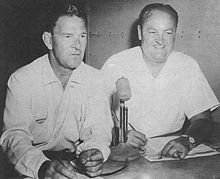 Mel Ott (left) in the broadcast booth with Van Patrick

After his playing career was over, Ott broadcast baseball on the Mutual radio network in 1955. From 1956 to 1958, Ott teamed with Van Patrick to broadcast the games of the Detroit Tigers on radio and television.

Ott died in an auto accident in New Orleans in 1958; he was interred in Metairie Cemetery. Ott died in a similar manner to two other N.Y. Giant Hall of Famers: Frankie Frisch in 1973 and Carl Hubbell in 1988 (the latter 30 years to the day of Ott's death). Ott is remembered in his hometown of Gretna, where a park is named in his honor. In the 1989 film Field of Dreams, Ott was one of several deceased players portrayed in farmer Ray Kinsella's Iowa cornfield. In 2006, Ott was featured on a U.S. postage stamp, as one of a block of four honoring "Baseball Sluggers" — the others being Mickey Mantle, Hank Greenberg, and Roy Campanella. In announcing the stamps, the U.S. Postal Service stated, "Remembered as powerful hitters who wowed fans with awesome and often record-breaking home runs, these four men were also versatile players who helped to lead their teams to victory and set impressive standards for subsequent generations".[2] Ott is also remembered in the name of the Little League of Amherst, New York. The Mel Ott Little League began in 1959, named for the recently deceased superstar.

Ott is mentioned in the poem "Line-Up for Yesterday" by Ogden Nash:

O is for Ott
Of the restless right foot.
When he leaned on the pellet,
The pellet stayed put.