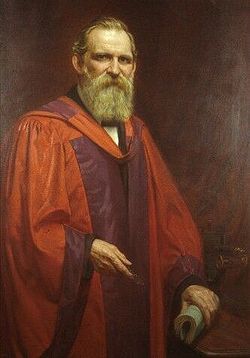 He was born at Faringdon in Berkshire (now Oxfordshire) and educated as a teacher at the Culham Diocesan Training College near Abingdon, Oxfordshire. He moved to the Scottish border region, where he investigated the previously little-known fossil fauna of the area. There in 1869 he married Janet, daughter of Galashiels schoolmaster Walter Sanderson and stayed in the area. Eventually, through patient mapping and innovative use of index fossil analysis, Lapworth showed that what was thought to be a thick sequence of Silurian rocks was in fact a much thinner series of rocks repeated by faulting and folding.

Charles Lapworth completed this pioneering research in the Southern Uplands while employed as a schoolmaster for 11 years at the Episcopal Church school, Galashiels. He then studied geology and became in 1875 an assistant at Madras College in St Andrews. Fife, and then in 1881 the first Professor of Geology at Mason's College, later the University of Birmingham, where he taught until his retirement.

He is best known for pioneering faunal analysis of Silurian beds by means of index fossils, especially graptolites, and his proposal (eventually adopted) that the beds between the Cambrian beds of north Wales and the Silurian beds of South Wales should be assigned to a new geological period: the Ordovician. This proposal resolved a long running controversy which began when Roderick Murchison and Adam Sedgwick argued over the relative ages of the strata in question. Lapworth received numerous awards for his research work, while for teaching he used the English Midlands as a setting for demonstrating the fieldwork techniques he had pioneered in his own research. 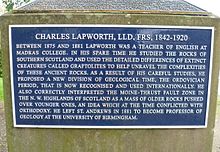 Following his researches in the Southern Uplands Charles Lapworth also devoted time to mapping near Durness in Scotland's northwest highlands and was first to propose the controversial theory that here older rocks were found lying above younger, suggesting complex folding or faulting as a cause. Later Peach and Horne were dispatched to the area and their monumental memoir proved Lapworth correct. In the English Midlands his research involved important work in Shropshire and the demonstration that Cambrian rocks underlay the Carboniferous rocks between Nuneaton and Atherstone.

His son Arthur Lapworth became a renowned chemist and his son Herbert a civil engineer, engineering geologist, stratigrapher and palaeontologist.

Lapworth received many awards for his work and contributions to geology. In June 1888 he was elected a Fellow of the Royal Society and in 1891 was awarded their Royal Medal.[1] In 1899, he received the highest award of the Geological Society of London, the Wollaston Medal, in recognition of his outstanding work in the Southern Uplands, and Northwest Highlands of Scotland.

The glacial Lake Lapworth, was named for him by Leonard Johnston Wills in recognition of his original suggestion of its existence in 1898.[2]