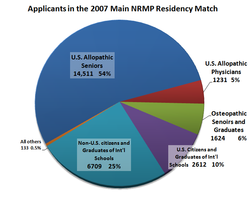 Applicants in the 2007 NRMP 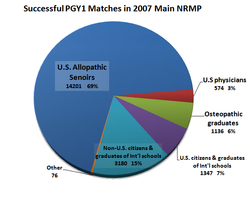 Successful matches in the 2007 NRMP

The National Resident Match Program began in 1952[2] in response to dissatisfaction with the process and results of matching applicants to residency programs via the decentralized, competitive market.[3] From shortly after the first residency programs were formally introduced, the hiring process was "characterized by intense competition among hospitals for (an inadequate supply) of interns."[4] In general, hospitals benefited from filling their positions as early as possible, and applicants benefited from delaying acceptance of positions. The combination of these factors lead to offers being made for positions up to two years in advance. While efforts made to delay the start of the application process were somewhat effective, they ultimately resulted in very short deadlines for responses by applicants, and the opportunities for dissatisfaction on the part of both applicants and hospitals remained.[4]

After its institution in 1952, the NRMP algorithm saw only minor and incremental changes[4] until 1995, when controversy arose regarding whether the program was susceptible to manipulation or unreasonably fair to employers.[5] Indeed, it was shown that in simple cases (i.e. those that exclude couples, second-year programs, and special cases for handling unfilled slots) that had multiple "stable" matchings, the algorithm would return the solution that was best for the hospitals and worst for the applicants.[6][7] It was also susceptible to collusion on the part of hospitals: if hospitals were to organize their preference lists properly, the result returned would be completely unaffected of the preference lists of the residents. As a result, "in the fall of 1995 the Board of Directors of the NRMP comissioned the design of a new algorithm for conducting the match [that would be as favorable as possible to the applicants],[8] and a study comparing it to the existing NRMP algorithm."[9] The new algorithm was adopted in May 1997 and has been in use since its first application in March 1998,[9] although the study showed that the effects of the change on actual matches was minimal.[10]

The problem of matching hospitals to residents is a generalization of the stable marriage problem, and as a result the solutions to the two problems are very similar. A simplified version of the algorithm that is used to perform the match is described on the NRMP website. However, this description does not describe the handling of couples (pairs of applicants who wish to stay in the same geographic location), second-year positions, or special handling of residency positions that remain unfilled. The full algorithm is described in Roth, Alvin; Elliott Peranson (September 1999). "The Redesign of the Matching Market for American Physicians: Some Engineering Aspects of Economic Design". The American Economic Review 89 (4): 756–757. http://www.bepress.com/cgi/viewcontent.cgi?article=1016&context=wilson. Retrieved 14 October 2010.

Senior medical students usually begin the application process at the beginning of their (usually) fourth and final year in medical school. After they apply to programs, programs review applications and invite selected candidates for interviews held between October and February. After the interview period is over, the applicants and programs each compile "rank-ordered lists". For programs, this is a list of applicants in order from most to least preferable. Similarly, for residents not matching in couple, the rank-ordered list is a list of programs in order from most to least preferable.[11] For couples, the rank-ordered list is a list of pairs of schools (or a single school and "No match").[12] In some cases, applicants may also submit secondary lists to simultaneously apply for programs that begin in the second year of residency.

In order to understand how the current NRMP algorithm works, it is helpful to begin by considering the simpler case where there are no couples or secondary programs.

As in the stable marriage problem, the basic goal in the simple case of the hospitals/residents problem is to match applicants to hospitals so that the final result is "stable". "Stability" in this case means that there is no applicant A and hospital H such that both of the following are true:

It can be shown that for any instance of the problem, there is at least one valid solution.[14] Under the old (pre-1995) NRMP algorithm, which favored hospitals over residents, in certain cases hospitals could benefit from lying about their preferences, but that is no longer true under the new system. In neither system can a resident or coalition of residents benefit simply by lying about their preferences, even if they have perfect knowledge of everyone's preferences.[15] (Of course, both systems are susceptible to other forms of collusion. For example, if two applicants apply to the same program, the weaker is still capable of bribing the stronger into ranking the program lower on his list than he would otherwise.)

Under the current system, it is impossible for an applicant to be harmed by including more residency programs at the bottom of his list if those programs are indeed preferable to not being matched.[16]

Adding couples who submit joint preference lists complicates the problem significantly. In some cases there exists no stable solution (with stable defined similarly to the way it is in the simple case). In fact, the problem of determining whether there is a stable solution and finding it if it exists has been proven NP-complete.[17] As a result, the algorithm used by the NRMP is not strictly guaranteed to return a result in a reasonable amount of time, even if one exists. Also, while there is no randomization in the NRMP algorithm—so it will always return the same output when given exactly the same input[18]-- different outcomes can be produced by changing trivial features of the data such as the order in which applicants and programs are processed. However in initial testing of the algorithm over 5 years of residency match data and a variety of different initial conditions, the current NRMP algorithm always terminated quickly on a stable solution.[19] Testing also showed that "none of [the trivial] sequencing decisions had a large or systematic effect on the matching produced"--the maximum number of applicants ever observed to be affected in a single run was 12 out of 22,938.[20]

In general once the hospitals' preference lists have been set, there is no way for an applicant to match into a better position by deciding to match in a couple. For example, if a very strong applicant and a very weak applicant match as a couple, there is no mechanism in the algorithm that allows the stronger applicant to somehow improve the desirability of the weaker applicant.[21] (Of course, if the hospitals know that the stronger and weaker applicant are matching together prior to the run of the algorithm, they are always free to change their preference lists accordingly, which will obviously affect the final outcome.) Ensuring the members of the couple end up in compatible programs is essentially achieved by matching them individually and having them turn down programs, moving on to less desirable ones until their positions are acceptable, though the algorithm does not function exactly in this way.[21] As a result, all else being equal, couples are relatively likely to be matched with less desirable programs than they would have been had they decided to match individually.

However, it is not impossible for couples to match into better positions than they would have individually. First, since the algorithm does depend on some arbitrary factors (e.g. the order in which applicants are processed), one or both of the individuals could end up in a better position by chance alone, although this is extremely unlikely. Second, anything that affects the hospitals' preference lists prior to the run of the algorithm will obviously affect the final outcome, as in the case with the strong and weak applicant above. There is also some belief[22] that being a part of a couple may be appealing in and of itself.

To participate in the NRMP, an international medical graduate is required to have an ECFMG certification[23] by the "rank order list certification deadline" time (usually in February of the year of the match).[24]

To acquire an ECFMG certification, the main requirements are:[25]