Touch Detective (おさわり探偵 小沢里奈, Osawari Tantei: Osawa Rina?, literally "Touch Detective: Rina Osawa") or Mystery Detective in Europe (except in France) is a point-and-click mystery adventure game for the Nintendo DS which makes use of the device's touch screen. It was developed by BeeWorks and released in Japan by Success Corporation. It was developed and released in the United States by Atlus, and in Europe by 505 Games. Touch Detective was released for the iOS on August 4, 2011. Its first chapter is free to download.[1]

The player controls the titular detective Mackenzie as she solves four mysteries in the small town of Osawari. Both the art style and the plot reflect a subtle fantasy mood – for example, the first case is to track down a thief who is stealing someone's dreams. GameZone reviewer Steven Hopper notes that "the game features a unique aesthetic that feels like a Tim Burton version of a Jhonen Vasquez comic."[2] Aside from the main plots, there are also a number of small bonus mysteries that involve much simpler tasks. There is also a Touch Notebook containing a list of major items in the game the player has touched.

The game is entirely controlled via the touch screen. Tapping a location on the screen will talk to a character or examine an object. The player has an inventory of items collected, and may use them on other items or objects in the environment. The player can also communicate with the characters along conversation trees or present inventory items to them to learn new information. Mackenzie's pet mushroom, Funghi, is used as an aid in some puzzles.

Mackenzie
The lead character of the game. As a young girl, she runs a detective agency.

Penelope
One of the girls that lives in the condominiums in town and friend of Mackenzie. Her parents are very rich, and thus she enjoys a lavish lifestyle. However, she is rather air-headed, and has been known to disappear for a time, or even not talk to anyone (including herself, except for pantomime) for a whole week. She is the one who will give Mackenzie all her cases during the game and is one of the main focuses of the first three episodes.

Chloe
Another girl in town, and while friend of Mackenzie, tends to be her rival in trying to solve cases. Chloe generally takes actions before figuring out their consequences.

Cromwell
Butler for Mackenzie and also a genius inventor. Cromwell is a vampire who has worked for Mackenzie's family for over 300 years.

Funghi
A living mushroom that is kept as a pet by Mackenzie and travels with her as she moves about town. 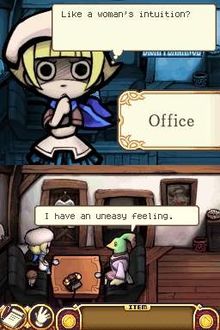 Mackenzie learns that in order to join the ranks of the Great Detective Society, she must solve four cases and submit her investigation report to the Society. Fortunately for her, several cases seem to pop up around town.

Episode 1 - Robbery. The reality of a fanciful dream
Penelope comes to Mackenzie because she claims her dreams are being stolen. Mackenzie first acquires a special invention from Cromwell so that she can see into Penelope's dreams and understands what happens: a strange creature is seen fleeing from Penelope's just before she wakes up. Mackenzie investigates further and finds a way to enter the Dream World, but finds no one there that can help because the rest of the town is not yet asleep. Finding a way to convince everyone to fall asleep at the same time that Penelope does, she is then able to stop the fleeing figure and reveal it to be the pastry chef in town. The chef admits to the crime, using the crystallized dreams as an ingredient in her Sweet Dream Cake dessert. Fortunately, Penelope and the chef agree that the chef will only take Penelope's dreams once a week.

Episode 2 - Disappearance. The truth hidden in the cosmos
Penelope goes missing, and upon investigation, it looks like her room was broken into. However, it is revealed that Chloe, trying to find Penelope before Mackenzie, broke in and tried to find evidence. However, regardless of Chloe's bumbling, Mackenzie is led to the planetarium and its strange owner, as well as a little girl that seems to like playing with dolls. After catching the owner buying girls clothes in sizes too large for the girl, Mackenzie soon discovers that the planetarium owner lured Penelope and now is keeping her in a secret room under mind control in order for her to be the little girl's friend. Mackenzie is able to rescue Penelope, have the owner captured, and befriends the little girl so she won't be lonely again.

Episode 3 - Stranded. The miracle of an innocent heart
Penelope claims that an ice fairy is stranded at the ice skating rink, the only cold place in town, but Mackenzie cannot see it though she can sense it. The owner of the rink is tired of living in the cold and is looking to shut the rink down, causing the temperature in the rink to rise and threaten the life of the fairy. Chloe comes up with two near-disastrous ideas for saving the fairy, but Mackenzie realizes all they need to do is make it snow so the fairy can be get out from the ice rink and to a more comfortable location. Mackenzie helps Chloe in enchanting a spell that summons forth an "angel" (Penelope in an angel outfit) but manage to make snow appear, and thus successfully freeing the fairy.

Episode 4 - Assault. The tragedy of a past grudge
Penelope claims that a murder happened at the circus in town, though it is only a flea circus. Apparently, the circus used to be a larger attraction, but when it shut down, many of the performers took up residence in town. Mackenzie investigates to find that something did attack the fleas, though initially suspecting a flea as the culprit. However, when a large anvil nearly kills all the fleas, the trail leads elsewhere to Dover, one of the ex-performers. His old circus act, animating tattoos on his back, was ruined due to a flea bite, and has been out of work since, and thus took revenge on the flea circus to try to get back into stardom. However, Mackenzie is able to stop him and save the fleas. Or will she?

As of March 4, 2007, Touch Detective has an average rating of 65% from GameRankings,[3] with most critics praising the presentation of the game, but panning the actual gameplay. IGN notes that "the visual style is awesome, the presentation is great, and the audio is extremely entertaining", but otherwise the game "is littered with confusing puzzles, uninformative AI, and an overall shallow experience."[10]