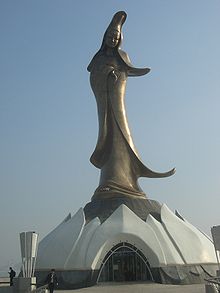 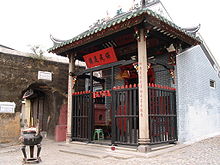 Na Tcha Temple, behind the Ruins of St. Paul's. It is dedicated to the deity Prince Nata.

The Macau government allows freedom of religion and the residents of Macau have the right to practice a religion of their choice. Based on Article 3:34 of the Macau Basic Law: "The people in Macau are free to participate in religious activities and to preach as they wish." In Article 3:120: "The Macau Special Administrative Region embraces the principle of freedom of religion and belief; the government will not interfere in the internal workings of a religious body or organization and the believers are free to maintain ties and to develop relationships with overseas religious organizations outside Macau." Religious organizations can found religious colleges or other schools, hospitals and welfare organizations in accordance with the law. Schools operated by religious institutions can teach their religion. Religious organizations have the right to use, handle, inherit and obtain financial contributions in accordance with the law. Their right to wealth is protected by the law.

When compared with Hong Kong, Macau's religious makeup is far less diverse. Most of its believers are Buddhist, comprising more than three quarters of the population in 2006. Former Portuguese administration of the territory has established Roman Catholicism as one of the main religions in Macau, although Protestant Christianity is also represented. The Bahá'í Faith in 1988 established a teaching institution for 250 students, comprising a kindergarten, primary school, and secondary school and there are about 400 Muslims in Macau, worshipping at one mosque.[1]

Centuries of Portuguese influence has given the Catholic Church a prominent place in Macau's various charity organizations and social welfare work. However, recent reports suggest that Roman Catholicism is in decline in Macau; aided, perhaps, by the territory's booming gambling industry.[2]

The various religious communities maintain peaceful relationships with one another. The Macanese people are generally tolerant of other religious views and practices and public ceremonies and dedications often include prayers led by both Christian and Buddhist groups.

Protection by the Basic Law

The Basic Law of Macau provides for a freedom of conscience, freedom of religious belief, freedom to preach and the freedom to conduct, and participate in, religious activities. Mainland China does not govern religious practices in Macau. The Basic Law states that the government of the Macau Special Administrative Region, in accordance with its principle of religious freedom, will not interfere in the internal affairs of any religious organization nor in the efforts of that organization and its believers to maintain and develop relations with counterparts outside Macau, nor in any way restrict religious activity which does not contravene the laws of the Region. 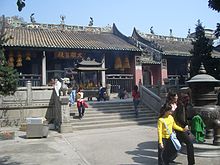 A Buddhist temple in Macau.

The majority of people who live in Macau are ethnic Chinese.

On the birthday of Confucius, which is celebrated on 27 August of the lunar calendar, the organization holds a ceremony of commemoration and sacrifice at which school students are invited to take part. 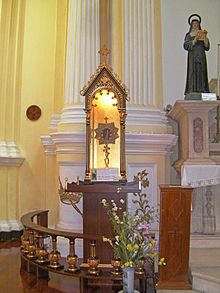 Unlike the Portuguese language, which is in rapid decline locally, Catholicism is a lasting legacy of the Portuguese colonial control of Macau. 36,500 children are enrolled in Catholic schools.

The Catholic Church in Macau is organized through the Diocese of Macau, which follows the Roman (or Latin) Rite. This Catholic diocese was established on 23 January 1576 by Pope Gregory XIII, and is currently limited in extent to the territory of the Special Administrative Region (MSAR) of the People's Republic of China. Since 2003, Bishop José Lai Hung-Seng has been at the head of this corner of the Holy See. Unlike mainland China, the communist authorities in Beijing do not directly interfere with the Church in Macau.

Macau became a diocese of the Catholic Church in the sixteenth century, after the arrival of the Portuguese. At its foundation, the Diocese of Macau was given a wide jurisdiction over various ecclesiastical territories in the Far East, such as China, Japan, Vietnam and Malaysia (but not the Philippines). It became a major training and departure point for Catholic missionaries to different countries in Asia. To further strengthen this role, a college was founded in Sao Paulo in the sixteenth century, the first Western college in Asia for the training of missionaries. In the eighteenth century, the Seminary of St. Joseph was also established to train missionaries and priests.

According to the Pontifical Yearbook 2004, there were about 18,000 practicing Catholics in Macau in that year (representing about 4% of the total population), 24 secular priests, 52 religious priests (members of religious orders), 62 brothers and 183 sisters in the territory.

According to government statistics, Catholics in Macao, in 2005, numbered about 27,000 thousand (about 5.6% of the total population) and most of them were members of the Chinese community, with some Portuguese, people of the Eurasian community with Portuguese descent and thousands of other foreigners, including many Filipinos. There has been a progressive decline in the use of the Portuguese language in the liturgy and increasingly, mass and other sacraments are celebrated in other languages.

Although the Catholic Church is not the predominant religion in Macau, it continues to influence and engage in areas such as social work and education. The Diocese of Macau has six parishes and 24 social institutions, made up of eight daycare centres, six nursing homes for the elderly, five rehabilitation centres for the mentally and physically disabled and five children's homes. In the field of education, in the 2004/2005 school year, the Catholic Church taught in 31 schools, to over 36,000 students and over the years, a large number of influential non-Christians have received a Christian education. In addition, there is a Portuguese Catholic university, an educational institution of higher education known as the Inter-University Institute of Macau.

Among the important annual events are the Good Friday procession and the Feast of Our Lady of Fatima procession.

Today there are about 4,000 practicing Protestants in Macau with an average of just 50 people participating and worshipping in services at each church. Many churches in Macau were founded by different communities from Hong Kong and other countries, representing the Anglican Church, the Baptist Church and the Lutheran Church, but historically there was little cooperation between them. When the Union of Christian Evangelical Churches in Macau was founded in 1990, a new era of cooperation began. In 2006, the 7th Chinese Congress on World Evangelization was held in Macau, further inspiring the Protestant churches in Macau to unite.

Due to pressure in the past from the Portuguese colonial government and the Roman Catholic Church, Protestant churches were allowed to do only limited social, pastoral and educational work. They were also limited by poor funding and many Protestant schools were closed after the "3/12 movement", which reduced even further the role of the Protestant churches in education in Macau. There are only seven remaining Protestant primary and secondary schools in Macau. There are, however, some rehabilitation programmes run by Protestant organisations that receive government support. A Protestant counselling service was started by the Macau Chinese Christian Mission in 2005. Missionaries are free to conduct missionary activities and are active in Macau. Religious entities may use electronic media to preach.

Islam has been present in Macau since before the Ming Dynasty. Although the exact period and manner of its introduction is disputed, it is traditionally held that it was brought to the area by Arab and Persian traders. During World War II, a large number of ethnic Hui Muslims fled to Macau to escape the devastation in the rest of the country.

In 2007, Macau had one mosque and Muslim cemetery to serve the city's more than four hundred Muslims that associate under the name of "The Macau Islamic Society". This mosque was under renovation in the late months of 2007 and planned to double in size in order to provide a more modern mosque in the heart of Macau. Both Muslims and Roman Catholics sometimes choose to name one of their children Fatima, Omar or Soraya.

Macao was one of the areas chosen for the Bahá'í expansion plan known as the Ten Year Crusade. In 1953, Frances Heller, of California, USA, became the first Bahá'í in Macau. In 1954, Yan Peifeng became the first Macau resident to convert to the Bahá'í religion. In March 1964, Macau's Bahá'í population consisted of 30 people. On April 21 1959 the first Local Spiritual Assembly was elected and by 1962 the religion had spread to the islands of Taipa and Coloane. In 1989, Macau formed its first National Spiritual Assembly. At the moment there are four Local Spiritual Assemblies with four hundred members in total, and are collectively known as the Macau Bahá'í Community.

Falun Gong practitioners can be found in Macau.[3] The practitioners exercise daily rituals in public parks, where they have occasionally been observed by police and checked for identification.[citation needed]