For Me and My Gal (film)

For Me and My Gal (film)

Infobox Film
name = For Me and My Gal 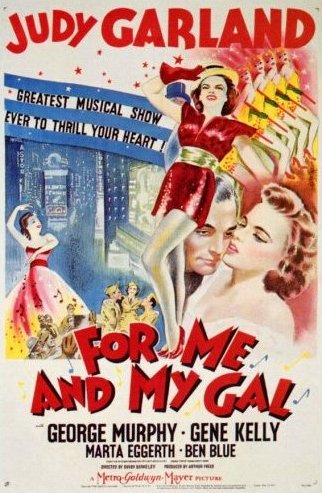 "For Me and My Gal" is a 1942 American directed by and starring , , in his screen debut, and . The movie was written by , Fred F. Finklehoffe and Sid Silvers, based on a story by Howard Emmett Rogers inspired by a true story about vaudeville actors Harry Palmer and when Palmer was drafted into .

"For Me and My Gal" was a production of the unit at .

In the heyday of , just before , two talented performers, Jo Hayden () and Harry Palmer (), set their sights on playing the on Broadway, the epitome of vaudeville success. Just when it seems their ambition will be realized, Harry gets his draft notice and to obtain a deferment, he smashes his hand in a trunk. When Jo, who has just found out that her brother has died "over there", finds out what Harry has done, she leaves the act and rejects him totally. Harry tries desperately to undo what he has done, but his frantic efforts to enlist are rejected because of his injured hand. Finally, he helps out in the only way open to him, entertaining the troops just behind the front lines for the . When he and his partner get too close to the front, Harry heroically acts to stop a convoy of ambulances heading into an artillery bombardment, and destroys the German machine gun nest which is shooting at them. Jo and Harry are reunited when she spots him in the audience at a performance at the Palace Theatre, and brings him onstage to perform "For Me and My Gal," the very first song they performed together.

Although directed by Busby Berkeley, "For Me and My Gal" does not have any of Berkeley's signature large-scale production numbers in it. The songs included in the film are performed as they might have been on the vaudeville stage.

*"For Me and My Gal," music and lyrics by George W. Meyer, and E. Ray Goetz, performed by Gene Kelly and Judy Garland

*"Oh, You Beautiful Doll," music by , lyrics by A. Seymour Brown, additional lyrics by performed by George Murphy, Judy Garland and others

*"When You Wore a Tulip and I Wore a Big Red Rose," music by , lyrics by Jack Mahoney, performed by Gene Kelly and Judy Garland

*The film also contains portions of a number of songs popular during World War I, including "By the Beautiful Sea," "After You've Gone," "," "How Ya Gonna Keep 'Em Down on the Farm (After They've Seen Paree)," "There's a Long, Long Trail" and "Where Do We Go from Here, Boys."

*Two additional songs were intended to be included, "Spell of the Waltz," which was to be performed by Marta Eggerth and a male chorus and "Three Cheers for the Yanks," written by and . [TCM [http://www.tcm.com/tcmdb/title.jsp?stid=660&category=Music Music] ]

"For Me and My Gal" marked the first real "adult" role for Judy Garland, who had played juvenile parts until then, many of them opposite . [All Movie [http://www.allmovie.com/cg/avg.dll?p=avg&sql=1:18138~T1 Review] ] The original script had called for Harry Palmer to be involved with two women, a singer, which was to be Garland's role, and a dancer, who would have most of the dramatic scenes, but , who was an advisor to MGM at the time, suggested to producer that the two roles be combined, and that Garland be given the part. Adler also suggested Gene Kelly for the lead.

Kelly was 30 years old at the time, and had made a mark on Broadway as the star of "" and the choreographer of "". [IBDB [http://ibdb.com/person.asp?ID=15285 Gene Kelly] ] . signed him to a film contract. Kelly's intention was to return to Broadway after fulfilling his contractual obligation, but he ended up staying in Hollywood for a year because Selznick didn't have a role for him. When Arthur Freed inquired about getting Kelly for "For Me and My Gal", Selznick handed over the contract, and Kelly got the part, over the objections of Freed's bosses at MGM. [IMDB [http://www.imdb.com/name/nm0000037/bio Biography for Gene Kelly] ] The casting of Kelly meant that George Murphy, who was originally going to play "Harry Palmer", be switched to playing "Jimmy Metcalf".

Gene Kelly and Judy Garland got along well - she had been in favor of his getting the part, and during shooting she helped Kelly adjust his stage acting for films and backed him up in disagreements with director Busby Berkeley, who she did not like. Kelly and Garland went on to star together in two other films, (1948) and Summer Stock (1950). (They both appeared in 1946's Ziegfeld Follies, but not together.)

The film was also the American motion picture debut of Hungarian singer Martha Eggerth, who had appeared in over thirty films in Germany. Her career in Hollywood did not last long: she appeared in only two other American films. [IMDB [http://www.imdb.com/name/nm0250964/ Martha Eggerth] ]

When the film was initially previewed, the audience was dissatisfied with the ending: they thought that Garland's character should have ended up with George Murphy's character instead of Kelly's. This prompted to order three weeks of additional shooting to give Kelly's character more of a conscience and to reduce Murphy's presence in the film.