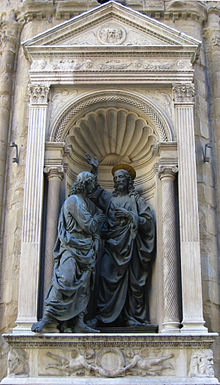 Andrea del Verrocchio's sculpture of the incredulity of St. Thomas.

The term Octave of Easter may refer either to the eight day period (Octave) from Easter Sunday until the Sunday following Easter, inclusive; or it may refer only to that Sunday after Easter, the Octave Day of Easter (sometimes known as Low Sunday). That Sunday is also known historically as St. Thomas Sunday (especially among Eastern Christians), Quasimodo Sunday and Quasimodogeniti. Since 1970 Low Sunday has been officially known as the Second Sunday of Easter (referring to the Easter season) in the Roman Catholic Church. On April 30, 2000, it was also designated as Divine Mercy Sunday by Pope John Paul II.

Octave refers to an eight-day feast or the eighth day following that feast, sometimes referred to as the "Octave Day".

The name Quasimodo came from the Latin text of the traditional Introit for this day, which begins "Quasi modo geniti infantes..." ("As newborn babies...", from 1 Peter 2:2).[1] Literally, quasi modo means "as if in [this] manner".

Incipit of the Gregorian chant introit from the Liber Usualis for the Octave Sunday of Easter, from which it is called "Quasimodo Sunday."

St. Thomas Sunday is so called because the Gospel reading always relates the story of "Doubting Thomas," in which Thomas the Apostle comes to believe in the Resurrection of Jesus only after being told by the resurrected Christ to place his finger in the nail marks and his hand in His side.[citation needed] In the Gospel accounts, this event takes place on the eighth day after the Resurrection, hence their significance for this Sunday (John 20:19-29).

The name "Low Sunday" is sometimes said to derive from its relative unimportance compared to the solemnities of Easter Day, but it is possible that "low" is a corruption of the Latin word Laudes, the first word of the Sequence of the day: "Laudes Salvatori voce modulemur supplici" (Let us sing praises to the Savior with humble voice).[citation needed]

Traditionally, the newly-baptised would receive baptismal gowns that would be worn until this day, and the official Latin name is Dominica in Albis [Depositis], "Sunday in [Setting Aside the] White Garments". Hence "White" and "Alb" Sunday—which is also the etymology of Whitsunday (Pentecost).[citation needed]

The Feast of the Divine Mercy

Divine Mercy Sunday is the culmination of the novena to the Divine Mercy of Jesus, a devotion given to St. Faustina (Maria Faustina Kowalska) and is based upon an entry in her diary stating that anyone who participates in the Mass and receives the sacraments of Confession and the Eucharist on this day is assured by Jesus of full remission of their sins and punishments. The devotion was actively promoted by Pope John Paul II, who canonized St. Faustina and designated the Sunday after Easter as the Sunday of the Divine Mercy (Dominica II Paschae seu de divina misericordia) in the General Roman Calendar.[2] John Paul II, who died in April 2005 on the vigil of Divine Mercy Sunday, was beatified on Divine Mercy Sunday, May 1, 2011, by his successor, Pope Benedict XVI.[3] 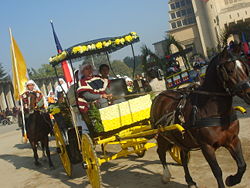 In Chile, mainly in Santiago Metropolitan Region, on Quasimodo Sunday is celebrated the Cuasimodo Feast. Huasos in adorned carriages or bicycles accompany the priest to give communion to the infirm.

Antipascha is the name given to the eighth day of Pascha (Easter) in the Eastern Orthodox, Coptic Orthodox[citation needed] and certain Eastern Catholic churches.

According to the Synaxarion, "On this Sunday, the second Sunday of Pascha, we celebrate the Antipascha, that is to say the re-dedication of the Resurrection of Christ, and also commemorate the event of the Holy Apostle Thomas' touching the wounds of Christ."[4]

Thomas Sunday and Renewal Sunday are other names by which this Sunday is known. The former name refers to the event commemorated that day, described in the Gospel passage read that day at the Divine Liturgy, (John 20:19-31), which recounts the story of Christ appearing to the Apostle Thomas in order to dispel the latter's doubt about the Resurrection.[5] Among Eastern Christians Thomas is not so much remembered as "doubting Thomas," but is rather remembered for his confession of faith: "My Lord and my God," thus being the first to publicly proclaim the two natures of Christ: human and divine. The latter name reflects that on that day the celebration of the Resurrection is repeated and renewed.

The entire week from Pascha to Thomas Sunday, known as Bright Week, is considered to be one continuous day.

He [sc. archdeacon Claude Frollo, Quasimodo's adoptive father] baptized his adopted child and called him Quasimodo; whether it was that he chose thereby to commemorate the day when he had found him, or that he meant to mark by that name how incomplete and imperfectly molded the poor little creature was. Indeed, Quasimodo, one-eyed, hunchbacked, and bow-legged, could hardly be considered as anything more than an almost.[6]