ARVD is caused by genetic defects of the parts of heart muscle (also called myocardium or cardiac muscle) known as desmosomes, areas on the surface of heart muscle cells which link the cells together. The desmosomes are composed of several proteins, and many of those proteins can have harmful mutations.

ARVD is often found in association with diffuse palmoplantar keratoderma, and woolly hair, because their genes are nearby and often inherited together [1]:513[2]

ARVC/D is an important cause of ventricular arrhythmias in children and young adults. It is seen predominantly in males, and 30-50% of cases have a familial distribution.

It is usually inherited in an autosomal dominant pattern, with variable expression. Novel studies showed that mutations (point mutations) in genes encoding for desmosomal proteins (see Intercalated Disc) are the main causatives for the development of this disease. Recently it could be shown, that mutations in the desmin-gene could cause ARVC. Desmin is a intermediate filament protein, which is linked to the desmosomes. The penetrance is 20-35% in general, but significantly higher in Italy. Seven gene loci have been implicated in ARVD. However, about 50% of families that express ARVD that undergo genetic screening do not show linkage with any of the known chromosomal loci. It is unclear whether the pathogenesis varies with the different loci involved. Standard genetic screening test are currently tested and evaluated in different state of the art cardiovascular research centres and hospitals. Types include:

The incidence of ARVD is about 1/10,000 in the general population in the United States, although some studies have suggested that it may be as common as 1/1,000. Recently, 1/200 were found to be carriers of mutations that predispose to ARVC[3] It accounts for up to 17% of all sudden cardiac deaths in the young. In Italy, the incidence is 40/10,000, making it the most common cause of sudden cardiac death in the young population.

Up to 80% of individuals with ARVD present with syncope or sudden cardiac death. The remainder frequently present with palpitations or other symptoms due to right ventricular outflow tract (RVOT) tachycardia (a type of monomorphic ventricular tachycardia).

Symptoms are usually exercise-related. In populations where hypertrophic cardiomyopathy is screened out prior to involvement in competitive athletics, it is a common cause of sudden cardiac death.

The pathogenesis of ARVD is largely unknown. Apoptosis (programmed cell death) appears to play a large role. It is unclear why only the right ventricle is involved. The disease process starts in the subepicardial region and works its way towards the endocardial surface, leading to transmural involvement (possibly accounting for the aneurysmal dilatation of the RV). Residual myocardium is confined to the subendocardial region and the trabeculae of the RV. These trabeculae may become hypertrophied.

The first, fatty infiltration, is confined to the right ventricle. This involves a partial or near-complete substitution of myocardium with fatty tissue without wall thinning. It involves predominantly the apical and infundibular regions of the RV. The left ventricle and ventricular septum are usually spared. No inflammatory infiltrates are seen in fatty infiltration. There is evidence of myocyte (myocardial cell) degeneration and death seen in 50% of cases of fatty infiltration.

The second, fibro-fatty infiltration, involves replacement of myocytes with fibrofatty tissue. A patchy myocarditis is involved in up to 2/3 of cases, with inflammatory infiltrates (mostly T cells) seen on microscopy. Myocardial atrophy is due to injury and apoptosis. This leads to thinning of the RV free wall (to < 3 mm thickness) Myocytes are replaced with fibrofatty tissue. The regions preferentially involved include the RV inflow tract, the RV outflow tract, and the RV apex. However, the LV free wall may be involved in some cases. Involvement of the ventricular septum is rare. The areas involved are prone to aneurysm formation.

While the initiating factor of the ventricular arrhythmias is unclear, it may be due to triggered activity or reentry.

Ventricular arrhythmias are usually exercise-related, suggesting that they are sensitive to catecholamines. The ventricular beats typically have a right axis deviation. Multiple morphologies of ventricular tachycardia may be present in the same individual, suggesting multiple arrhythmogenic foci or pathways.

Right ventricular outflow tract (RVOT) tachycardia is the most common VT seen in individuals with ARVD. In this case, the EKG shows a left bundle branch block (LBBB) morphology with an inferior axis.

The differential diagnosis for the ventricular tachycardia due to ARVD include:

In order to make the diagnosis of ARVD, a number of clinical tests are employed, including the electrocardiogram (EKG), echocardiography, right ventricular angiography, cardiac MRI, and genetic testing.

90% of individuals with ARVD have some EKG abnormality. The most common EKG abnormality seen in ARVD is T wave inversion in leads V1 to V3. However, this is a non-specific finding, and may be considered a normal variant in right bundle branch block (RBBB), women, and children under 12 years old.

RBBB itself is seen frequently in individuals with ARVD. This may be due to delayed activation of the right ventricle, rather than any intrinsic abnormality in the right bundle branch.

The epsilon wave is found in about 50% of those with ARVD. This is described as a terminal notch in the QRS complex. It is due to slowed intraventricular conduction. The epsilon wave may be seen on a surface EKG; however, it is more commonly seen on signal averaged EKGs.

Ventricular ectopy seen on a surface EKG in the setting of ARVD is typically of left bundle branch block (LBBB) morphology, with a QRS axis of -90 to +110 degrees. The origin of the ectopic beats is usually from one of the three regions of fatty degeneration (the "triangle of dysplasia"): the RV outflow tract, the RV inflow tract, and the RV apex. 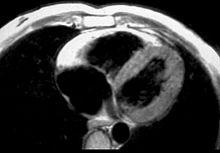 MRI in a patient affected by ARVC/D (long axis view of the right ventricle): note the transmural diffuse bright signal in the RV free wall on spin echo T1 (a) due to massive myocardial atrophy with fatty replacement (b).

Fatty infiltration of the RV free wall can be visible on cardiac MRI. Fat has increased intensity in T1-weighted images. However, it may be difficult to differentiate intramyocardial fat and the epicardial fat that is commonly seen adjacent to the normal heart. Also, the sub-tricuspid region may be difficult to distinguish from the atrioventricular sulcus, which is rich in fat.

Cardiac MRI can visualize the extreme thinning and akinesis of the RV free wall. However, the normal RV free wall may be about 3 mm thick, making the test less sensitive.

Right ventricular angiography is considered the gold standard for the diagnosis of ARVD. Findings consistent with ARVD are an akinetic or dyskinetic bulging localized to the infundibular, apical, and subtricuspid regions of the RV. The specificity is 90%; however, the test is observer dependent.

Transvenous biopsy of the right ventricle can be highly specific for ARVD, but it has low sensitivity. False positives include other conditions with fatty infiltration of the ventricle, such as chronic alcohol abuse and Duchenne/Becker muscular dystrophy. 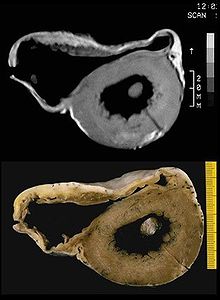 In vitro MRI and corresponding cross section of the heart in ARVD show RV dilatation with anterior and posterior aneurysms (17 year old asymptomatic male athlete who died suddenly during a soccer game).

A post mortem histological demonstration of full thickness substitution of the RV myocardium by fatty or fibro-fatty tissue is consistent with ARVD.

ARVD is an autosomal dominant trait with reduced penetrance. Approximately 40-50% of ARVD patients have a mutation identified in one of several genes encoding components of the desmosome, which can help confirm a diagnosis of ARVD.[4] Since ARVD is an autosomal dominant trait, children of an ARVD patient have a 50% chance of inheriting the disease causing mutation. Whenever a mutation is identified by genetic testing, family-specific genetic testing can be used to differentiate between relatives who are at-risk for the disease and those who are not. ARVD genetic testing is clinically available.[5]

There is a long asymptomatic lead-time in individuals with ARVD. While this is a genetically transmitted disease, individuals in their teens may not have any characteristics of ARVD on screening tests.

Many individuals have symptoms associated with ventricular tachycardia, such as palpitations, light-headedness, or syncope. Others may have symptoms and signs related to right ventricular failure, such as lower extremity edema, liver congestion with elevated hepatic enzymes. Unfortunately, sudden death may be the first manifestation of disease.

The goal of management of ARVD is to decrease the incidence of sudden cardiac death. This raises a clinical dilemma: How to prophylactically treat the asymptomatic patient who was diagnosed during family screening.

Management options include pharmacological, surgical, catheter ablation, and placement of an implantable cardioverter-defibrillator.

Prior to the decision of the treatment option, programmed electrical stimulation in the electrophysiology laboratory may be performed for additional prognostic information. Goals of programmed stimulation include:

Regardless of the management option chosen, the individual is typically suggested to undergo lifestyle modification, including avoidance of strenuous exercise, cardiac stimulants (i.e.: caffeine, nicotine, pseudoephedrine) and alcohol. If the individual wishes to begin an exercise regimen, an exercise stress test may have added benefit.

While angiotensin converting enzyme inhibitors (ACE Inhibitors) are well known for slowing progression in other cardiomyopathies, they have not been proven to be helpful in ARVD.

Individuals with decreased RV ejection fraction with dyskinetic portions of the right ventricle may benefit from long term anticoagulation with warfarin to prevent thrombus formation and subsequent pulmonary embolism.

Catheter ablation may be used to treat intractable ventricular tachycardia. It has a 60-90% success rate.[6] Unfortunately, due to the progressive nature of the disease, recurrence is common (60% recurrence rate), with the creation of new arrhythmogenic foci. Indications for catheter ablation include drug-refractory VT and frequent recurrence of VT after ICD placement, causing frequent discharges of the ICD.

An ICD is the most effective prevention against sudden cardiac death. Due to the prohibitive cost of ICDs, they are not routinely placed in all individuals with ARVD.

Indications for ICD placement in the setting of ARVD include:

Since ICDs are typically placed via a transvenous approach into the right ventricle, there are complications associated with ICD placement and follow-up.

Due to the extreme thinning of the RV free wall, it is possible to perforate the RV during implantation, potentially causing pericardial tamponade. Because of this, every attempt is made at placing the defibrillator lead on the ventricular septum.

After a successful implantation, the progressive nature of the disease may lead to fibro-fatty replacement of the myocardium at the site of lead placement. This may lead to undersensing of the individual's electrical activity (potentially causing inability to sense VT or VF), and inability to pace the ventricle.

Cardiac transplant surgery may be performed in ARVD. It may be indicated if the arrhythmias associated with the disease are uncontrollable or if there is severe bi-ventricular heart failure that is not manageable with pharmacological therapy.

All first degree family members of the affected individual should be screened for ARVD. This is used to establish the pattern of inheritance. Screening should begin during the teenage years unless otherwise indicated. Screening tests include:

Sevilla FC and Spanish international left wing-back Antonio Puerta died from the condition, at the age of 22, on 28 August 2007, three days after suffering several cardiac arrests, while disputing a La Liga game against Getafe CF.[7][8] Englishman Matt Gadsby also died from the condition after collapsing on the pitch on 9 September 2006, while playing with his team Hinckley United in a Conference North game against Harrogate Town.[9][10] Model Krissy Taylor, sister of Niki Taylor, died from the disease at age 17 in 1995.