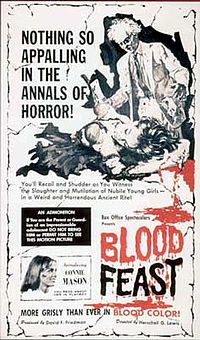 Poster art for Blood Feast, which is considered the first ever splatter film.

A splatter film or gore film is a subgenre of horror film that deliberately focuses on graphic portrayals of gore and graphic violence. These films, through the use of special effects and excessive blood and guts, tend to display an overt interest in the vulnerability of the human body and the theatricality of its mutilation. The term "splatter cinema" was coined by George A. Romero to describe his film Dawn of the Dead, though Dawn of the Dead is generally considered by critics to have higher aspirations, such as social commentary, than to be simply exploitative for its own sake.[1]

Splatter films, according to film critic Michael Arnzen, "self-consciously revel in the special effects of gore as an artform."[3] Where typical horror films deal with such fears as that of the unknown, the supernatural and the dark, the impetus for fear in a splatter film comes from physical destruction of the body. There is also an emphasis on visuals, style and technique, including hyperactive camerawork. Where most horror films have a tendency to re-establish the social and moral order with good triumphing over evil, splatter films thrive on a lack of plot and order. Arnzen argues that "the spectacle of violence replaces any pretentions to narrative structure, because gore is the only part of the film that is reliably consistent."[3] These films also feature fragmented narratives and direction, including "manic montages full of subject camera movement...cross-cuttings from hunted to hunter, and ominous juxtapositions and contrasts."[3]

The splatter film has its aesthetic roots in French Grand Guignol theatre, which endeavored to stage realistic scenes of blood and carnage for its patrons. In 1908, Grand Guignol made its first appearance in England, although the gore was downplayed in favor of a more Gothic tone, owing to the greater censorship of the arts in Britain.[1]

The first appearance of gore—the realistic mutilation of the human body—in cinema can be traced to D. W. Griffith's Intolerance (1916),[citation needed] which features numerous Guignol-esque touches, including two onscreen decapitations, and a scene in which a spear is slowly driven through a soldier's naked abdomen as blood wells from the wound. Several of Griffith's subsequent films, and those of his contemporary Cecil B. DeMille, featured similarly realistic carnage.[citation needed]

In the late 1950s and early 1960s, the public was reintroduced to splatter themes and motifs by groundbreaking films such as Alfred Hitchcock's Psycho (1960) and the output of Hammer Film Productions (an artistic outgrowth of the English Grand Guignol style) such as The Curse of Frankenstein (1957) and The Horror of Dracula (1958). Perhaps the most explicitly violent film of this era[citation needed] was Nobuo Nakagawa's Jigoku (1960), which included numerous scenes of flaying and dismemberment in its depiction of the Buddhist underworld. Other noticeable and influential[citation needed] films from the period includes the French Eyes Without a Face (1959) and the Italian Black Sunday (1960).

Splatter came into its own as a distinct subgenre of horror[citation needed] in the early 1960s with the films of Herschell Gordon Lewis in the United States. Lewis had been producing low-budget nudie films for several years but the market for such fare was losing ground to Hollywood,[citation needed] which was beginning to show more and more nudity in its films. Eager to maintain a profitable niche, Lewis turned to the one thing mainstream cinema still shied away from: scenes of visceral, explicit gore. In 1963, he directed Blood Feast, widely considered the first splatter film.[4] In the 15 years following its release, Blood Feast took in an estimated $7 million. It was made for an estimated $24,500.[5] The film has since become a cult favorite and was followed by the exploitation-style film, Blood Feast 2: All U Can Eat (2002). Lewis' next film, Two Thousand Maniacs! (1964), was remade as 2001 Maniacs in 2005 (with a follow up 2001 Maniacs: Field of Screams in 2010). Both updated versions stuck true to their predecessors in terms of theme and content.[citation needed]

As influential and profitable as it was, for many years Blood Feast remained little seen outside drive-in theaters in the Southern United States.[citation needed] Graphically violent imagery was starting to experience some mainstream acceptance in films such as Bonnie and Clyde (1967), The Wild Bunch (1969), and Soldier Blue (1970), but largely remained taboo in Hollywood.[citation needed]

The first splatter film to popularize the subgenre[citation needed] was George A. Romero's Night of the Living Dead (1968), the director's attempt to replicate the atmosphere and gore of EC's horror comics on film.[citation needed] Initially derided by the American press as "appalling",[citation needed] it quickly became a national sensation, playing not just in drive-ins but at midnight showings in indoor theaters across the country. Foreign critics were more kind to the film; venerable British film magazine Sight & Sound put it on its list of "Ten Best Films of 1968."[1]

Its sequel, Dawn of the Dead, became one of the most successful splatter films, both critically and commercially.[citation needed] It was released in United States theaters unrated rather than with the X-rating it would have received for its explicit carnage. Critic Roger Ebert called it "one of the best horror films ever made."[6] Romero's film was also important in that it upped the ante in terms of technique, special effects and the quality of writing, characterization, and so on.[7]

Roger Ebert in America and Member of Parliament Graham Bright in the U.K. led the charge to censor splatter films on home video with the film critic going after I Spit On Your Grave while the politician sponsored the Video Recordings Act which is a system of censorship and certification for home video.[7] This resulted in the outright banning of many splatter films in the U.K.

Some splatter directors have gone on to produce mainstream hits. Peter Jackson started his career in New Zealand by directing the splatter movies Bad Taste (1987) and Braindead (1992). These films featured so much gore that it became a comedic device. These comedic gore films have been dubbed "splatstick", defined as physical comedy that involves evisceration.[1]

Splatter films have influenced cinema in certain ways. For example, the popular 1999 film The Blair Witch Project' is similar to the 1980 film Cannibal Holocaust.[8] The story in Cannibal Holocaust is told through footage from a group of people making a documentary about a portion of the Amazon which is said to be populated by cannibals. This "mockumentary" format was later used in Blair Witch.

Bijou Phillips in Eli Roth's 2007 film Hostel: Part II, portraying a woman, who in this screen shot, is being tortured.

Despite this era of remakes and reboots, the torture porn genre also sustained life on its own front with the 2009 film The Collector, directed by Marcus Dunstan and co-written with Patrick Melton (both writers from the Saw series), as well as with the sequels of the Saw series (the final film, Saw 3D, having been released during the Fall of 2010), which as of 2009 became the most profitable horror film franchise of all-time.[33] The genre continued into the next decade with the Dutch film, The Human Centipede (First Sequence) (2010), about a German surgeon who assembles the gastrointestinal tract of three kidnapped tourists. A sequel titled, The Human Centipede II (Full Sequence) is planned to be released sometime in 2011, continuing the genre.[34]

Splatter and other genres

The term “splatter film” is often confused with slasher film. While there is often overlap, many slasher movies, like Halloween (1978), are not considered splatter films because they do not have enough on-screen gore. Other films, like Maniac (1980), The Prowler (1981), The Burning Moon (1992) and Haute Tension (2003) can fall into both subgenres.

Many chambara films, a subgenre of samurai movies, contain elements of splatter, where excessive amounts of blood spray from injuries. Examples include Lady Snowblood (1973) and the films of the Lone Wolf and Cub series (1972–74).

The group of transgressive French films known as New French Extremity include such films as Haute Tension, Inside, and Martyrs.[35]