Diagram of a prawn, with the carapace highlighted in orange 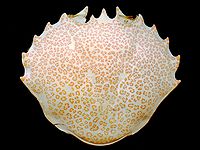 The molted carapace of a lady crab from Long Beach, New York.

In crustaceans, the carapace is a part of the exoskeleton that covers the cephalothorax. It is particularly well developed in lobsters and crabs.

The carapace functions as a protective cover over the cephalothorax. Where it projects forward beyond the eyes, this projection is called a rostrum. The carapace is calcified to varying degrees in different crustaceans.

Zooplankton within the phylum Crustacea also have a carapace. These include Cladocera, Ostracods, and Isopods, however Isopods only have a developed "cephalic shield" carapace covering the head.

Diagram of an arachnid, with the carapace highlighted in purple

In arachnids, the carapace is formed by the fusion of prosomal tergites into a single plate which carries the eyes, ocularium, ozopores (a pair of openings of the scent gland of Opiliones) and diverse phaneres.

In a few orders, such as Solifugae and Schizomida, the carapace may be subdivided. In Opiliones, some authors prefer to use the term carapace interchangeably with the term cephalothorax, which is incorrect usage, because carapace refers only to the dorsal part of the exoskeleton of the cephalothorax.

An alternative term for the carapace of arachnids and their relatives, which avoids confusion with crustaceans, is prosomal dorsal shield.

The carapace is the dorsal (back) convex part of the shell structure of a turtle, consisting primarily of the animal's ribcage, dermal armor and scutes. See the main article on the turtle shell for detailed information.