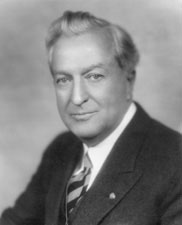 Pat McCarran was born in , the child of Irish immigrants. He attended the , but had to withdraw to work on the family sheep ranch when his father suffered an injury. He passed the state bar exam in 1905, after studying law independently. In 1903 he became a member of the State legislature and after earning his law degree he became of Nye County (1907&ndash;09).

McCarran was also Nevada Chief Justice (1917&ndash;18), chairman of the Nevada State Board of Parole Commissioners (1913&ndash;18) and chairman of the Nevada State Board of Bar Examiners (1919&ndash;32). A member of the Democratic Party, McCarran ran unsuccessfully for Senate in 1916 and 1926. In 1932 he ran a third time, securing the Democratic nomination and defeating Republican incumbent , becoming Nevada's first native-born U.S. Senator. During the 1930s, McCarran became well-known as one of the few Congressional Democrats who totally rejected the .

He sponsored laws concerned with the nation's security, including the of 1938, the of 1945 and the of 1946. He was also an early advocate of a separate Air Force. An admirer of General of , McCarran was nicknamed the “Senator from Madrid” by the columnist Drew Pearson because of his efforts to increase foreign aid to Spain. McCarran’s other favorite foreign leader was Generalissimo of , whose loss of mainland China in 1949 was blamed by McCarran on alleged Soviet spies in the State Department. In 1952, McCarran attended a dinner hosted by the Chinese Ambassador to Washington together with Senators and that began with the toast "Back to the mainland!."

After the Second World War, McCarran established himself as one of the Senate's most powerful anti-Communists. As chairman of the Senate Judiciary Committee, McCarran created and was the first chairman of the that investigated the administrations headed by and . In 1951, investigators from the Senate Internal Security Subcommittee seized the records of the . McCarran made much of these records when questioning the during twelve days of acrimonious testimony in February 1951. It was McCarran who subsequently pushed very strongly for Lattimore to be indicted for alleged acts of during his testimony. Lattimore's lawyer accused McCarran of deliberately asking questions about arcane and obscure matters that took place in the 1930s in hopes that Lattimore wouldn't be able to recall them properly, thereby giving grounds for a perjury indictment because of discrepancies between the I.P.R. records and Lattimore's testimony.

In September 1950 he was the chief sponsor of the . This legislation required registration with the Attorney General of the and affiliated organizations, and established the to investigate possible Communist-action and Communist-front organizations so they could be required to register. Due to numerous hearings, delays and appeals, the act was never enforced, even with regard to the Communist Party of the United States itself, and the major provisions of the act were found to be unconstitutional in 1965 and 1967. [cite book
last = Fried
first = Richard M.
year = 1990
title = Nightmare in Red: The McCarthy Era in Perspective
publisher = Oxford University Press
pages = 187
id = ISBN 0-19-504361-8]

In June 1952, McCarran joined in instigating the passing of the ; a bill that imposed more rigid restrictions on entry quotas to the United States. It also stiffened the existing law relating to the admission, exclusion and deportation of "dangerous" aliens as defined by the McCarran Internal Security Act. In response to the act he made a well known statement:

cquote|I believe that this nation is the last hope of Western civilization and if this oasis of the world shall be overrun, perverted, contaminated or destroyed, then the last flickering light of humanity will be extinguished. I take no issue with those who would praise the contributions which have been made to our society by people of many races, of varied creeds and colors. America is indeed a joining together of many streams which go to form a mighty river which we call the American way. However, we have in the United States today hard-core, indigestible blocs which have not become integrated into the American way of life, but which, on the contrary are its deadly enemies. Today, as never before, untold millions are storming our gates for admission and those gates are cracking under the strain. The solution of the problems of Europe and Asia will not come through a transplanting of those problems en masse to the United States. ... I do not intend to become prophetic, but if the enemies of this legislation succeed in riddling it to pieces, or in amending it beyond recognition, they will have contributed more to promote this nation's downfall than any other group since we achieved our independence as a nation. [Senator Pat McCarran, Congressional Record, March 2, 1953, p. 1518] The immigration provisions of the act were later superseded by the , but the power of the government to deny visas for ideological reasons remained on the books another 25 years after that.

Cartoonist introduced a new character into his comic strip at this time called 'Mole MacCaroney'. Mole's near-blindness and concerns about 'germs' were seen as an attack on McCarran and his immigration-restriction policies. Critics of Kelly pointed to the statement above, claiming McCarran was not anti-immigration, but was opposed to taking in more immigrants than could be assimilated easily.

Pat McCarran remained in the Senate until his death in in 1954. In 1960, the state of Nevada donated a bronze statue of McCarran to the 's .

It is said that McCarran is the basis for the characterization of the corrupt U.S. Senator in "".Fact|date=November 2007

in Las Vegas is named after the Senator.

McCarran Blvd. is a major in .