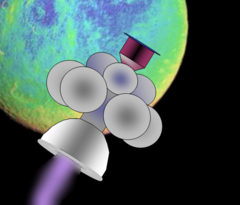 Drawing of the Project Daedalus spaceship

Project Daedalus was a study conducted between 1973 and 1978 by the British Interplanetary Society to design a plausible unmanned interstellar spacecraft.[1] Intended mainly as a scientific probe, the design criteria specified that the spacecraft had to use current or near-future technology and had to be able to reach its destination within a human lifetime. Alan Bond led a team of scientists and engineers who proposed using a fusion rocket to reach Barnard's Star, only 5.9 light years away. The trip was estimated to take 50 years, but the design was required to be flexible enough that it could be sent to any of a number of other target stars.

Daedalus would be constructed in Earth orbit and have an initial mass of 54,000 tonnes, including 50,000 tonnes of fuel and 500 tonnes of scientific payload. Daedalus was to be a two-stage spacecraft. The first stage would operate for two years, taking the spacecraft to 7.1% of light speed (0.071 c), and then after it was jettisoned the second stage would fire for 1.8 years, bringing the spacecraft up to about 12% of light speed (0.12 c) before being shut down for a 46-year cruise period. Due to the extreme temperature range of operation required (from near absolute zero to 1,600 K) the engine bells and support structure would be made of molybdenum TZM alloy, which retains strength even at cryogenic temperatures. A major stimulus for the project was Friedwardt Winterberg's inertial confinement fusion drive concept[2][1] for which he received the Hermann Oberth gold medal award. [3]

This velocity is well beyond the capabilities of chemical rockets, or even the type of nuclear pulse propulsion studied during Project Orion. Instead, Daedalus would be propelled by a fusion rocket using pellets of deuterium/helium-3 mix that would be ignited in the reaction chamber by inertial confinement using electron beams. The electron beam system would be powered by a set of induction coils tapping energy from the plasma exhaust stream. 250 pellets would be detonated per second, and the resulting plasma would be directed by a magnetic nozzle. The computed burn-up fraction for the fusion fuels was 0.175 and 0.133 for the First & Second stages, producing exhaust velocities of 10,600 km/s and 9,210 km/s, respectively. Due to the scarcity of helium-3 it was to be mined from the atmosphere of Jupiter via large hot-air balloon supported robotic factories over a 20 year period.

The second stage would have two 5-meter optical telescopes and two 20-meter radio telescopes. About 25 years after launch these telescopes would begin examining the area around Barnard's Star to learn more about any accompanying planets. This information would be sent back to Earth, using the 40-meter diameter second stage engine bell as a communications dish, and targets of interest would be selected. Since the spacecraft would not decelerate upon reaching Barnard's Star, Daedalus would carry 18 autonomous sub-probes that would be launched between 7.2 and 1.8 years before the main craft entered the target system. These sub-probes would be propelled by nuclear-powered ion drives and carry cameras, spectrometers, and other sensory equipment. They would fly past their targets, still travelling at 12% of the speed of light, and transmit their findings back to the Daedalus second stage mothership for relay back to Earth.

The ship's payload bay containing its sub-probes, telescopes, and other equipment would be protected from the interstellar medium during transit by a beryllium disk up to 7 mm thick and weighing up to 50 tonnes. This erosion shield would be made from beryllium due to its lightness and high latent heat of vaporisation. Larger obstacles that might be encountered while passing through the target system would be dispersed by an artificially generated cloud of particles, ejected by support vehicles called dust bugs, some 200 km ahead of the vehicle. The spacecraft would carry a number of robot "wardens" capable of autonomously repairing damage or malfunctions.

A quantitative engineering analysis of a self-replicating variation on Project Daedalus was published in 1980 by Robert Freitas.[4] The non-replicating design was modified to include all subsystems necessary for self-replication, using the probe to deliver a "seed" factory with a mass of about 443 metric tons to a distant site, having the seed factory replicate many copies of itself there to increase its total manufacturing capacity, and then using the resulting automated industrial complex to construct more probes with a single seed factory on board each over a 1,000 year period. Each REPRO would mass over 10 million tons, mostly fuel needed to decelerate from 12% of lightspeed.