CBWT is the CBC's television station in Winnipeg, Manitoba, Canada. It is the only CBC station in Manitoba, since Brandon's CKX-TV closed on October 2, 2009.

CBWT is the CBC's flagship station for the Central time zone, airing the main CBC schedule one hour after the CBC stations in the Eastern time zone. (For example, The National airs at 10 p.m. ET on CBLT (Toronto) and 10 p.m. CT on CBWT.) This is different from the other Canadian television networks, whose stations in the Eastern and Central time zones air their schedules at the same time (such as 10 p.m. ET and 9 p.m. CT, or "10/9 Central").

CBWT can be seen on several cable systems in northeast North Dakota and northwest Minnesota including cities such as Grand Forks, North Dakota and Bemidji, Minnesota. It appears on Canada's two DBS services on Bell TV channel 226 and on Shaw Direct channel 332. Since 1998 (or later) it was made available in Brandon, Manitoba as digital cable channel 62, and since the demise of CKX-TV, it can now be seen on analogue cable channel 6.

Country Canada, CountryWide and a local edition of CBC News at Six (formerly the local segment of CBC News: Canada Now from 2000 to 2006 and 24Hours from October 5, 1970 to 2000) have been produced out of CBWT. In addition The National has an investigative unit based at the station.

On January 15, 2007, CBWT began airing its first regional (non-news) television program since 2000, Living Winnipeg. The program can be seen weekdays between 3-3:30 p.m. and replayed at 3:30 a.m. On March 26, 2009 the CBC announced that Living was being cancelled on all its stations. 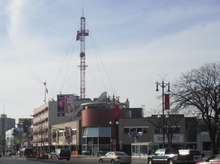 Planning for CBWT started in November, 1952, when the Government of Canada announced its intention of setting up a television station in Winnipeg.[1] The station was announced by J. R. Finlay at a Cosmopolitan Club meeting at the Marlborough Hotel on September 16, 1953. At the time the station was projected to become western Canada's first television station (before Vancouver's CBUT), but was delayed.[2] There was an entry for CBWT in the 1953 MTS telephone book.[3]

In September 1953 CBC Winnipeg moved into a new 50,000 sq ft (5,000 m2). facility at 541 Portage Ave.,[4] from its former location within the Manitoba Telephone Building on Portage Ave. East. It is still there today, and it shares this location with CBW (AM) and CBW-FM.

A few months later, on May 31, 1954,[5] CBWT began as a bilingual station on channel 4 with an EIRP of 60,000 watts.[6] In the same year that CBWT went to air, another station, KXJB-TV (Valley City/Fargo, North Dakota) also began broadcasting. There were doubts from the start whether there would be interference between the two stations.[7]

One of CBWT's first big mobile production was Ice Revue which was broadcast from the Winnipeg Winter Club in March 1956.[9] However, as a mobile production the equipment was different than that present in the studio. Several people had phoned the station complaining that their television set would get stuck in vertical or horizontal hold. This would occur when the switcher at the mobile unit went from one camera to another. Older (tube) television sets had a sync. generator and this was blamed for the reception problem.[10]

On September 30, 1956 it connected to the Trans-Canada Microwave Relay System, which allowed Winnipeggers to watch television programing from CBC television on the same day it was broadcast in Toronto and Montreal.[11] To celebrate this link CBC Television produced a special one-hour program, Along the Tower Trail, the Winnipeg segment featured a view of the CPR's Marshalling Yards, the St. Boniface basilica, a prairie harvest clip, and a musical piece sung by the Andrew Mynarski School choir.[12]

By late 1957 it was decided to move the operating channel of CBWT from channel 4 to channel 3.[13] The changeover occurred in April, 1958.

Eye-To-Eye was a weekly local current affairs program broadcast from 10.15 to 11 p.m. every Tuesday, and was the predecessor to 24Hours. It debut on October 20, 1959, and was similar in style to Close-Up on the national network. The first topics covered were: 'The Slums of Winnipeg', 'Civic Politics — A Sick Joke', and 'Interview — Two Young Ladies'.[14] Eye-To-Eye was produced by Ken Black and Warner Troyer.

On April 24, 1960, the station became English-only, while French programming moved to the newly-launched CBWFT. At the same time two VTRs, worth $75,000 each were installed at the station to replace the kinescope system used previously.[15]

The local version of Reach for the Top debut in 1962 and was hosted by Bill Guest, alternately by Ernie Nairn. The program ran until 1985.

On November 16, 1964 it swapped channels with CBWFT and higher powered transmitters were installed on a new antenna mast 1,064 ft (324 m). high near Starbuck, Manitoba. Reception as far as 113 kilometres would now be possible.[16] This had the effect of improving reception of the station in the towns of Portage la Prairie, Gimli, Carman, Winkler, Morden, Morris, Letellier, Emerson, Altona, and Dominion City. It continues to be the tallest free-standing structure in the province.[17] This is mainly for many FM tuners to get the English feed rather than the French feed on 87.7 FM.

Shortly after the Mulroney government came to power in 1984 they effected major cuts to the CBC, and as a result 86 person staff were let go at CBWT.[19]

There was a second round of major cuts in December 1990, which had a negative effect on local production, especially on the resources of 24Hours.

On February 27, 1997 CBC Manitoba announced that it would update and expand by 2,700 m² its studio facilities for the cost of $2.8 M.[20] In 1998, CBC Manitoba's newsroom and studios were expanded into a new building, after essentially using portables and an abandoned church as its news operations for many years. The television studio now features a window looking down onto Portage. A new digital Betacam SX format was introduced, one of the first CBC stations to transition to make use of it. The first television broadcast from the new studio occurred on Monday, September 21, 1998.

Previous programs produced at CBWT include Fred Penner's Place, It's a Living, and Disclosure. Disclosure was canceled in 2003.

Peter Mansbridge, anchor of The National, began his career at CBWT.

At one time, CBWAT (Kenora) offered separate local news programming from CBWT Winnipeg, although this was discontinued in 1979/80 when CJBN-TV went on the air.

CBC planned to switch from analogue to digital television broadcasting on August 31, 2011, from its Winnipeg transmitter atop the Richardson Building, following the CRTC's mandatory schedule. The switch-over has been delayed twice, both times “to accommodate an unforeseen delay that is outside of the Corporation’s control,” first until September 30, 2011, and then “for the next few weeks or so.”[23]

Country Canada is one of the longest running programs in Canadian television history, and is broadcast nationally. It began as Country Calendar in 1954. The program name was used to create a new digital network, CBC Country Canada, which first aired in September 2001. Spotlight was one of CBWT's first news interview programs, which aired Monday–Saturday between 7.15 and 7.30 p.m.[24]

3's Company was a local program broadcast in the early 1960s and was similar to Living Winnipeg currently airing. The title was a play on both the number of on-air hosts (Mary Liz Bayer, Bill Guest, Jose Poneira), and the channel the CBWT had broadcast on in Winnipeg at the time.[25] However Mary was host of her own show a year earlier The Mary Liz Show.

The Medicine Show was a local production shown nationally, which ran from January 1980 till August 1982. Show Business, hosted by Tom McCulloch, and Ten O'Clock Live, a music program from a local bar, were two local programs produced by CBWT in 1981.[26]

In Search of the Perfect Summer was a summertime series produced by Sean Sullivan and was co-hosted by Anne Harding and Laurie Mustard in the 1982 season. It was nominated Best Variety Program on Television in the (2nd annual) 1982 Winnipeg Broadcast Awards.[27] Laurie won Best Host/Interviewer for the series.[28]

Between 1983 and 1986, Laurie Mustard hosted a Sunday morning local program for kids called Switchback, which was the title used for similar programs across the CBC main network. By 1989 the Winnipeg program was cancelled and amalgamated with Switchback (CBKT Regina) where Winnipeg contributed a portion of the program content.

The end of regional non-news programming came in 2000-01 when Breakaway, aired since June, 1987[29] and was co-hosted by Sandi Coleman, a program profiling different Manitoba towns[30] was canceled in the last round of budget cuts to the CBC. Sandi now hosts the morning program on CBC Radio One Yukon.

The first big story CBWT covered happened on June 8, 1954, about one week after the station opened, where the Time Building (333 Portage Ave.) caught fire. The Time Building was across from the Eaton's building.

News at Noon was CBWT's 30 minute news program that ran until January 1985 when the network program Midday took up the timeslot.[31] It had been previously called Noon Hour, which was a 60-minute program.[32]

Midday ran till 2000, but local noon time news programming has not returned, although CBUT (CBC Vancouver) has since reinstated News at Noon since March 2007. 24Hours, a one-hour news and current affairs program, ran from 1970 to 2000.