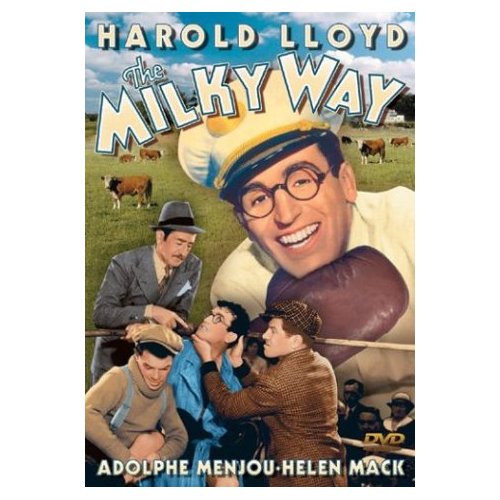 "The Milky Way" is a 1936 starring . Directed by comedy veteran , the film was written by , and based on a play of the same name by Lynn Root and Harry Clork which was presented on Broadway in 1934.

An example of the popular genre of the time, and critically Harold Lloyd's most successful , it tells the story of a milkman who becomes champion. "The Milky Way" features supporting performances by and .

Timid milkman Burleigh Sullivan (Lloyd) becomes involved in a brawl which ends up with Speed McFarland, the world middleweight champion being knocked out cold (he never in fact threw a punch; he merely ducked to get out of the way of a punch which brought the champ down).

McFarland's boss, the crooked Gabby Sloan (), decides to promote Sullivan in a series of fixed fights that will culminate in him being knocked out in a real fight with McFarland. Against all the odds, Sullivan triumphs and becomes world champion.

Cast notes:
* has an uncredited bit part as an extra, his first film appearance.

"The Milky Way" had originally been optioned as a vehicle for with and Gertrude Michael in the main supporting roles, but when Oakie was replaced with , the role of the manager was to go to , because studio executives felt that Lloyd and Horton were too similar in comic style. The part eventually went to .

Filming on "The Milky Way" began on fy|1935, [TCM [http://www.tcm.com/tcmdb/title.jsp?stid=83494 Overview] ] but it was interrupted by the illnesses of Menjou, Teasdale and director , who was hospitalized. McCarey's place was taken by his brother, and by veteran director . During filming, when a suitable white horse for Burleigh could not be found, make-up artists bleached a dark-colored horse blonde.

When producer bought the rights to the property in the mid-1940s for his remake, "" (with in the lead role), he also bought the original negative and almost all existing prints, and destroyed them. Harold Lloyd, however, had preserved his own original nitrate release print, which became the source for the new digital video transfer used by . [Fristoe, Roger [http://www.tcm.com/tcmdb/title.jsp?stid=83494&category=Articles "The Milky Way" (TCM article)] ]