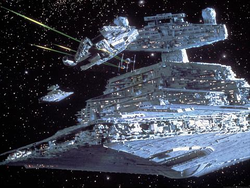 The Star Destroyer first appears in the original Star Wars trilogy. In the 1977 film Star Wars, Han Solo refers to them as "Imperial cruisers".[2] The term "Star Destroyer" is not used in dialogue until Star Wars Episode V: The Empire Strikes Back (1980).[1]

In the original draft scripts of the movie that would become Star Wars, the term "Stardestroyer" refers to two-man fighters flown by what would become the Galactic Empire in later drafts.[1] Industrial Light & Magic (ILM) built a 91-centimeter shooting model of the ship for A New Hope.[1] ILM built another model measuring 259 centimeters, equipped with internal lighting to provide a better sense of scale, for The Empire Strikes Back.[1]

Imperial-class Star Destroyers are constructed by Kuat Drive Yards and hold a distinguished place in the Imperial Navy, symbolizing the Empire's military might with a peak number of more than 25,000 vessels.[3] Like the Victory- and Venator-class ships that precede it, the Imperial Star Destroyer is most notable for its massive size and overwhelming firepower; a single Imperial-class ship is capable of overwhelming most starships or devastating a hostile planet, and its mere presence is often enough to deter rebellion.[3] At 1,600 meters long, Imperial-class Star Destroyers are armed with turbolasers, ion cannons and tractor beam projectors.[3] They carry 72 TIE fighters, numerous ground forces (including stormtroopers, 20 AT-ATs and 30 AT-STs), a prefabricated base for rapid deployment to planetary surfaces and a variety of support and landing craft.[3]

Following the climactic Battle of Endor, the Rebel Alliance captured several Imperial-class ships and added them to their own fleet.[4] As the Rebel Alliance transitioned into the New Republic and gradually took large portions of the galaxy from the remnants of the Empire, it was able to procure more of the powerful ships as well as the vital shipyards and facilities with which to operate them.[5] Although the New Republic eventually upgrades its starfleet with newer ship types, the Imperial-class Star Destroyer remains in service well into the New Jedi Order era and fights during the Yuuzhan Vong war.[5]

Kevin J. Anderson's novel Darksaber describes a Star Dreadnought as being "worth twenty Imperial Star Destroyers".[8] The Executor is Darth Vader's (David Prowse, James Earl Jones) flagship in The Empire Strikes Back and is the Imperial command ship at the Battle of Endor in Return of the Jedi.[7] Admiral Ozzel (Michael Sheard) commands the Executor at the beginning of The Empire Strikes Back, with command shifting to Admiral Piett (Kenneth Colley) later in the movie and persisting through Return of the Jedi. During the Battle of Endor, a crippled A-wing piloted by Arvel Crynyd (Hilton McRae) crashes into the ship's bridge, causing the Executor to crash into the second Death Star and explode.[7]

Roleplaying material identifies the Executor as the first of the Executor class, while starwars.com identifies it as the first of the Super class.[3][7] Wizards of the Coast explains that the "Super class" label was used to hide the ship's "true nature from the Imperial Senate"; this bureaucratic fiction became the source of the type's nickname.[9] Originally described in A Guide to the Star Wars Universe in 1984 as being eight kilometers long, Executor-class ships more recently are described as being 19 kilometers long.[7][10] The depicted size varies greatly in the movies; in The Empire Strikes Back the deflector pods atop the bridge are shown as not much smaller as a standard Star Destroyer but in Return of the Jedi the pods are not much larger than an A-Wing starfighter. Like Imperial Star Destroyers, the Star Dreadnought is manufactured at Kuat Drive Yards.[7]

Another Star Dreadnought, the Lusankya, is described in Michael Stackpole's X-Wing novels as Ysanne Isard's private prison and, later, the primary Imperial support vessel during Isard's time on Thyferra.[11] The ship is captured and used by the New Republic, eventually being destroyed when it rams a Yuuzhan Vong worldship in Aaron Allston's Enemy Lines novels.[5][11] The novel Darksaber features the Night Hammer, a Star Dreadnought "plated with stealth armor", making it "virtually invisible to enemy forces".[8] 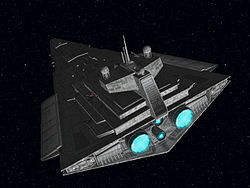 Victory-class Star Destroyers appear as early as Brian Daley's 1979 book Han Solo's Revenge, and since then have appeared in Expanded Universe books and games.[12] Designed by Rendili StarDrive in the Star Wars universe, the Victory-class is 900 meters long and features fewer weapons and less cargo space than an Imperial Star Destroyer.[3]

Venator-class Star Destroyers, also known as "Republic attack cruisers", appear in Revenge of the Sith and in the Expanded Universe.[13] The ship's design is meant to bridge the appearance of the Acclamator-class transports in Star Wars Episode II: Attack of the Clones and the Imperial class in the original trilogy.[13] While the ships first appear with a red and grey Republic color scheme, the Venator at the movie's end is gray and white; this lack of color signifies the Empire's rise to power.[13]

The Star Dreadnought Eclipse is the reborn Emperor Palpatine's flagship in the Dark Empire comic series, and it also appears in the Forces of Corruption expansion for Star Wars: Empire at War.[4][14] According to sourcebooks, the Eclipse's armor and shields allow it to ram Mon Calamari cruisers, and its thousands of armaments include a scaled down version of the Death Stars' superlaser cannon.[4] The ship is destroyed when Luke Skywalker and Leia Organa Solo combine Force abilities to cause Palpatine's Force Storms to go out of control and destroy the vessel.[4] The Eclipse II serves as Palpatine's flagship until it is destroyed in Empire's End. A scaled-down version of the Eclipse, the Sovereign class, is featured in Expanded Universe material from the same time period.[4]

Star Wars creator George Lucas calls the cigar-shaped Separatist cruisers visible at the beginning of Revenge of the Sith "Star Destroyers" in the movie's DVD commentary track.[15] The Dark Nest trilogy by Troy Denning includes two types of Star Destroyers used by the Chiss Ascendancy and the Star Destroyer Admiral Ackbar used by the Galactic Alliance.[16][17] The existence of the Tector-class is established in the Revenge of the Sith Incredible Cross-Sections book.[18] The Rogue Squadron comic books introduce Interdictor-class Star Destroyers that can pull ships out of, or prevent their entry into, hyperspace. The Legacy comics introduce the Pellaeon-class Star Destroyers.

In 2002, Lego released a 3,104-piece Imperial-class Star Destroyer building kit for their Ultimate Collectors' Series line.[19] The model is almost a meter long and includes a scale model of the Rebel Blockade Runner.[19] In 2006, a smaller set was released, just over half a meter long and containing various minifigures.[20]

The Star Dreadnought has also been merchandised. Kenner wanted to use a less ominous name than Executor for the toy playset of Darth Vader's meditation chamber and so used the term "Super Star Destroyer".[7] An advertisement agency's list of 153 alternatives included Starbase Malevolent, Black Coven, Haphaestus VII, and Cosmocurse;[7] ultimately, the toy was labeled "Darth Vader's Star Destroyer".[7] In 2006, Wizards of the Coast created an Executor miniature as part of its Star Wars Miniatures Starship Battles game.[9] An electronic Star Dreadnought toy released by Hasbro "is the rarest among Hasbro's Collector Fleet".[21] Lego will release a 50-inch, 3,152-piece model of the Executor in September 2011.[22]