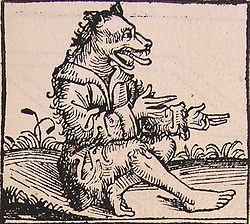 A cynocephalus. From the Nuremberg Chronicle (1493).

The condition of cynocephaly, having the head of a dog — or of a jackal— is a widely attested mythical phenomenon existing in many different forms and contexts.

Cynocephaly is taken from the Latin word cynocephalus, meaning "dog-head", which derives from Greek: κῠνοκέφᾰλοι. The prefix "cyno-" comes from the combining form of Greek: κύων meaning "dog". This prefix forms compound words having "the sense of dog". The suffix "-cephalic" comes from the Latin word cephalicus, meaning "head". This word finds its roots in Greek: κεφαλικός (kephalikos) meaning "capital" from Greek: κεφαλή (kephalē) meaning "head". The suffix "-cephaly", specifically, means "a specific condition or disease of the head". This together forms "a dog-like condition or disease of the head". The phrase cynocephaly also gave birth to the term cynomorph which means "dog-like". This phrase is used primarily as Cynomorpha, a sub-group of the family Cercopithecidae. This family of primates are known as "dog-like apes" and contain many species of macaques and baboons.

Cynocephaly was familiar to the Ancient Greeks from representations of the Egyptian gods Hapi (the son of Horus) and Anubis (the Egyptian god of the dead). The Greek word (Greek: κῠνοκέφᾰλοι) "dog-head" also identified a sacred Egyptian baboon with the face of a dog.[1]

Reports of dog-headed races can also be traced back to Greek antiquity. In the fifth century BC, the Greek physician Ctesias wrote a detailed report on the existence of cynocephali in India.[2] Similarly, the Greek traveller Megasthenes claimed to know about dog-headed people in India who lived in the mountains, communicated through barking, wore the skins of wild animals and lived by hunting.[3]

The "cynocephali" offered such an evocative image of the magic and brutality deemed characteristic of bizarre people of distant places, that it kept returning in medieval literature. Augustine of Hippo mentioned the Cynocephali in City of God, Book XVI, Chapter 8, in the context of discussing whether such beings were descendants of Adam; he considered the possibility that they might not exist at all, or might not be human (which Augustine defines as being a mortal and rational animal: homo, id est animal rationale mortale), but insisted that if they were human they were indeed descendants of Adam.

Cynocephali also figure in medieval Christian world-views. A legend that placed St. Andrew and St. Bartholomew among the Parthians presented the case of "Abominable", the citizen of the "city of cannibals... whose face was like unto that of a dog." After receiving baptism, however, he was released from his doggish aspect.[4]

In the Eastern Orthodox Church, certain icons covertly identify Saint Christopher with the head of a dog. The background to the dog-headed Christopher is laid in the reign of the Emperor Diocletian, when a man named Reprebus, Rebrebus or Reprobus (the "reprobate" or "scoundrel") was captured in combat against tribes dwelling to the west of Egypt in Cyrenaica. To the unit of soldiers, according to the hagiographic narrative, was assigned the name numerus Marmaritarum or "Unit of the Marmaritae", which suggests an otherwise-unidentified "Marmaritae" (perhaps the same as the Marmaricae Berber tribe of Cyrenaica). He was reported to be of enormous size, with the head of a dog instead of a man, apparently a characteristic of the Marmaritae. This Byzantine depiction of St. Christopher as dog-headed resulted from their misinterpretation of the Latin term Cananeus to read canineus, that is, "canine."[5]

The German bishop and poet Walter of Speyer portrayed St. Christopher as a giant of a cynocephalic species in the land of the Chananeans (the "canines" of Canaan in the New Testament) who ate human flesh and barked. Eventually, Christopher met the Christ child, regretted his former behavior, and received baptism. He, too, was rewarded with a human appearance, whereupon he devoted his life to Christian service and became an athlete of God, one of the soldier-saints.[6] 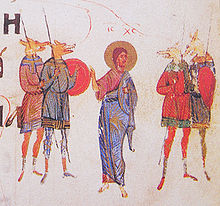 Cynocephali illustrated in the Kievan psalter, 1397

Paul the Deacon mentions cynocephali in his Historia gentis Langobardorum: "They pretend that they have in their camps Cynocephali, that is, men with dogs' heads. They spread the rumor among the enemy that these men wage war obstinately, drink human blood and quaff their own gore if they cannot reach the foe."[7] At the court of Charlemagne the Norse were given this attribution, implying un-Christian and less-than-human qualities: "I am greatly saddened" said the King of the Franks, in Notker's Life, "that I have not been thought worthy to let my Christian hand sport with these dog-heads."[8] The ninth-century Frankish theologian Ratramnus wrote a letter, the Epistola de Cynocephalis, on whether the Cynocephali should be considered human.[9] Quoting St. Jerome, Thomas of Cantimpré corroborated the existence of Cynocephali in his Liber de Monstruosis Hominibus Orientis, xiv, ("Book of Monstrous men of the Orient"). The thirteenth-century encyclopedist Vincent of Beauvais acquainted his patron Saint Louis IX of France with "an animal with the head of the dog but with all other members of human appearance… Though he behaves like a man… and, when peaceful, he is tender like a man, when furious, he becomes cruel and retaliates on humankind".[10]

In Anglo-Saxon England, the Old English word wulfes heafod ("wolf's head") was a technical term for an outlaw, who could be killed as if he were a wolf. The so-called Leges Edwardi Confessoris, written around 1140, however, offered a somewhat literal interpretation: “[6.2a] For from the day of his outlawry he bears a wolf's head, which is called wluesheued by the English. [6.2b] And this sentence is the same for all outlaws.”[11] Cynocephali appear in the Old Welsh poem Pa Gur? as cinbin (dogheads). Here they are enemies of King Arthur's retinue; Arthur's men fight them in the mountains of Eidyn (Edinburgh), and hundreds of them fall at the hand of Arthur's warrior Bedwyr (later known as Bedivere).[12] The next lines of the poem also mention a fight with a character named Garwlwyd (Rough-Gray); a Gwrgi Garwlwyd (Man-Dog Rough-Gray) appears in one of the Welsh Triads, where he is described in such a way that scholars have discussed him as a werewolf.[13][14]

Medieval travellers Giovanni da Pian del Carpine and Marco Polo both mention cynocephali. Giovanni writes of the armies of Ogedei Khan who encounter a race of dogheads who live north of the Dalai-Nor (Northern Ocean), or Lake Baikal.[15] Polo's Travels mentions the dog-headed barbarians on the island of Angamanain, or the Andaman Islands. For Polo, although these people grow spices, they are nonetheless cruel and "are all just like big mastiff dogs".[16]

According to Henri Cordier, the source of all the fables of the dog-headed barbarians, whether European, Arabic, or Chinese, can be found in the Alexander Romance.[17]

Additionally, in the Chinese record History of the Liang Dynasty (Liang Shu), the Buddhist missionary Hui-Sheng describes an island of dog-headed men to the east of Fusang, a nation he visited variously identified as Japan or the Americas. The History of Northern Dynasties of Li Yanshou, a Tang dynasty historian, also mentions the 'dog kingdom'.

Template:Popculture The use of dog-headed, human-bodied characters is still very strong in modern literature. In the domain of comics publishing in North America and in Europe many works feature an "all-cynocephalic" cast or use the heads of dogs and other animals together for social comment or other purposes.

Other dog-headed creatures in legend