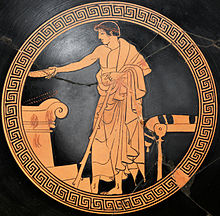 Makron was an ancient Greek vase painter active in Athens ca. 490-480 BC. Though only one signed example of his work is known to have survived, some 350 vases have been attributed to him by Sir John Beazley, making him one of the best surviving painters of the red-figure period.[1]

Makron is strongly associated with the potter Hieron. Beazley attributes all but three vases signed by Hieron as potter to Makron as painter, whereas earlier scholarship did not associate the two. Adolf Furtwängler was the first to do so.[2]