Born in Glasgow, Scotland, he was educated at Bradford Grammar School and the University of London where he achieved an MA degree in 1912. In 1913 he won the studentship for archaeology established jointly by the University of London and the Society of Antiquaries in memory of Augustus Wollaston Franks. Sir Arthur Evans doubled the amount of money that went with the studentship, paying out of his own pocket another £100. In late autumn 1913 he began to work for the Royal Commission on Historical Monuments (England).

At the beginning of World War I he was commissioned into the Royal Artillery (Territorial Force), at first remaining in London as an instructor in the University of London Officers' Training Corps. Then he was posted to several battery commands in Scotland and England until 1917. The last part of the war he fought in France, Passchendaele, the Western Front, near Bapaume, and finally marched into Germany, commanding 'A' Battery of 76th Brigade, RFA. During July 1919 he returned from the Rhineland to London and to civilian life. 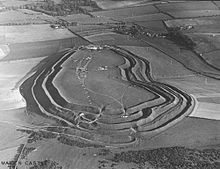 The excavations at Maiden Castle, Dorset, in October 1937 were led by Mortimer Wheeler. Photograph by Major George Allen (1891–1940).

Between 1920 and 1926 he was Director of the National Museum of Wales, and from 1926 to 1944 Keeper of the London Museum. During his career he performed many major excavations within Britain, including that of Roman Verulamium (modern-day St Albans), the late Iron Age hill-fort of Maiden Castle, Dorset and Stanwick Iron Age Fortifications in Yorkshire. The excavation methods he used, for example the grid system (later developed further by Kathleen Kenyon and known as the Wheeler-Kenyon method), were significant advances in archaeological method, although later superseded. He was influenced greatly by the work of the archaeologist Lieutenant General Augustus Pitt Rivers (1827–1900). The two constant themes in his attempts to improve archaeological excavation were, first, to maintain strict stratigraphic control while excavating (for this purpose, the baulks between his trenches served to retain a record of the strata that had been dug through), and, second, to publish the excavation promptly and in a form that would tell the story of the site to the intelligent reader.

When World War II was imminent he returned from excavating a site in Normandy during August 1939 to join the Middlesex Territorial Association at Enfield. He stayed there until 1941 when his unit was transferred into the regular army forces as the 48th Light Anti-Aircraft Battery, which became a part of the 42nd Mobile Light Anti-Aircraft Regiment and went with the 8th Army to Northern Africa. There he served at the Second Battle of El Alamein. During September 1943 he commanded the 12th Anti-Aircraft Brigade during the landing of Allied Forces at Salerno, Italy, Operation Avalanche.

The next year, now 54 years old, he retired from the Army to become Director-General of the Archaeological Survey of India, exploring in detail the remains of the Indus Valley Civilization at Mohenjodaro. Soon after he returned during 1948, he was made a professor at the Institute of Archaeology, but spent part of the years 1949 and 1950 in Pakistan as Archaeological Adviser to the Government, helping to establish the Archaeological Department of Pakistan, and the National Museum of Pakistan at Karachi. He was knighted in 1952 for his services to archaeology.

In 1958 he opened the extension to the Gloucester City Museum & Art Gallery which doubled its available space.[1]

He became known through his books and appearances on television and radio, helping to bring archaeology to a mass audience. Wheeler believed strongly that archaeology needed public support, and was assiduous in appearing on radio and television to promote it. In addition to this he collaborated with the artist and illustrator of books, Alan Sorrell, advising the artist on his archaeological reconstruction drawings. He appeared in three television series that aimed to bring archaeology to the public: 'Animal, Vegetable, Mineral' (1952–60), which was a quiz game, an archaeological variant of Twenty Questions, 'Buried Treasure' (1954–59), and 'Chronicle' (1966), and was named British 'TV Personality of the Year' in 1954. He was Secretary of the British Academy and President of the Society of Antiquaries of London.

In 1969, along with Hugh Trevor-Roper and A. J. P. Taylor, he became a member of the editorial board of Sir Winston Churchill's four volume A History of the English-Speaking Peoples.

In 1914 he married Tessa Verney. Their son Michael, who became a barrister, was born in January 1915. Tessa, who helped with his excavations, died in 1936.

In 1939, he married Mavis de Vere Cole,[2] widow and second wife of the prankster Horace de Vere Cole (d. 1936)[3] and mistress-model of the painter Augustus John. Mavis was a Bright Young Thing (a socialite of the 1920s).

The Churchills were invited to this wedding and sent a book as a wedding present. Wheeler divorced Mavis in 1942 after discovering her with a lover. There were no children of this second marriage.[4]