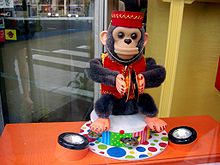 A cymbal-banging monkey toy is a mechanical depiction of a monkey holding a cymbal in each hand. When activated it repeatedly bangs its cymbals together and, in some cases, bobs its head, chatters, grins, does flips, and more. There are both traditional wind-up versions as well as updated battery-operated cymbal-banging monkeys.

The Japanese company Daishin manufactured the classic cymbal monkey during the 1950s and 1960s under the name Musical Jolly Chimp. That version of it screeches and shows his teeth when a button is pressed on his head. Later versions from other toy makers copied the facial expressions but changed the toy's outfit and name. In the mid 1960s through the early 1970s a Japanese built Charley Chimp, was sold by street peddlers on the streets of lower Manhattan in NYC. Other brand names include Wind-up Monkey Playing Cymbals from Russ, Pepi Tumbling Monkey with Cymbal from Yano Man Toys, Clockwork Musical Monkey with Clashing Cymbals, Musical Monkey and Magic Monkey.

With many companies manufacturing various versions in the United States, Hong Kong, and Japan, the toy's appearance varies. The monkey has been seen wearing red and white striped pants and a yellow vest with red buttons, or red overalls and a stocking cap. Other outfits include green striped pants, blue striped pants, a red shirt with either green or blue pants, and plaid blue overalls The monkey is sometimes rendered with red rings painted around their wide-open eyes, creating an appearance many find disturbing, perhaps explaining their many appearances in horror/sci-fi/comedy films media. They can also symbolize emptiness and stupidity.