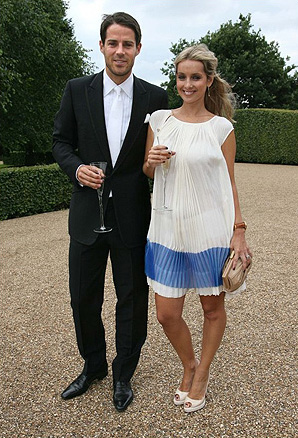 Louise Elizabeth Redknapp (born Louise Elizabeth Nurding, ) is an English singer and , known as a member of the Eternal and subsequently as a solo singer (billed simply as "Louise").

Among UK sport fans she is known as the wife of English footballer-turned-pundit .

In the July 2004 edition of "", she was named Sexiest Woman of the Decade.

While out illegally clubbing (at the age of 16) Nurding met music producer who was forming a girl band. She subsequently introduced him to her friend Kéllé Bryan.

Bryan and Nurding, together with sisters Easther and Vernie Bennett, formed Eternal in 1993. They performed a mixture of heavy R&B, soul, pop and dance. Eternal's debut single "Stay" entered the UK charts at number 4, and their album, "Always and Forever" sold over 1.5 million copies in the UK.

In late 1995 Nurding signed a record deal with First Avenue management and EMI Records. Professionally now known simply as "Louise", her debut solo single was the orchestral ballad "Light of My Life" (which reached #8 on the UK charts), followed by "In Walked Love" (previously a hit from the self-titled 1992 album by the dance/pop group Exposé).

Her third single, "Naked" reached number 5 in the UK, remaining in the top 20 for many weeks; it also charted charts in the rest of Europe.

In 1997 Nurding returned with the single "Arms Around The World"; the song was criticised by media for sounding like 's "Runaway", yet the single reached number 4.

Louise's second solo album, "Woman in Me" reached number 5 in the UK charts and also charted throughout Europe. The reviews from the album were generally very good, many classing it as a mature and diverse pop album.Fact|date=February 2007 Louise embarked on a sold-out tour of over 20 dates, including Wembley Arena.Fact|date=January 2008

"Let's Go Round Again" (a cover of a song by ) was the second single released on the album. While the song only reached number 10 in the charts it became Louise's biggest selling single, selling over 250,000 copies.

At the start of 1998, Nurding's career was at a high point: her album had gone platinum and sold over a million copies, she was on the cover of magazines such as '' and '' and had been voted "The Sexiest Woman In The World" by the readers of "" magazine. The "Louise Soft and Gentle No Sweat Tour", one of the first tours to be choreographed by director/choreographer Fact|date=January 2008, was sold out.

After getting married, Redknapp spent just under a year making what she describedFact|date=January 2008 as her most personal album to date, "". Creatively Louise was more involved in the process of this album than her previous two, co-writing all 12 tracks and co-producing most of them.

The lead single from 'Elbow Beach', the R&B-styled "2 Faced" went straight into the charts at number 3, and became Louise's highest charting single. Despite the initial hype and critical praise, total sales for "Elbow Beach" were weaker than the previous two productions, and the album peaked at number 12.

After the 'Elbow Beach' was released Redknapp had one album left on her five-album deal with EMI (including Eternal's ""). The label decided to release a greatest hits compilation, incorporating all of her 15 top-10 hit singles. It was called "" and featured 3 new tracks, including a cover of 's "".

The album was successful enough to merit a second solo tour. Louise played smaller locations across the UK, and all 36 dates sold out.Fact|date=January 2008

In 2002 Redknapp signed a £1.5 million contract with her manager Oliver Smallman's Positive Records, a division of Universal Music to record her fourth solo album. She worked with producers on both sides of the Atlantic including teams who had worked with the likes of , , , and Fact|date=January 2008, but the album was never released. One single came was released from these sessions, "Pandora's Kiss", which became her last hit single, reaching number 5 in the UK.

After switching managers again (to Merlin Elite), in 2004 several songs were given Internet-only releases: "Bounce Back", "Slam", "Lil' Lou", "Don't Ever Change" and "Make it Fit" (co-written by ).

Career outside of music

On television, Louise has presented editions of , , : Extra Time, This Morning (interviewing fashion designer Tracy Boyd and others), three series of the revived for , and in March 2007 the controversial documentary "The Truth About Size Zero" for .

Alongside her husband and former footballer , Redknapp is publishing a magazine called "", aimed solely at professional sports stars and celebrities.

Redknapp was born in , , to her builder father, and mother who works at . Louise and her two younger brothers grew up in , and , , where she attended the local school. At the age of 11, she joined the stage school and met on her first day. [citeweb|url=http://women.timesonline.co.uk/tol/life_and_style/women/body_and_soul/article3251365.ece|title=How Louise Redknapp beat endometriosis and became a mum|publisher=The Times|date=January 26, 2008|accessdate=2008-01-26]

Louise married now-retired Liverpool, Tottenham and England football player on , . After diagnosis of back pain from , through treatment by surgery, on Redknapp gave birth to a boy named Charley William Redknapp at the . The boy's name was in honour of Louise's grandfather, who died on the day she found out that she was pregnant with Charley. [ [http://www.mirror.co.uk/archive/2004/12/24/baby-joy-of-stars-jamie-and-louise-89520-15009519/ Baby Joy Of Stars Jamie And Louise - Mirror.Co.Uk ] ] . She is currently expecting her second son, due in November 2008

Louise is a vegetarian, who exercises through .