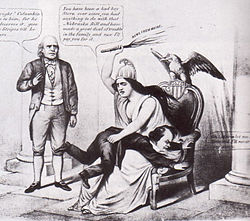 Political cartoon from 1860 depicting Stephen A. Douglas receiving a traditional "over-the-knee" spanking from Columbia as Uncle Sam looks on approvingly.

Spanking refers to the act of striking the buttocks of another person to cause temporary pain without producing physical injury.[1] It generally involves one person striking the buttocks of another person with an open hand. When an open hand is used, spanking is referred to in some countries as slapping or smacking. More severe forms of spanking, such as switching, paddling, belting, caning, whipping, and birching, involve the use of an implement instead of a hand.

Spanking is regarded as abusive in some cultures, but as an acceptable form of discipline in others.

Corporal punishment is most commonly used to discipline an infant, child, or teenager. It generally involves an adult - typically a parent, guardian, or teacher - striking the child's buttocks as punishment for unacceptable behavior. Historically, boys have tended to be more frequently spanked than girls.[2][3][4][5][6] Some countries have outlawed the spanking of children in every setting, but many allow it at least when administered by a parent or guardian. For the legal status of corporal punishment in different countries, see Corporal punishment in the home and School corporal punishment.

In North America, the word "spanking" has often been used as a synonym for an official paddling in school,[8] and sometimes even as a euphemism for the formal corporal punishment of adults in an institution.[9]

In British English, most dictionaries define "spanking" as being given only with the open hand.[10] In American English, dictionaries define spanking as being administered with either the open hand or an implement such as a paddle.[11] Thus, the standard form of corporal punishment in US schools (licks with a paddle) is often referred to as a spanking, whereas its pre-1997 English equivalent (strokes of the cane) would never have been so described.

In Britain, Ireland, Australia and New Zealand, the word "smacking" is generally used in preference to "spanking" when describing striking with an open hand, rather than with an implement. Whereas a spanking is invariably administered to the bottom, "smacking" is less specific and may refer to slapping the child's hands, arms or legs as well as its bottom.[12]

In many cultures, parents have historically been regarded as having the duty of disciplining their children, and the right to spank them when appropriate; however, attitudes in many countries changed in the 1950s and 60s following the publication by pediatrician Dr Spock of Baby and Child Care in 1946, which advised parents to treat children as individuals, whereas the previous conventional wisdom had been that child rearing should focus on building discipline, and that, e.g., babies should not be "spoiled" by picking them up when they cried. The change in attitude was followed by legislation. Since 1979, 30 countries around the world (at 2011) have outlawed domestic corporal punishment of children.[13] In Europe, 22 countries have banned the practice. And in many other places the practice is considered controversial.

A common method of spanking is to have the child or teenager lying, stomach down, across the parent's lap, with the parent bringing their open hand down upon the child's buttocks. Alternatively, the youngster might be told to bend over, or lie face down across a bed.[15] Spankings may be delivered over the trousers, over the undergarments, or upon the bare buttocks.[16] Those who argue in favor of spanking claim that the bottom is the safest place to administer the punishment, since there is little danger of injury to this part of the body.

Opinions are divided on whether spanking is helpful or harmful to a child's behavior. Public attitudes towards the acceptability and effectiveness of spanking vary a great deal by nation and region. For example in the United States and United Kingdom, social acceptance of spanking children maintains a majority position, from approximately 61% to 80%.[17][18] In Sweden, before the 1979 ban, more than half of the population considered corporal punishment a necessary part of child rearing. By 1996 the rate was 11%,[19] and less than 34% considered it acceptable in a national survey.[20]

On the other hand, many scientific researchers and child welfare organizations oppose it. Some studies have suggested that it does not benefit the child, and can encourage problems like anxiety, alcohol abuse, or dependence and externalizing problems.[21] Various other problems have also been claimed.[22]

Some researchers have been critical of these studies as scientifically unsound and have pointed out methodological flaws in how they were conducted, as well as the conclusions drawn.[23][24] However, a longitudinal study by Tulane University in 2010 controlled for a wide variety of confounding variables previously noted and still found negative outcomes in such children.[25] According to the study's leader, Catherine Taylor, this suggests that "it's not just that children who are more aggressive are more likely to be spanked."[26]

Corporal punishment, usually delivered with an implement (such as a paddle or cane) rather than with the open hand, used to be a common form of school discipline in many countries, but it is now banned in much of the western world, including much of Europe, and in Japan, Canada, India, South Africa and New Zealand. These bans have been controversial, and in many cultures opinion remains sharply divided as to the efficacy or suitability of spanking as a punishment for misbehaviour by school students.

Formal caning, notably for teenage boys, remains a common form of discipline in schools in several Asian and African countries, especially those with a British heritage such as Malaysia, Singapore, Tanzania and Zimbabwe; however, in these cultures it is referred to as "caning" and not "spanking".

In the United States, the Supreme Court in 1977 held that the paddling of school students was not per se unlawful. The constitutional ban on "cruel and unusual punishment" applied only to those convicted of crime: the common-law stipulation that school corporal punishment be "reasonable and not excessive" was a sufficient safeguard against misuse.[27] However, 31 states have now banned paddling in public schools. Paddling is still common in some schools in the South, where it is often called "spanking".[28][29]

In some cultures, the spanking of women, by the male head of the family or by the husband (sometimes called domestic discipline) has been and sometimes continues to be a common and approved custom. In those cultures and in those times it was the belief that the husband, as head of the family, had a right and even the duty to discipline his wife and children when he saw fit, and manuals were available to instruct the husband how to discipline his household. In most western countries, this practice has come to be regarded as socially unacceptable wife-beating, domestic violence or abuse. Routine corporal punishment of women by their husbands, however, does still exist in some parts of the developing world,[30][31][32] and still occurs in isolated cases in western countries.

However, there is no evidence of spanking of men by a woman in a domestic context. This may be due to the relative physical strengths of the two genders and the traditionally accepted role of the husband as the head of the family unit. 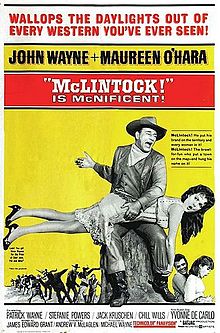 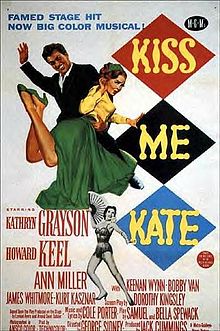 Poster for Kiss Me Kate

Adult female spanking is at times used for entertainment.

The popular 1953 film Kiss Me Kate included a scene with an adult female being spanked. The scene was used in the film's promotion.

The 1963 film McLintock! includes two scenes of adult spanking in which mother and daughter are each paddled with coal shovels: the daughter by her suitor, the mother, played by Maureen O'Hara, by her estranged husband George McLintock, played by John Wayne. The scene was used in the promotion of the film, at first a picture with the shovel in hand was used, but after protests a picture with an open hand replaced the original. The film is loosely based on Shakespeare's The Taming of the Shrew.

The 2002 film Secretary is a notable example of a spanking film. It is a dominant/submissive-themed romantic comedy-drama film directed by Steven Shainberg. It stars Maggie Gyllenhaal as Lee Holloway and James Spader as E. Edward Grey. The film is based on a short story from Bad Behavior by Mary Gaitskill.

The video game God Hand features a spanking move. The player character (Gene) can grab any female opponent, put her over his knee, and spank her repeatedly, before throwing her away and resume the fight. 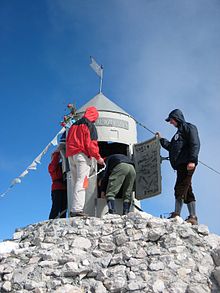 There are some rituals or traditions which involve spanking. For example, on the first day of the lunar Chinese new year holidays, a week-long 'Spring Festival', the most important festival for Chinese people all over the world, thousands of Chinese visit the Taoist Dong Lung Gong temple in Tungkang to go through the century-old ritual to get rid of bad luck, men by receiving spankings and women by being whipped, with the number of strokes to be administered (always lightly) by the temple staff being decided in either case by the god Wang Ye and by burning incense and tossing two pieces of wood, after which all go home happily, believing their luck will improve.[33]

On Easter Monday, there is a Slavic tradition of hitting girls and young ladies with woven willow switches (Czech: pomlázka; Slovak: korbáč) and dousing them with water.[34][35][36]

In Slovenia, there is a jocular tradition that anyone who succeeds in climbing to the top of Mount Triglav receives a spanking or birching.[37]

There was a tradition in Ancient Rome that during the festival of Lupercalia for women to be spanked for good luck.

In North America, there is a tradition of "birthday spankings" where the birthday girl or boy receives the same number of hits as his/her age (plus "one to grow on") during the birthday party. Birthday spankings are administered over the clothes and usually by close friends or family members.