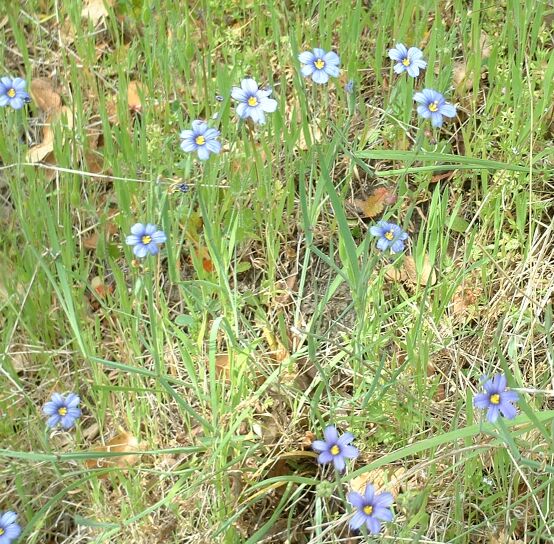 The Western Blue-eyed Grass or Californian Blue-eyed Grass, "Sisyrinchium bellum", is the common of and west of the Sierra Nevadas, its range extending south into . It grows as a in open places where there is some moisture, particularly grassy areas, though it can also be found in woodlands and at altitudes up to 2400 metres. Like other species of blue-eyed grasses that are locally dominant, it is generally known simply as "Blue-eyed Grass" within its natural range.

The stems of the Western Blue-eyed Grass can be as long as 60 cm, though they are often shorter. Its leaves are grassy and tufted. The s are 1 to 2 cm in diameter and purplish-blue, varying somewhat in color from a true blue to a definite purple; occasional white-flowering plants are found. It flowers from March to July. Dried in air, its s weigh between 1 and 4 mg. After flowering, it dies to the ground and is dormant over the summer.

The used an infusion of the roots and leaves as a cure for and stomach pain, and similar uses are recorded from other Native American peoples. Its chief modern use is as an , and it is available for planting in s. It is moderately hardy and will tolerate temperatures down to -12 degrees Celsius.

In parts of its range, Western Blue-eyed Grass has previously been classified as "Sisyrinchium eastwoodiae", "S. greenei" and "S. hesperium", but these names are now considered synonyms.

"S. bellum" prefers some moisture and good drainage, but will tolerate summer dryness. It can be propagated by seed, and it self-sows. It can also be propagated by division of its s, and the flower stems can be rooted.