Soldiers from the Scots Guards open fire in Sidney Street

The Siege of Sidney Street, popularly known as the "Battle of Stepney", was a notorious gunfight in London's East End on the 2nd of January 1911. Preceded by the Houndsditch Murders, it ended with the deaths of two members of a supposedly politically-motivated gang of burglars supposedly led by Peter Piatkow, a.k.a. "Peter the Painter", and sparked a major political row over the involvement of the then Home Secretary, Winston Churchill.

On 16 December 1910, a gang of Latvian thieves attempted to break into the rear of a jeweller's shop at 119 Houndsditch working from 9, 10 and 11 Exchange Buildings in the cul-de-sac behind. An adjacent shopkeeper heard their hammering, informed the City of London Police (in whose area the shop was), and nine unarmed officers — three sergeants and six constables (two in plain clothes) — converged on Exchange Buildings.

Sergeants Bentley and Bryant knocked at the door of No. 11 Exchange Buildings, unaware that the first constable on the scene had already done so, thus alerting the thieves. The gang's leader, George Gardstein, opened the door, but when he did not answer their questions they assumed he did not understand English and told him to fetch someone who did. Gardstein left the door half-closed and disappeared.

The house consisted of a single ground-floor room, into which the front door directly opened, with a staircase leading to the upper floors on the left, and a door to the open yard at the back on the right. It was later deduced that Gardstein must have moved left towards the staircase, since if he had gone right and out of the yard door he would have been seen by one of the plain-clothed officers standing outside, who had a clear view of that side of the room.

Growing impatient, the two sergeants entered the house to find the room apparently empty, before they became aware of a man standing in the darkness at the top of the stairs. After a short conversation, another man entered through the yard door, rapidly firing a pistol, while the man on the stairs also started shooting.

Both officers were hit, with Bentley collapsing across the doorstep, while Bryant managed to stagger outside. In the street, Constable Woodhams ran to help Bentley, but was himself wounded by one of the gang firing from the cover of the house, as was Sergeant Tucker, who died almost instantly.

The gang then attempted to break out of the cul-de-sac, Gardstein being grabbed by Constable Choate almost at the entrance. In the struggle Choate was wounded several times by Gardstein, before being shot five more times by other members of the gang, who also managed to hit Gardstein in the back. They then dragged Gardstein ¾ of a mile to 59 Grove Street, where he died the next day. Constable Choate and Sergeant Bentley died in separate hospitals the same day. An intense search followed, and a number of the gang or their associates were soon arrested.

The Siege of Sidney Street

On 2 January 1911, an informant told police that two or three of the gang, possibly including Peter the Painter himself, were hiding at 100 Sidney Street, Stepney (in the Metropolitan Police District). Worried that the suspects were about to flee, and expecting heavy resistance to any attempt at capture, on 3 January two hundred officers cordoned off the area and the siege began. At dawn the battle commenced.

The defenders, though heavily outnumbered, possessed superior weapons and great stores of ammunition. The Tower of London was called for backup, and word got to the Home Secretary, Winston Churchill, who arrived on the spot to observe the incident at first hand, and to offer advice. Churchill authorised calling in a detachment of Scots Guards to assist the police. Six hours into the battle, and just as the field artillery piece that Churchill had authorised arrived, a fire began to consume the building. When the fire brigade arrived, Churchill refused them access to the building. The police stood ready, guns aimed at the front door, waiting for the men inside to attempt their escape. The door never opened. Instead, the remains of two members of the gang, Fritz Svaars and William Sokolow (both were also known by numerous aliases), were later discovered inside the building. No sign of Peter the Painter was found.[1]Besides the three Policemen, a London Firefighter also died of his injuries.[2]

All the fatal shots in what became known as the "Houndsditch Murders" came from the same Dreyse pistol belonging to Jacob Peters, but as he had left it with the mortally wounded Gardstein to be found by the police, it was assumed to be his and that he was the killer. This was despite the fact that Gardstein had completely different calibre ammunition for a Mauser C96 pistol both on him when he died and in his lodgings, but none at all for the Dreyse. Gardstein's "guilt" was further compounded by the mistaken belief that it was Gardstein who had opened fire at 11 Exchange Buildings from the yard door, on the grounds that it was he who had opened the front door to the police shortly before they were shot.

Of seven supposed members of the gang captured by the police, five men — including Peters — and two women were put on trial, but they all either had their charges dropped, were acquitted, or had their convictions quashed. Peters later returned home, and after the October Revolution served as deputy head of the Cheka.[citation needed] He perished during the Great Purge in 1938.[citation needed] 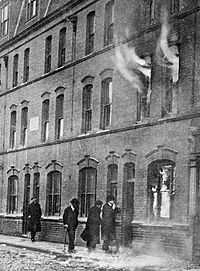 The role Churchill played in the Sidney Street Siege was highly controversial at the time, and many, including Arthur Balfour, the former prime minister, accused him of having acted improperly. A famous photograph from the time shows Churchill peering around a corner to view events. Balfour asked, "He [Churchill] and a photographer were both risking valuable lives. I understand what the photographer was doing but what was the Right Honourable gentleman doing?"

The gang's superior firepower led the police to drop the Webley Revolver in favour of the Webley semi-automatic in London.

Much of the siege was captured by newsreel cameras, including the moment a bullet supposedly passed through Mr Churchill's top hat, coming within inches of killing him. This footage was later shown at the Palace Theatre, London, under the billing, "Mr Churchill in the danger zone"[citation needed], although the incident has been largely dismissed by historians as false.

The siege was the inspiration for the final shootout in Alfred Hitchcock's original 1934 version of The Man Who Knew Too Much. The events were depicted directly in the 1960 film The Siege of Sidney Street.[3]

The siege was parodied by the Goon Show in the episode The Six Ingots of Leadenhall Street.[4][5]