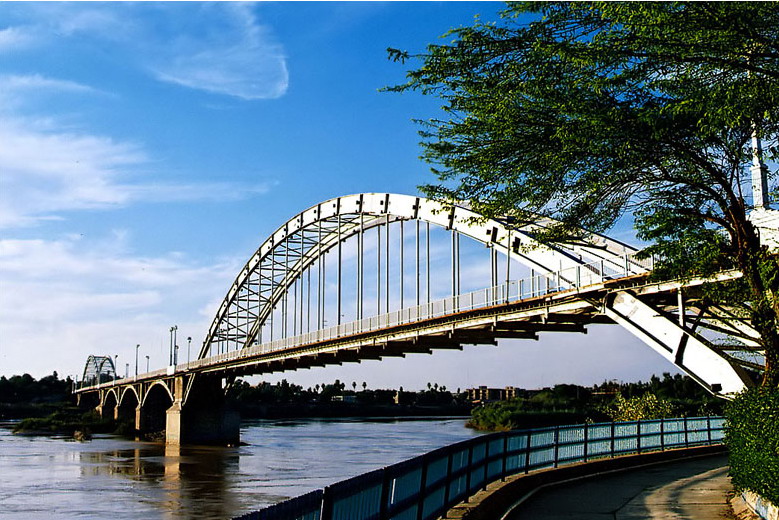 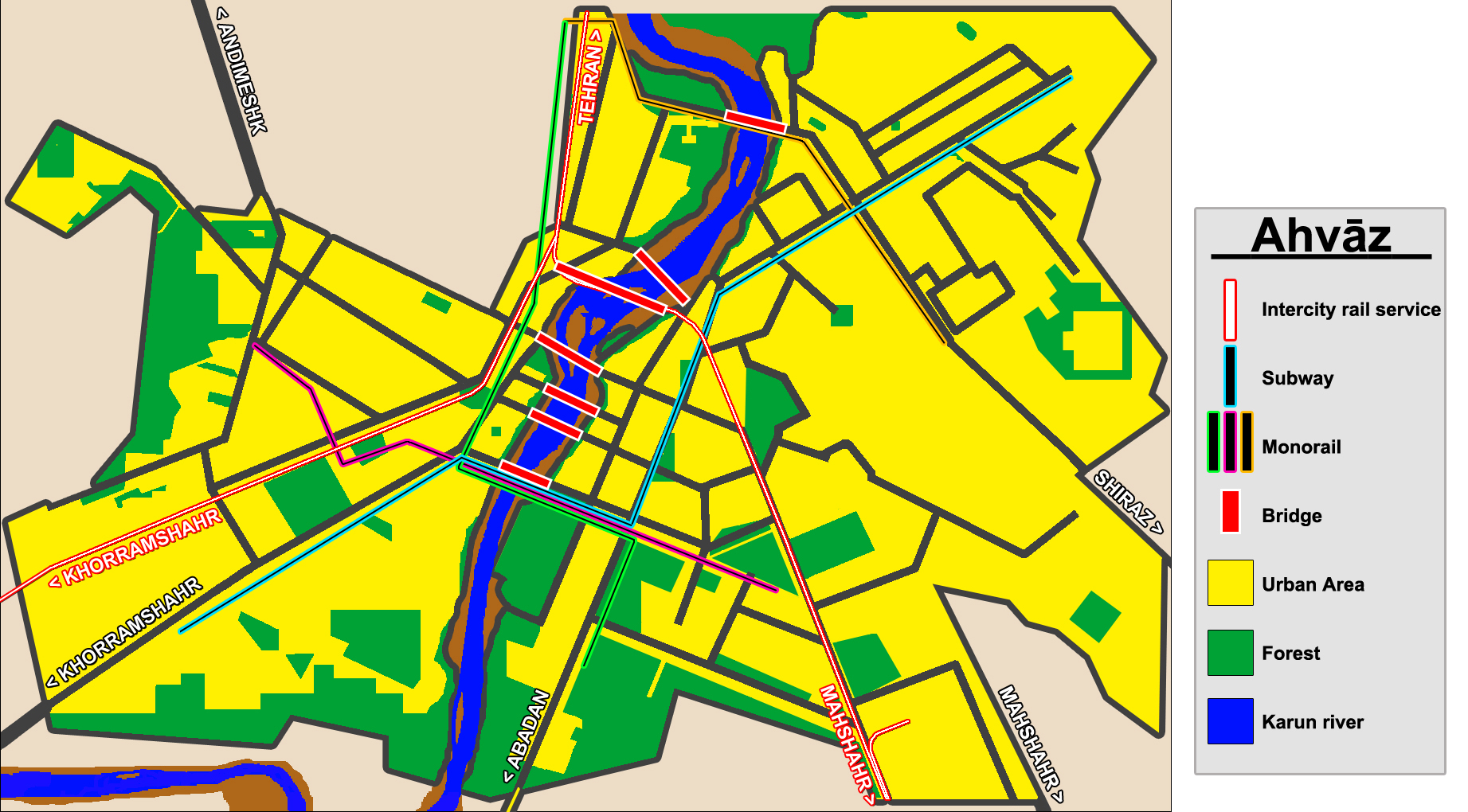 The word "Ahvaz" is a Persianized form of the local "Ahwaz", which in turn itself is derived from a Persian word. The specifically defines the Market of the Khuzis", where "Suq" is Persian word "chahar-suy/sugh" for market, and "Ahwaz" is a plural (اسم جمع) of the form "af'āl" (افعال) of the word "Huz", or more precisely, the root "ha wa za" (ه و ز), which itself comes from the Persian "Huz", from Achaemenid inscriptions from where the term first appears. Thus, which refers to the non-Arabic original habitants of Khūzestān.

The term "Huz", meanwhile, is the rendition of Suz (-), the native name of the region. Old Persian commonly changed the initial "s" in a foreign word into an "h," most famously, in its rendition of the name the river and the people / into Hind/Hindi, which was then Hellenized into , whence .

Ahvaz being the largest city in the province consists of two distinctive districts: the newer part of Ahvaz, the administrative and industrial center, has been built on the right bank of the Karun while residential areas are found in the old section of the city, on the left bank.

For a more comprehensive historical treatment of the area, see the history section of .

Ahvaz is the anagram of "Avaz" and "Avaja" which appear in Darius's epigraph. This word appears in Naqsh-Rostam inscription as "Khaja" or "Khooja" too.Fact|date=April 2007

First named "Ōhrmazd-Ardašēr" (Persian: هرمزداردشیر) (Roamn "Hormizdartazir" [Dodgeon M. H. and Lieu S. N. C., "The Roman Eastern Frontier and The Persian Wars; A Documentary History", London (1991), p.35; ISBN 0-415-10317-7] ) it was built near the beginning of the Sassanid dynasty on what historians believe to have been the site of the old city of "", a notable city under the Persian Achaemenid dynasty. It was founded either by in 230 (cf. "Encyclopædia Iranica", , et al.) or (according to the Middle Persian "Šahrestānīhā ī Ērānšahr") by his grandson ; the town's name either combined Ardashir's name with the Zoroastrian name for God, "Ōhrmazd" or Hormizd's name with that of his grandfather. It became the seat of the province, and was also referred to as "Hūmšēr". During the Sassanid era, an irrigation system and several dams were constructed, and the city prospered. Examples of Sassanid-era dams are "Band-e Bala-rud", "Band-e Mizan", "Band-e Borj Ayar" and "Band-e Khak". The city replaced , the ancient capital of Susiana, as the capital of what was then called Xuzestān.

The city had two sections; the nobles of the city lived in one part while the other was inhabited by merchants. [cf. ""] When the Arabs invaded the area in 640, the part of the city home to the nobility was demolished but the "Hūj-ī-stānwāčār" "Market of Khūz State", the merchant area, remained intact. The city was therefore renamed "Sūq al-Ahwāz", "Market of the "Khuz", a semi-literal translation of the Persian name of this quarter - "Ahwāz" being the Arabic of "Hûz", taken from the ancient Persian term for the native ite peoples, "Hūja" (remaining in medieval "Xūzīg" "of the "Khuz" and modern "Xuzestān" "Khuz State", as noted by (1179-1229) and .

During the and eras, Ahvaz flourished as a center for the cultivation of and as the home of many well-known scholars. It is discussed by such respected medieval historians and geographers as , Tabari, , , , Masudi, and Mostowfi Qazvini. Nearby stood the , where the modern-day teaching hospital is said to have been first established.

Ahvaz was devastated in the bloody Mongol invasions of the 13th and 14th centuries. Ahvaz subsequently declined into a mere village. The dam and irrigation channels, no longer maintained, eroded and finally collapsed early in the 19th century. During this time Ahvaz was primarily inhabited by Arabs and a small number of . Some minor cultivation continued, while all evidence of sugarcane plantations had vanished, although ruins of sugarcane mills from the medieval era remained in existence. [X. de Planhol, ""]

In the 1880s, under Qajar rule, the Karun River was dredged and re-opened to commerce. A newly-built railway crossed the Karun at Ahvaz. The city again became a commercial crossroads, linking river and rail traffic. The construction of the further stimulated trade. A port city was built near the old village of Ahvaz, and named "Bandar-e-Naseri" in honor of Nassereddin Shah Qajar.

Oil was found near Ahvaz in the early 20th century, and the city once again grew and prospered as a result of this newfound wealth. From 1897-1925, Sheikh Khaz'al controlled this area and the name was changed to "Naseriyeh". Afterwards, during the period, it resumed its old name, "Ahvaz". The government of the was transferred there from Shûshtar in 1926. The trans-Iranian railroad reached Ahvaz in 1929 and by the , Ahvaz had become the principal built-up area of interior of Khūzestān. Professional segregation remained well marked between various groups in that period still feebly integrated: Persians, sub-groupings of Persians and s. Natives of the Isfahan region held an important place in retail trade, owners of cafes and hotels and as craftsmen. ["Ibid", p.690]

Iraq attempted to annex Khūzestān and Ahvaz in 1980, resulting in the (1980-1988). Ahvaz was close to the front lines and suffered badly during the war.

Iraq had pressed its claims to Khūzestān in part because many of the inhabitants of the area spoke Arabic rather than Persian, the dominant language in Iran. Iraq had hoped to exacerbate ethnic tensions and win over popular support for the invaders. Most accounts say that the Iranian Arab inhabitants resisted the Iraqis rather than welcome them as liberators. However, some Iranian Arabs claim that as a minority they face discrimination from the central government; they agitate for the right to preserve their cultural and linguistic distinction and more provincial autonomy. See "Politics of Khūzestān".

During the year 2005 the city witnessed a series of bomb explosions. Many government sources relate these events to developments in Iraq, accusing foreign governments of organising and funding Arab separatist groups.

In 1989, the "Foolad Ahvaz" steel facility was built close to the town. This company is best known for its company-sponsored football club, , which was the chart-topper for in 2005. Ahvaz is also home to another IPL football team, .

Ahvaz is also known for its universities as well as its role in commerce and industry. Ahvaz institutes of higher learning include: