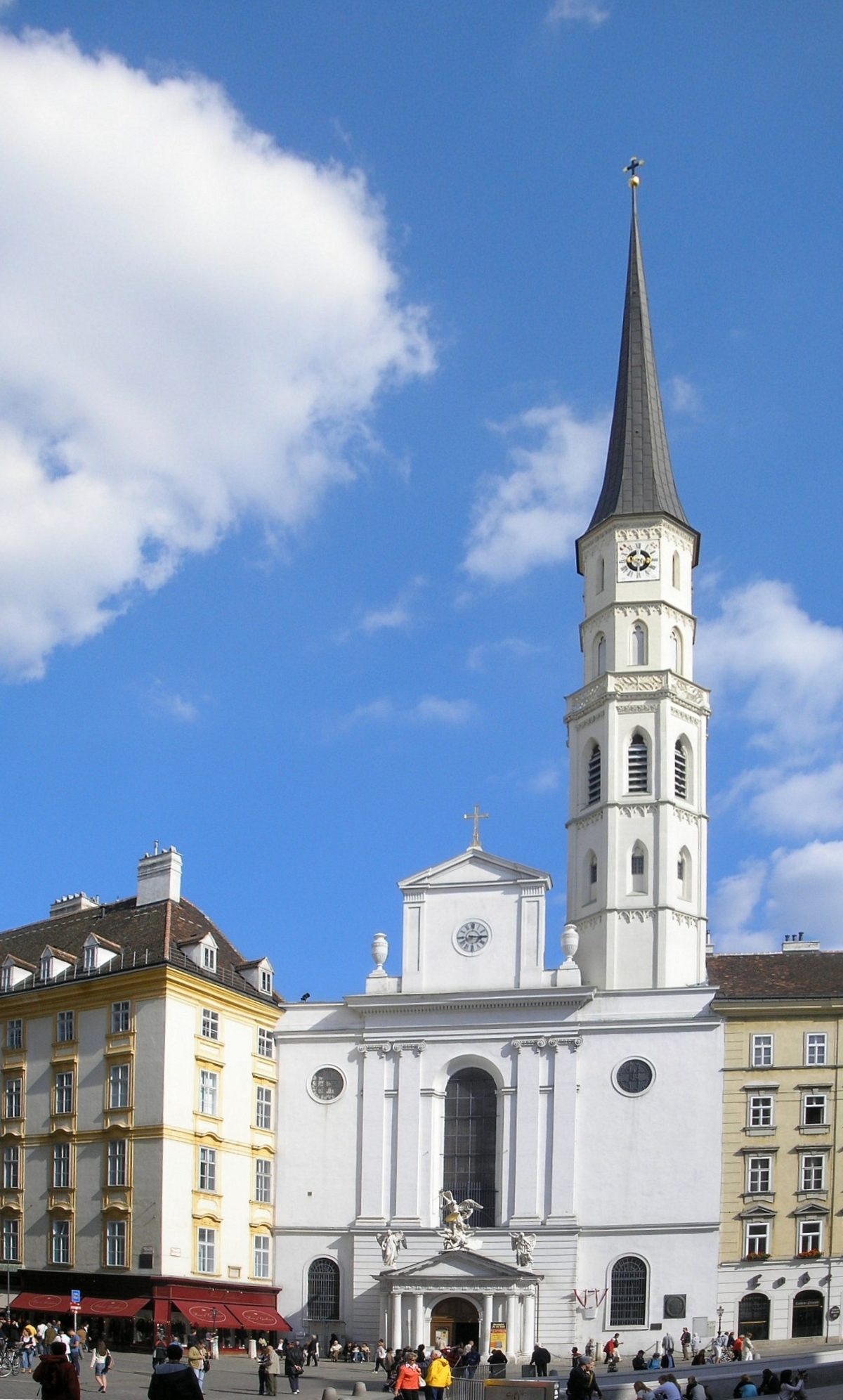 The Michaelerkirche, dedicated to the , is one of the oldest churches in , Austria, and also one of its few remaining Romanesque buildings. In the course of time, there have been many alterations, resulting in its present day aspect, unchanged since 1792.

Over its long history, spanning more than eight centuries, this church has incorporated a medley of architectonic styles. The church is a late Romanesque, early Gothic building dating from about 1220-1240. There is a document, stating 1221 as the foundation date of the church, but this is most probably a 14th century forgery.

The interior of the church consists of a and two aisles that have conserved the ancient Gothic structure. The side chapels were added later on.

It gives the impression of a robust three-dimensional building, even if the church doesn’t rise too high. The polygonal has been replaced in the 14th century (1327-1340) by an early Gothic with three bays. The central and the northern choir chapels were refitted in style. The reliefs in the central choir chapel were executed by (1782).The high altar was designed in 1782 by . It is decorated with the monumental alabaster sculpture “Fall of the Angels” (1782) by the Italian sculptor (also known for his sculptures in the and the Hofburg). It represents a cloudburst of angels and s, falling from the ceiling towards the high altar. It was the last major Baroque work completed in Vienna.

The centerpiece of the high altar is "Maria ", a of the Virgin Mary, belonging to the of , now displayed as being carried by two s.

The southern chapel, the "Nikolauskapelle", has remained unchanged and retains its medieval aspect. Its traceried windows date from the 13th century. It displays Gothic stone sculptures under a ( St. Catherine and St. Nicholaus) (1350) and a wooden crucifix by (1510-1520). This chapel was founded by a cook of the duke at about 1350, giving thanks to the Lord for being acquitted of a poisoning case. The triumphal arch between the and the choir dates from the 14th century. Its is decorated with “The Last Judgment”

The recently rediscovered es from the early 1400’s attest to the high quality of the art of painting in Vienna in those times. The Baptistery shows us in a niche the wooden statue “Man of Sorrows” (1430).

The gilded (1714) by is the largest Baroque organ in Vienna. It was once played by the 17-year old in 1749. Mozart’s Requiem was performed for the first time in this church at a memorial service for the composer on 10 December 1791. As Mozart hadn’t finished this work at the time of his death, only the existing part was performed. One of those who attended the “festive funerary honors” was theater director whose was used by for the “”.

The present was built in 1792 in a Neoclassical style by , a typical style for the reign of emperor Joseph II. Above the entrance, on top of the , resting on Doric columns by , stands a group with winged angels and St. Michael slaying (1725). These sculptural figures were executed by the Italian sculptor Lorenzo Mattielli, who also sculpted the figures at the Hofburg entrance, just opposite the church. The high polygonal Gothic bell tower from the 16th century has become one of the symbols of the Inner City.

The church is famous for the "Michaelergruft", the immense underneath the church. Noblemen and rich citizens were often buried beneath the church. This practice started in 1560 and went on until emperor Joseph II ended this in 1784. These families could buy their own family crypt. But these were very expensive. The proceeds were used to maintain the crypt in good condition. The crypts of the aristocracy were accessible by marble slabs, marked with their coat of arms, in the church floor. The coffin of a deceased of the family could then be lowered directly into the crypt via these marble slabs.

Due to the special climatic conditions and constant temperature in the crypt, more than 4000 corpses were kept well preserved. Hundreds of mummified corpses, some still in burial finery or with a wig, are on display, some in open coffins, adorned with flowers or skulls, others decorated with Baroque paintings or with vanitas symbols. The most famous among them is (1698-1782), the writer of the libretto "Libretto Il sogno di Scipione" , used by of Mozart in his opera .