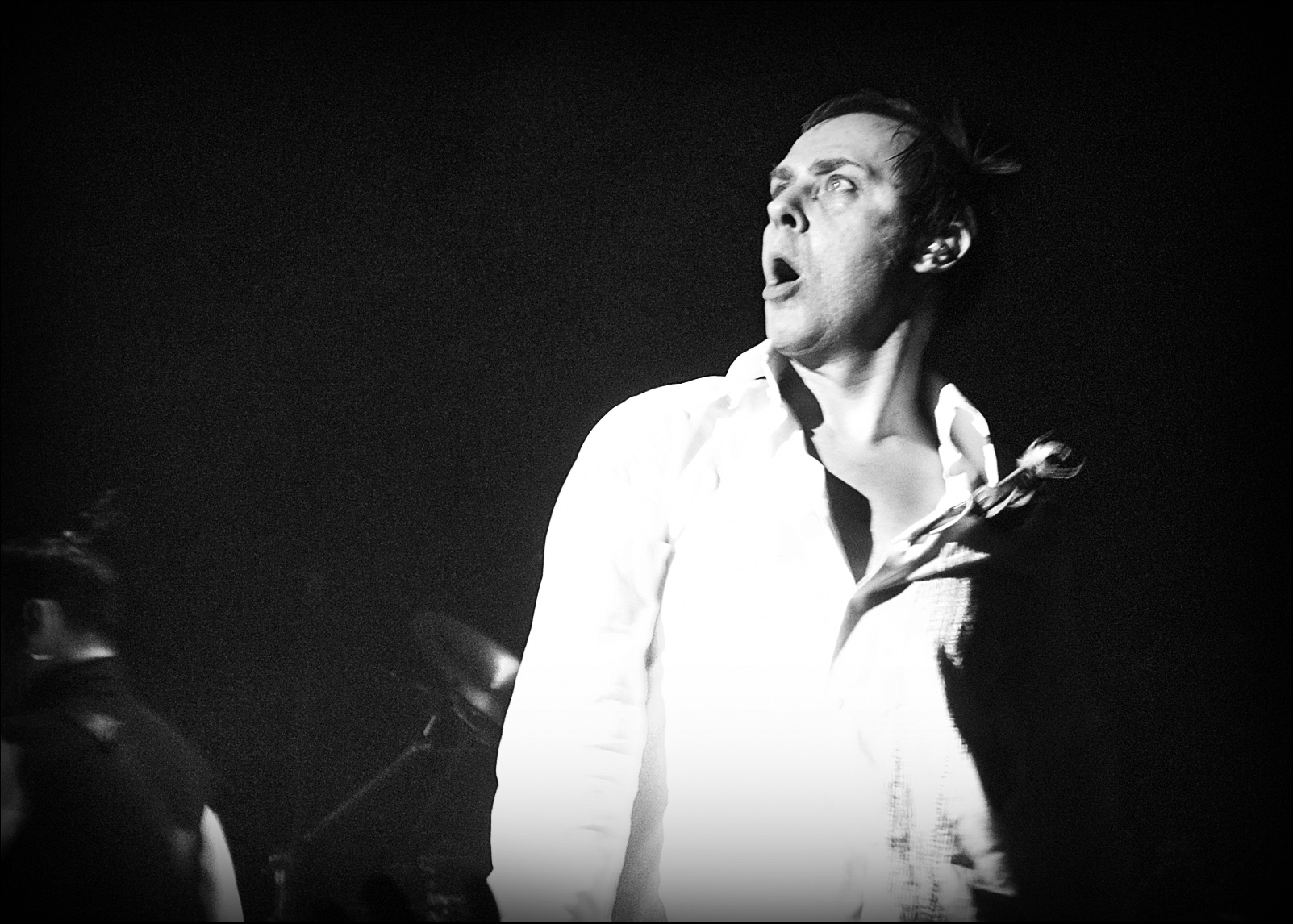 Peter John Murphy (born , near , , raised in , ), is the vocalist of the rock group Bauhaus who later went on to release a number of solo s, such as "Deep" and "". Thin, with prominent cheekbones, a rich voice, and a penchant for gloomy poetics, Murphy is often called the "Godfather of Goth."Fact|date=August 2008

Whether rising from on-stage, driving a called the "Bauhearse," or appearing in concert as , Bauhaus was one of the establishing acts of the goth movement. Their use of spacy recording effects and theatrical aesthetics was evocative of both early horror films and glam rock; they became an influential group in the early days of .

In 1982, Bauhaus appeared during the opening sequences of the horror movie "," performing one of their most popular songs, "". The camera focused almost exclusively on Murphy during most of the scene, panning only briefly to the stars and .

Bauhaus reformed in 1998 for a tour, and once again in 2006 for a tour with . The latter group's frontman, , and Murphy were guests on several radio shows together, often performing three to four duets per radio show. Reznor cites Bauhaus as one of his primary musical influences, and had toured with Murphy earlier in both their careers.

By 1983, Bauhaus broke up and Murphy went on to new projects not involving Bauhaus members , , or . After some brief dabbling with acting and dance - including a slightly odd televised performance to Bauhaus's "Hollow Hills" - he soon formed with , the bass player from Japan. The group recorded only one album, which was a commercial flop.

Murphy's solo career over time became more varied than Bauhaus, ranging from pseudo-pop to haunting ballads that showcased his deep and complex vocals. While criticsweasel word allege his lyrics can be "pretentious" to "incomprehensible," the lyrical themes are often metaphysical or religious. His knack for such lyricism and the occasional pop-reinvention did, however, cause some initial trepidation by the record-buying public. After the commercial non-start of Dali's Car, Murphy's first solo album was similarly overlooked. "Should the World Fail to Fall Apart" did spawn several singles, including a cover of Pere Ubu's "Final Solution" that made a minor splash on the club scene.

The followup, "Love Hysteria", did much better. It also marked the beginning of a long-term collaboration with songwriter , who co-wrote songs with Murphy until 1995. The resulting singles "All Night Long" and "Indigo Eyes" helped garner a wider following, and the black-and-white video for "All Night Long" entered rotation on MTV.

The pinnacle of Murphy's solo popularity came with the release of "Deep". For this album Murphy reinvented himself as somewhat of a rock-god, now sporting hair dyed platinum blonde and performing a much more aggressive alt-rock sound. The single "" from "Deep" held on to the top spot on the Billboard chart for longer than any other single before - displacing "So Alive" by his former Bauhaus-bandmates Love and Rockets. The record was unbroken until the release of R.E.M.'s "."

Although he had grown up in an Irish-Catholic household [ [http://www.usatoday.com/community/chat/2001-09-25-murphy.htm Transcript of a USATODAY chat with Murphy] ] , Murphy converted to in the 1990s, eventually moving to with his wife. A subsequent ern influence can be heard in his later albums. In particular, Murphy has been inspired by the mysticism of . 1992's "Holy Smoke" mixed some traditional Turkish influences into the music while continuing the sound pioneered on "Deep". The album was unable to recapture the momentum of "Deep", and in the post- alternative landscape, the more pop-flavored album seemed anachronistic, and the choice of the odd, disheveled-Murphy photo used on the cover baffled many fans. In 1995, Murphy embraced a lower-key, ambient pop sound for "Cascade", featuring producer , guest work from "infinite guitarist" , and overall a much stronger incorporation of electronics. This album was also to be his last major collaboration with Paul Statham, who departed to form with Pascal Gabriel and eventually write songs for Dido and . "Cascade" was also Murphy's last original release for Beggar's Banquet records, which had been his label since Bauhaus. Shortly after this departure, Murphy recorded the "Recall" EP for the newly-formed Red Ant records, featuring a few new songs and some new, heavily electronic versions of older material, reworked in conjunction with , and of the band . Once again, he became label-mates with former Bauhaus alums Love and Rockets, who had also signed to Red Ant. This generated a significant number of rumours regarding a possible reformation of Bauhaus. While Red Ant quickly folded, Bauhaus did reform in 1998 for the "Resurrection" tour, one performance of which (at the , New York City) was recorded and released on DVD by as "Gotham". The tour was a success, although Murphy refused to perform certain songs, because of his adherence to Islam, such as "Stigmata Martyr" and "St. Vitus' Dance." He cited their religious overtones as objectionable.

In 2000, Murphy performed his international "Just for Love" tour, which resulted in the album "aLive Just for Love". It is a live recording of the fully uninterrupted set from the El Rey show in Los Angeles on , 2000. During the tour, Murphy chose to perform with only two back-up musicians, Canadian ist and from on guitar, although former Bauhaus bassist sometimes joined the trio for an encore. At this point he also contributed to works by noted film composer .

Also in 2000, Murphy gave a nod to the North American goth scene, where his solo works and his works with Bauhaus are still very popular, by making a surprise guest appearance at the sixth annual Convergence festival in Seattle, to perform a low-key, acoustic solo set.

Shortly thereafter, Murphy collaborated with the Turkish artist on the album "Dust". Heavily steeped in traditional Turkish instrumentation and songwriting, coupled with Dede's trademark atmospheric electronics, the album showed Murphy all but abandoning his previous pop and rock incarnations. "Dust", released on goth/industrial stalwart label Metropolis Records, alienated many fans who had expected a more uptempo Murphy album (especially post-"Recall"), but it garnered some critical praise. Peter Murphy considers it's most unique work to date and is most proud of the song "Your Face" from the album. [ [http://www.postwave.gr/index.php?option=com_content&task=view&id=794&Itemid=10&limit=1&limitstart=1 Interview with Peter Murphy about Bauhaus, "Go Away White" and his solo career, February 2008] ]

In 2004, Murphy signed to yet another new label, , which was home to several other 1980s pop artists who had moved into more eclectic areas. Despite numerous problems with the label, the album "Unshattered" was released, showcasing Murphy returning to a more pop sound.

Murphy undertook extensive tours of the U.S.A and Europe to promote 'Unshattered' in 2005, with a live band featuring guitarist of and on guitar, Jeff Schwartoff of and on bass and Justin Bennett of on drums. Murphy and the band reconvened in November 2007 for shows in Portugal and Spain, with replacing Bennett on drums. In May 2008 Murphy recorded a cover of the song "" with Trent Reznor and Jeordie White from Nine Inch Nails. This was played live at an intimate studio performance, and the video recording was released on both the official Nine Inch Nails website and YouTube. A US tour is scheduled for summer 2008.

Peter Murphy was the model for 's UK "Blown Away Guy" ad campaign which ran in the 1980s, with its tagline of "Sentence your cassette to life." Despite the rumor, he's not the younger model in the omnipresent US edition of the campaign.

He is married to Beyhan and has two children, named Hurihan and Adem. His wife has directed several of his videos, and leads the Turkish National Modern Dance company. He has been living in since 1992.