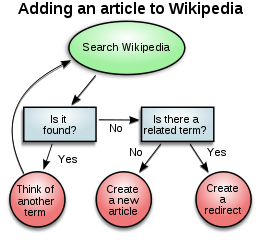 Sample flowchart representing the decision process to add a new article to Wikipedia.

A diagram is a 2D geometric symbolic representation of information according to some visualization technique. Sometimes, the technique uses a 3D visualization which is then projected onto the 2D surface. The term diagram in common sense can have two meanings.

In science the term is used in both ways. For example Anderson (1997) stated more generally: "diagrams are pictorial, yet abstract, representations of information, and maps, line graphs, bar charts, engineering blueprints, and architects' sketches are all examples of diagrams, whereas photographs and video are not".[2] On the other hand Lowe (1993) defined diagrams as specifically "abstract graphic portrayals of the subject matter they represent".[3]

In the specific sense diagrams and charts contrast computer graphics, technical illustrations, infographics, maps, and technical drawings, by show "abstract rather than literal representations of information".[1] The essences of a diagram can be seen as:[1]

Or in Hall's (1996) words "diagrams are simplified figures, caricatures in a way, intended to convey essential meaning".[4] These simplified figures are often based on set of rules. The basic shape according to White (1984) can be characterized in terms of "elegance, clarity, ease, pattern, simplicity, and validity".[1] The elegance for a start is determined by whether or not the diagram is "the simplest and most fitting solution to a problem".[5]

There are at least the following types of diagrams: