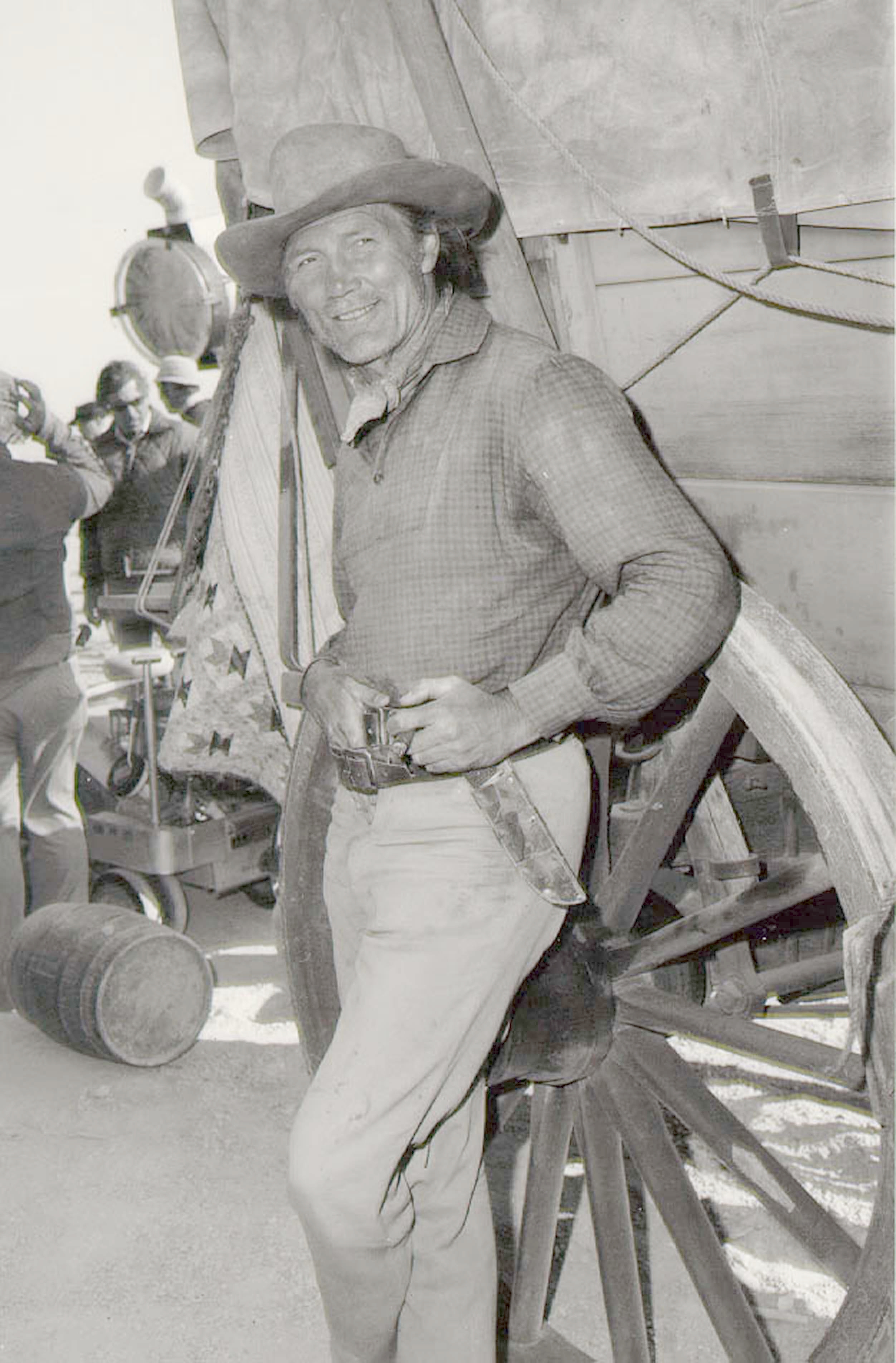 Jack Palance (born Volodymyr Palahniuk; , – , ) was an Oscar-winning American film . With his rugged facial features, Palance was best known to modern movie audiences as both the characters of Curly and Duke in the two "" movies, but his career spanned half a century of film and television appearances.

Palance, one of five children, was born Volodymyr Palahniuk ( _uk. Володимир Палагнюк) in the Lattimer Mines section of , the son of Anna (née Gramiak) and Ivan Palahniuk, who was an coal miner. [ [http://www.filmreference.com/film/63/Jack-Palance.html Jack Palance Biography (1920?-)] ] Palance's parents were Ukrainian immigrants, [ [http://www.ukemonde.com/palance/last_role.html The Last Role of an American "City Slicker" with a Ukrainian Soul] ] [ [http://news.bbc.co.uk/1/hi/entertainment/6138310.stm BBC NEWS | Entertainment | Veteran western star Palance dies] ] his father a native of Ivane Zolote in Southwestern Ukraine and his mother from the region. [ [http://www.ukrweekly.com/Archive/2006/470609.shtml OBITUARY: Academy Award-winning actor Jack Palance, 87 (11/19/06)] ] He worked in coal mines during his youth before becoming a boxer.

In the late 1930s, Palance started a professional boxing career. Fighting under the name "Jack Brazzo", Palance reportedly compiled a record of 15 consecutive victories with 12 s before fighting the future contender in a "Pier-6" brawl. Palance lost a close decision, [ [http://www.boxrec.com/boxer_display.php?boxer_id=041420 Boxing Records] Official records only show Palance in one sanctioned fight. His other fights may have been club fights.] [ [http://select.nytimes.com/gst/abstract.html?res=FB0C10F6385E127A93C6A81788D85F408585F9 M. A. SCHMIDT, "PALANCE FROM PANIC TO PAGAN", , , , Drama Section X5] In an early interview, Palance claimed to have fought Baksi to a draw] and recounted: "Then, I thought, you must be nuts to get your head beat in for $200". [ [http://pqasb.pqarchiver.com/latimes/access/21416664.html?dids=21416664:21416664&FMT=ABS&FMTS=ABS:FT&type=current&date=Apr+30%2C+1995&author=Lawrence+Christon&pub=Los+Angeles+Times+(pre-1997+Fulltext)&edition=&startpage=3&desc=Home+on+the+Range+It%27s+been+a+long%2C+dusty+journey+since+%60Panic+in+the+Streets%27+and+%60Shane.%27+These+days%2C+Jack+Palance+is+tough+as+boot+leather-except+when+it+comes+to+talking+about+his+own+life Lawrence Christon, "Home on the Range It's been a long, dusty journey since Panic in the Streets and Shane", , , , Calendar Section] In a later interview, Palance admits to have lost to Baksi]

With the outbreak of the Second World War, Palance's boxing career ended and his military career began as a member of the . Palance's rugged face, which took many beatings in the boxing ring, was disfigured when he bailed out of his burning while on a training flight over southern , where he was a student pilot. Plastic surgeons repaired the damage as best they could, but he was left with a distinctive, somewhat gaunt, look. After much reconstructive surgery, he was discharged in 1944.

Palance graduated from in 1947 with a degree in . During his university years, to make ends meet he also worked as a , , , at , and photographer's model.

Palance's acting break came as 's in "A Streetcar Named Desire", and he eventually replaced Brando on stage as Stanley Kowalski.

In 1947, Palance made his Broadway debut, and this was followed three years later by his screen debut in the movie "" (1950). The very same year, he was featured in "Halls of Montezuma" about the U.S. Marines in World War II, where he was credited as "Walter (Jack) Palance". Palance was quickly recognized for his skill as a character actor, receiving an Oscar nomination for only his third film role, as Lester Blaine in "". The following year, Palance was again nominated for an Oscar, this time for his role as the evil gunfighter Jack Wilson in "Shane". ' music album "" features sound bites from that movie. Jack Palance makes a cameo in the song "5.01 A.M. (The Pros and Cons of Hitch Hiking)", not as Jack Wilson, but as a biker ("An angel on a Harley...") who says "How you doing, bro? Where you been? Where you going?"

Several other Western roles followed, but he also played such varied roles as , and .

In 1957, Palance won an Emmy for best actor for his portrayal of Mountain McClintock in the "" production of 's "".

persuaded Palance to take on the role of Hollywood producer Jeremy Prokosch in the 1963 movie "Le Mépris", with and . Although the main dialogue was in French, Palance spoke mostly English.

While still busy making movies, in the 1960s Palance also released an album of country-Western music for Records. This happened in 1969 and it recalled the music that was popular at the time. Recorded in Nashville with the usual studio cats, the album is a playful romp not unlike other late 60's Nashville recordings and featured Palance's self penned classic song ''. The album was re-released in 2003 by the "Walter" label in CD version.

He also hosted (with his daughter ) the television series "".

Appearances in "" (1988) and 's "Batman" (1989) reinvigorated Palance's career, and demand for his services kept him involved in new projects each year right up to the turn of the century.

In 2001, Palance returned to the recording studio as a special guest on friend 's "Heart of the Holidays" album to narrate the famous classic poem .

Four decades after his film debut, Palance won an on , , for his performance as cowboy Curly Washburn in the 1991 comedy "". Stepping onstage to accept the award, the intimidatingly fit 6' 4" (1.93 m) actor looked down at 5' 7" (1.70 m) Oscar host (who was also his co-star in the movie), and joked — mimicking one of his lines from the film — "Billy Crystal... I crap bigger than him." He then dropped to the floor and demonstrated his ability, at age 73, to perform one-handed push-ups. Crystal then turned this into a running gag. At various points in the broadcast, he announced that Palance was backstage on the ; had "just bungee-jumped off the "; had rendezvoused with the in orbit; had fathered all the children in a production number; had been named "People" magazine's ; and had won the . At the end of the broadcast, Crystal told everyone he'd like to see them again "but I've just been informed Jack Palance will be hosting next year." (The following year, host Crystal arrived on stage atop a giant model of the Oscar statuette, being towed by Palance using his teeth.)

Palance, at the time chairman of the , walked out of a Russian Film Festival in Hollywood. After being introduced, Palance said "I feel like I walked into the wrong room by mistake. I think that Russian film is interesting, but I have nothing to do with Russia or Russian film. My parents were born in Ukraine: I'm Ukrainian. I'm not Russian. So, excuse me, but I don't belong here. It's best if we leave." [ [http://www.ukemonde.com/palance/russianfilmfest.html Declaring 'I'm Ukrainian, not Russian', Palance walks out of Russian Film Festival in Hollywood ] ]

Daughter Brooke married Michael Wilding, son of Sr. (1912-1979) and ; and they have three children as well.

An actor himself, Cody Palance appeared alongside his father in the film "", and was just 42 when he died from on , . Jack Palance had hosted "The Cody Palance Memorial Golf Classic" to raise awareness and funds for a cancer center in Los Angeles. Besides being an actor, at one time Cody Palance was also a great music performer who did many live performances with his band. [ [http://www.hankstermania.com/Cody.htm Pics of Cody Palance performing live] ]

Palance painted and sold landscape art, with a poem included on the back of each picture. He is also the author of "The Forest Of Love", a book of poems, published in 1996 by Summerhouse Press.

True to his roots, Palance acknowledged a life-long attachment to his Pennsylvania heritage and visited there when able. Shortly before his death, he had placed his Butler Township, Pennsylvania, Holly-Brooke farm up for sale and his personal art collection up for auction.

Palance died at the age of 87, of natural causes, at his home in Montecito in Santa Barbara County.

Following other recent celebrity auctions, Palance's personal lifetime collection of over 3,000 items at his Holly-Brooke Farm (named for his two daughters) in Butler Township, Pennsylvania went on the auction block in October 2006. Auction planners purposely included some smaller keepsakes for people who wanted something belonging to the 87-year-old actor. "People can spend $5 or $50,000 at this auction", said Phil Eagle, an antique appraiser who traveled from to painstakingly verify the items' and sort them into manageable lots to be sold.

"Each item will bear a special sticker featuring a picture of the actor and the words 'Jack Palance Collection' to add to the value and future collectibility", Eagle said.