Calogero Lorenzo "Chazz" Palminteri (born May 15, 1952) is an American actor and writer, best known for his performances in The Usual Suspects, A Bronx Tale, and his Academy Award nominated role for Best Supporting Actor in Bullets Over Broadway.

Palminteri is of Sicilian origin; his family is originally from Menfi in the province of Agrigento. His grandparents, Calogero Palminteri and Rosa Bonfante, married in 1908 and moved from Menfi to the United States in 1910. According to the biography on Netflix, Chazz Palminteri was born in the Bronx on May 15, 1952. He struggled to become a star, splitting his time between working as a bouncer, alongside Dolph Lundgren, and acting in off-Broadway plays. His big break didn't come until 1988 with the premiere of his one-man show, "A Bronx Tale," which eventually was made into a movie (1993). On a T.V. special[which?] Chazz said he witnessed a murder right in front of him similar to the murder in his play and movie, A Bronx Tale.

Palminteri has had acclaimed dramatic performances in films such as The Perez Family, Jade and Diabolique, as well as comedic roles in films such as Oscar, Analyze This and Down to Earth. During its run, Palminteri did many advertisements for Vanilla Coke, in which he portrayed a mob boss who would threaten celebrities if they didn't praise the taste of the product in question, and then let them walk away with the Vanilla Coke to "reward their curiosity", touching on its slogan at the time. Palminteri has voiced characters in various animated films, the most notable being 2006's Hoodwinked.

He made his directorial debut with the 2002 television film, Women vs. Men. He has also directed the 2004 film Noel which starred Alan Arkin and Susan Sarandon. Palminteri's recent efforts include A Guide to Recognizing Your Saints, Running Scared and Arthur and the Minimoys.

In 2004, he received the "Indie Hero Award" from the Method Fest Independent Film Festival for his artistic achievements in film.

Chazz Palminteri starred on Broadway in A Bronx Tale the semi-autobiographical one-man show he first performed off-Broadway in 1989. The production, directed by Jerry Zaks and with music by John Gromada, began previews October 4, 2008 at the Walter Kerr Theatre and opened on October 25, running for 18 weeks. Palminteri plays 18 roles in A Bronx Tale, which depicts a rough childhood on the streets of the Bronx. The play ran for two months at Playhouse 91 in 1989. Robert De Niro saw this show there and made his directorial debut with the big-screen version, co-starring with Palminteri.[1] 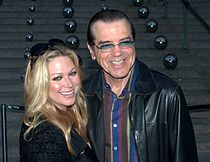 Palminteri with his wife Gianna Ranaudo in New York City, 2010.

On January 20, 2010, Palminteri guested on Modern Family and played the same character on the November 2, 2011, episode.[2] In June 2010, Palminteri began guest-starring on the TNT crime drama Rizzoli & Isles as Frank Rizzoli, Sr.[3]

Palminteri will portray deceased mobster Paul Castellano in the upcoming John Gotti biopic Gotti: In The Shadow Of My Father.

Palminteri lives in Bedford, New York. He describes himself as a "very spiritual," devout Roman Catholic.[4] He is married to actress Gianna Ranaudo, with whom he has two children: Dante Lorenzo (born Wednesday, October 11, 1995) and Gabriella Rose (born Tuesday, December 25, 2001). He is a self-avowed New York Yankees fan, and is often heard as caller "Chazz from Bedford" on WFAN-AM, a sports radio station.[5]