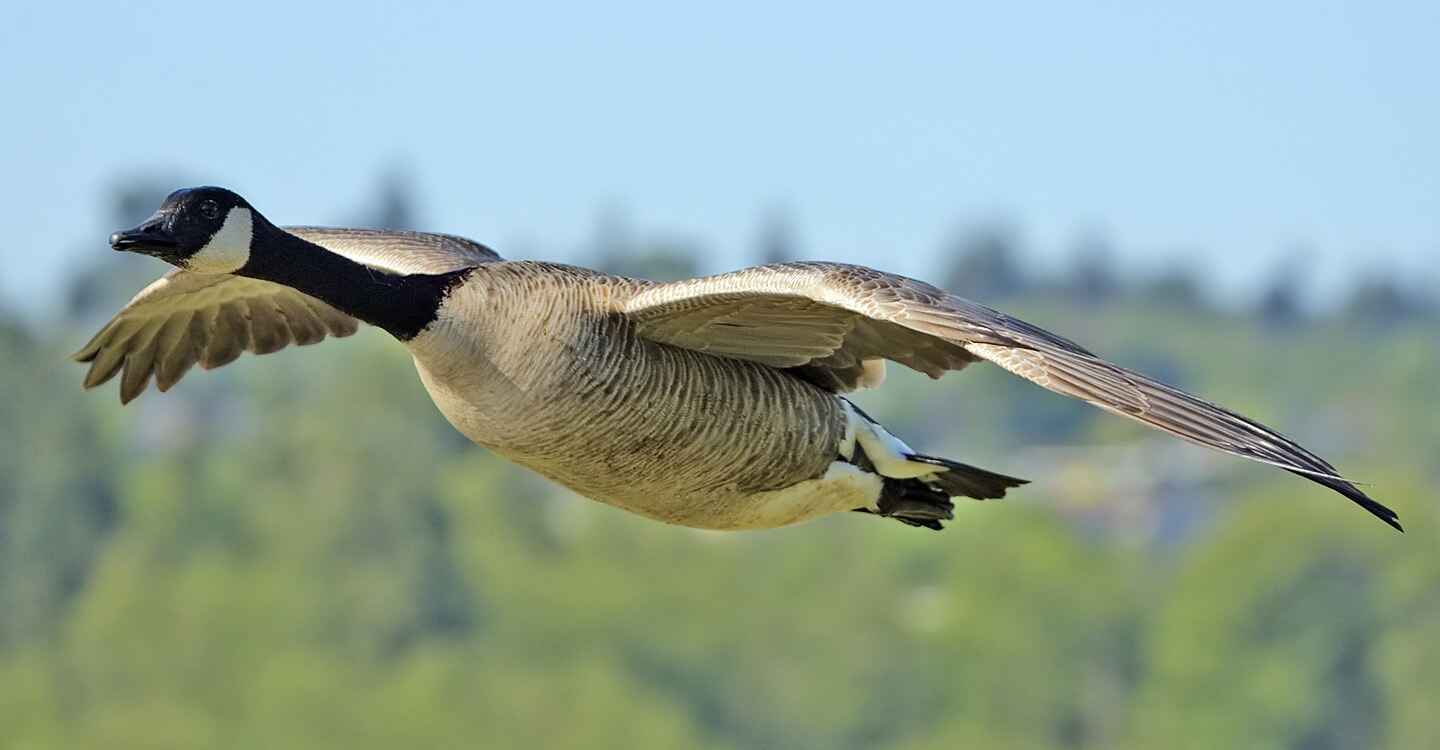 Goose (plural: geese) is the English name for a considerable number of s, belonging to the family . This family also includes s, most of which are larger than geese, and s, which are smaller.

This article deals with the true geese in the , tribe Anserini.

A number of other waterbirds, mainly related to the s, have "goose" as part of their name.

True geese are medium to large birds, always (with the exception of the Nēnē) associated to a greater or lesser extent with water. Most species in , , and are strongly migratory as wild birds, breeding in the far north and wintering much farther south. However, escapes and introductions have led to resident feral populations of several species.

Geese have been for thousands of years. In the West, farmyard geese are descended from the Greylag, but in Asia the has been farmed for at least as long.

All geese eat a vegetarian diet, and can become pests when flocks feed on arable crops or inhabit ponds or grassy areas in urban environments. They also take s if the opportunity presents itself; domestic geese will try out most novel food items for edibility. Geese usually mate for life, though a small number will "divorce" and remate. They tend to lay a smaller number of eggs than ducks but both parents protect the nest and young, which usually results in a higher survival rate for the young geese.

Not all couples are heterosexual, as both females and males will form long-term same-sex couples with greater or lesser frequency depending on species. [Bagemihl (1999): pp.479-481. More detailed data exists for , , and .] Of the homosexual couples, a significant proportion are non-breeding despite having an active sexual life.

"Goose" in its origins is one of the oldest words of the s (Crystal), the modern names deriving from the proto-Indo-European root, "ghans", hence "hamsa" (feminine "hamsii"), Latin "anser", Greek "khén" etc.

In the s, the root word led to Old English "gos" with the plural "gés", German "Gans" and Old Norse "gas". Other modern derivatives are Russian "gus" and Old Irish "géiss"; the family name of the cleric is derived from the Czech derivative "husa".

The male goose is called a gander (Anglo-Saxon "gandra") and the female is the goose ("Webster's Revised Unabridged Dictionary (1913)"); young birds before fledging are known as goslings. A group of geese on the ground is called a gaggle; when flying in formation, it is called a wedge or a skein (see also ).

The following are the living genera of true geese:
* "Anser" - Grey Geese, including the and the
* "Chen" - White Geese (often included in "Anser")
* "" - Black Geese, such as the

The following two genera are only tentatively placed in the Anserinae; they may belong to the s or form a subfamily on their own:
* "" - Cape Barren Goose
* "Cnemiornis" - New Zealand Geese (prehistoric)

Either these or - more probably - the goose-like is the closest living relative of the true geese.

s of true geese are hard to assign to genus; all that can be said is that their fossil record, particularly in , is dense and comprehensively documents a lot of the different species of true geese that have been around since about 10 in the . The aptly-named "Anser atavus" ("Great-great-great-grandfather goose") from some 12 million years ago had even more ies in common with swans. In addition, there are some goose-like birds known from remains found on the . See for more.

The , "Cyanochen cyanopterus" belongs either to these, or to lineage closer to ducks.

The , "Plectropterus gambensis", is most closely related to the shelducks, but distinct enough to warrant its own subfamily, the .

The three species of small waterfowl in the genus "" are named "pygmy geese", e.g. the ("N. javanica"). They seem to represent an ancient lineage like the Cape Barren Goose and the Spur-winged Goose.

A genus of prehistorically s, "", is sometimes called "diving-geese" due to their large size.

The unusual is in a family of its own, the Anseranatidae.

The , a seabird, is also known as the "Solan Goose" although it is a bird unrelated to the true geese, or any other for that matter.