As of 2006[update] the launch vehicle was to be assembled at the Blue Origin facility near Seattle, Washington. Also in 2006, Blue Origin started the process to build an aerospace testing and operations center on a portion of the Corn Ranch, a 165,000-acre (668 km2) land parcel Bezos purchased 40 km north of Van Horn, Texas.[2] Blue Origin Project Manager Rob Meyerson has said that he selected Texas as the launch site particularly because of the state's historical connections to the aerospace industry, although that industry is not located near the planned launch site, and the vehicle will not be manufactured in Texas.[3]

A sub-scale demonstration vehicle made its first flight on November 13, 2006.[dated info] 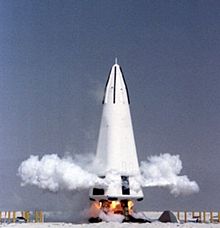 Liftoff of a DC-X, the reported design inspiration for the New Shepard

The New Shepard craft is planned to be a vertical take-off/vertical landing (VTOL) system. The New Shepard will be controlled entirely by on-board computers, without ground control. It will be powered by high test peroxide (HTP) and RP-1 kerosene. [4]

The New Shepard is expected to be launched vertically from West Texas and then perform a powered flight for about 110 s and to an altitude of 40 km. The craft's momentum would continue to carry it upward in unpowered flight and would decelerate until culminating at an altitude of about 100 km. After reaching apogee the vehicle would perform a descent and restart its main engines a few tens of seconds before vertical landing, close to its launch site.[4] The total mission duration is planned to be 10 minutes.

Initial low altitude flight testing (up to 600 m) with subscale prototypes was scheduled for the fourth quarter of 2006.[3] This was later confirmed in a press release by Blue Origin.[5] It could involve up to ten flights. Incremental flight testing to 100 km altitude was planned to be carried out between 2007 and 2009 with increasingly larger and more capable prototypes. The full-scale vehicle was expected to be operational for revenue service in 2010,[dated info] and could fly up to 50 times a year. Clearance from the FAA is needed before test flights begin, and a separate license is needed before commercial operations begin. The company held a public meeting on 15 June 2006 in Van Horn, as part of the public comment opportunity needed to secure FAA permissions.[3] Blue Origin says that once cleared for commercial operation, they would expect to conduct a maximum rate of 52 launches per year. The RLV would carry three or more passengers per operation.[6]

An initial flight test took place on November 13, 2006 at 6:30 am local time (12:30 UTC);[7] an earlier flight on the 10th being canceled due to winds. This marks the first developmental test flight undertaken by Blue Origin. The flight was by the first prototype vehicle, known as Goddard. The flight to 285 feet (87 m) in altitude was successful. Videos are available on the Blue Origin website[8] and elsewhere.

The vehicle is known only as "PM2" as of August 2011, gleaned from information the company filed with the FAA prior to it late August high-altitude, high-velocity second test flight. Media have speculated this might mean "Propulsion Module".[10]

The second test vehicle was flown a second time[9] on an August 24, 2011 test flight, in west Texas. It failed when ground personnel lost contact and control of the vehicle. The company recovered remnants of the space craft from ground search.[11] On 2 Sep 2011, Blue Origin released the results of the cause of the test vehicle failure. As the vehicle reached Mach 1.2 and 45,000 feet (14,000 m) altitude, a "flight instability drove an angle of attack that triggered [the] range safety system to terminate thrust on the vehicle."[9]

Additionally, Blue Origin received US$3,700,000 in CCDev phase 1 to advance several development objectives of its innovative 'pusher' Launch Abort System (LAS) and composite pressure vessel[12] As of February 2011[update], with the end of the second ground test, Blue Origin completed all work envisioned under the phase 1 contract for the pusher escape system. They also "completed work on the other aspect of its award, risk reduction work on a composite pressure vessel" for the vehicle.[13]

A simple web site was published in June or 2007 at domain public.blueorigin.com, but was moved to blueorigin.com shortly after the first launch in November of that year.