Duracell is a brand of batteries manufactured by Procter & Gamble.

Duracell manufactures alkaline batteries in many common sizes, such as AAA, AA, C, D, and 9V. Lesser used sizes such as AAAA (primarily for pagers, penlights, and blood glucose meters) and J size batteries (for hospital devices) are also manufactured along with a range of "button" batteries using zinc-air, silver-oxide and lithium chemistries, used in calculators, watches, hearing aids, and other small (mostly medical related) devices. Duracell entered into a brand licensing agreement with flash memory manufacturer Dane-Elec in 2008 for a line of products including memory cards, hard drives and USB flash drives with the Duracell brand mark and in the brand's trademark "copper top" coloring.[2]

Duracell also manufactures specialty batteries, including NiMH rechargeable batteries and batteries for cameras, watches, hearing aids, etc. Their two main battery brands are "Coppertop," marketed as longer-lasting, and "Ultra," directed mainly at users of digital devices and devices that need more power. Duracell also has a line of lithium chemistry batteries and products, now manufactured outside of the U.S. 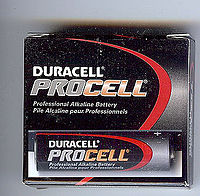 A Duracell Procell AA box with the battery superimposed 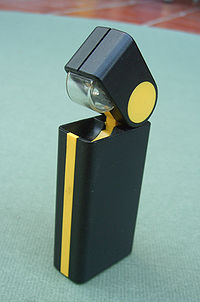 A Duracell flashlight from the 1980s

In recent years, Duracell's innovations expanded to include new battery designs with their prismatic batteries, which are prismatic in shape rather than cylindrical. Prismatic cells were made available in both alkaline and lithium designs. In 2006, Duracell introduced "Power PixTM" batteries with NiOx technology, designed to supply longer life in digital cameras and other high drain devices by up to twice the number of photos typically achievable with alkaline batteries.

Duracell originated via the partnership of scientist Samuel Ruben and businessman Philip Rogers Mallory, who met during the 1920s. The P.R. Mallory Company produced mercury batteries for military equipment, trumping the carbon-zinc batteries used then in virtually all applications. During the 1950s, Kodak introduced cameras with a flash: the design required a new cell size, and size AAA was developed.

In 1964, the term "Duracell" was introduced as a brand. The name is a portmanteau for "durable cell."

P.R. Mallory was acquired by Dart Industries in 1978, which in turn merged with Kraft in 1980. Kohlberg Kravis Roberts bought Duracell in 1988 and took the company public in 1989. It was acquired by Gillette in 1996.

Dynacharge was owned by Duracell.

In September 2011, Duracell and Powermat Ltd. have made a joint venture, called Duracell Powermat to make small wireless charger for mobile phone and small electronics. P&G will own 55 percent of the joint venture shares and the rest is for Powermat.[3]

Duracell's advertising campaigns in the United States have always outlined the reliability of Duracell batteries, and usually end with a three-note chime highlighting each syllable in the brand name (and previously highlighting the trademark "copper top" portion of the battery's overlay wrapping). These campaigns show people using the battery to power the devices they find most important: everything from a Defibrillator to a BrickHouse Child Locator.[4]

Some of Duracell's most notable advertising campaigns include: